Send the Eritrean refugees Home: they are just economic migrants”.

By Petros Tesfagiorgis Striking a chord: The protest in London was successful: I joined the protest late at 4.00 pm.  It started a 3.30.   The place in front of the Hammersmith Town Hall was alive with 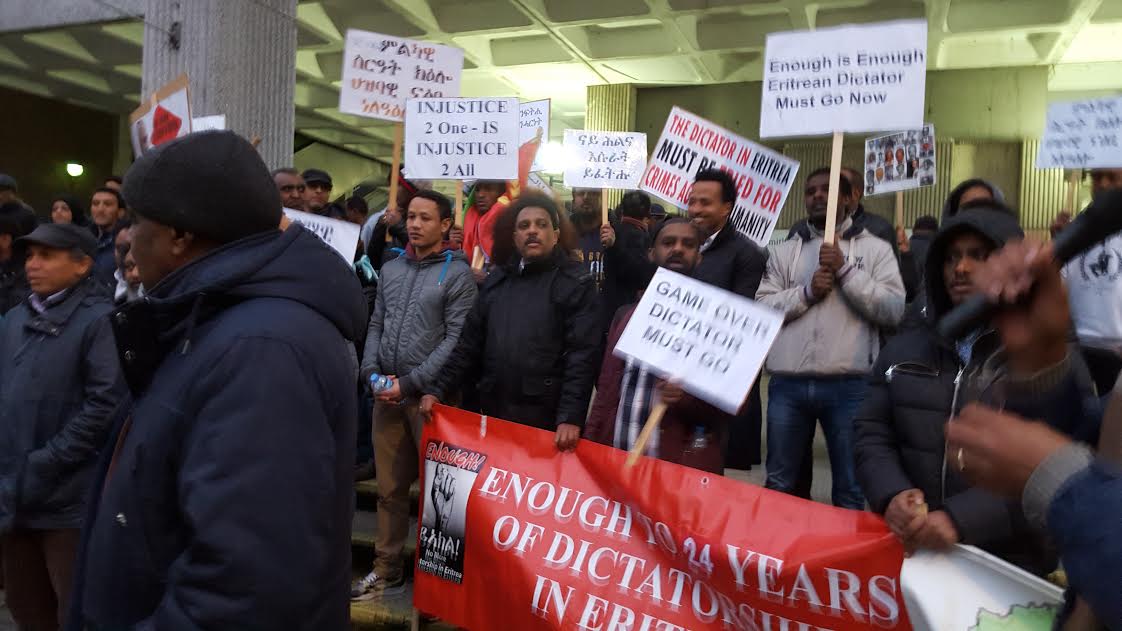 Striking a chord: The protest in London was successful: I joined the protest late at 4.00 pm.  It started a 3.30.   The place in front of the Hammersmith Town Hall was alive with vibrant voices. Voices with slogan such as “shame of you” referring to those walking to attend the meeting.  Some of them bow their heads in shame. In that moment in time the protesters relentless spirit and enthusiasm will make your heart race with pride. Here we see a hint that what brings success in the fight against  injustice is action oriented activities. Yes here is the UK justice seekers collective voice. All organisations representing political, civic, women, youth, human rights and humanitarian were there.  Discipline, solidarity and love were the atmosphere in this protest.  Even the British police were impressed – they were watching from a distance. Only one or two officers were coming near to liaise with the organisers.    Some of the slogans say “Injustice to one is injustice to all” “Enough is enough the dictator must go now”  “Release all prisoners of conscience”,  “ናይ ሕልና እሱራት ይፈትሑ”

The protest which took place on Sunday 31 January 2016 was against the meeting designed to cover up the gross human rights violations in Eritrea. It is called by the Eritrean Ambassador in UK.  The rally dubbed the “Mekete” Momentum – is aimed to render the report of the UN Human rights Inquiry Commission on Eritrea as false concocted by enemies of Eritrea. The supporters of the regime   are pressurised to campaign that there is no human rights violations and sexual abuse of women in Eritrea. It is the economy (poverty) that is driving Eritreans to seek refugees abroad.

The supporters of the regime were making a fool of themselves.  The refugee issue has taken centre stage in the media internationally since the death of 360 Eritreans drowned in the Mediterranean Sea in October 2013.   The world has learned the truth about the brutal and ugly repression in Eritrea. The fact that the regime bull dozed plenty of newly built houses rendering people homeless showed the level of brutality never witnessed in any other countries governed by dictators.  Of course the people are impoverished –Eritrea is declared as one of the poorest country in the world because human rights violations are incompatible with social and economic progress. In addition, it was before the engagement of the UN Inquiry commission that the violations were documented by Amnesty International, Human Rights Watch, and journalist without borders.   And by   the campaign of the Eritreans human right protesters such as the moral priests Aba Mussie, Keshi Athanasius Ghebre-ab, and the human rights lawyer Daniel Mekonen. Also are the energetic women human rights campaigner such as Dr Alganesh Fesseha, Elsa Chyrum, Meron Estifanos, Feven Hadera, Khedijah Mohamed Nur, Selam Kidane, Lul Syoum, Feruz Keisi   and sister Azezet. In collusion with the Inquiry commission are all these people and organisations lying?  For the supporters of the PFDJ oppressive regime and their foreign apologists there is no room to hide in the wider world. The victims and relatives of the victims themselves are talking loudly. The victims are not just numbers they are people and there is serious consequence for the perpetrators of the injustice including allegation of “Crime against humanity” to be substantiated by the further extension of the work of the UN inquiry commission.

The Eritrean Government is tyrannising the people of Eritrea with a regime of spies and bribes, and ruthlessly crushing any sign of independent spirit.   The indefinite national service that robbed the youth of their future forced thousands into exile.  Today there are more than 10,000 prisoners of conscience. Most of the exiles are in Africa. More than 120,000 Eritreans are languishing in refugee’s camps in Ethiopia and about the same number in Sudan others are scattered in different African countries and the Middle East.  In Europe Eritreans are the second largest group of asylum seekers after the Syrians.   According to UNHCR there are 400,000 refugees from Eritrea about 8% of the population.

As we protest outside in the cold I saw a person I know who recently came from Asmara walking to the meeting place. He was unsuccessful in trying to hide his identity.    I could not believe my eyes remembering what he told me when we accidently met in a pub.   As soon as he made it to his house from the airport, his father told him that he borrowed money to buy a sheep to be slaughtered in his honour. He asked his father, why borrow, what about the money he send him.  His father said “Yes we have money in the bank but they don’t let us draw more than 5000 Nakfa a month and by the time you ring you are coming we were short of money and we are forced to borrow”. His father told him that the traders are in a dire situation – they can’t buy items to fill their shelves.   Some of them have their imported commodities in the port of Massawa and the authorities refused to clear them.  The goods are perishing and the traders are losing.  It is as a result of a sudden change of currency that crippled economic activities and people are getting hungry despite having money in the Bank.

Seeing the friend in this humiliating situation and most of the supporters may be in the same situation, I became more aware of the moral bankruptcy and loss of esteem these supporters seem to embody. They are willing to prostitute themselves in surprising degrading way. I pity them instead of resenting them

The good news is that the UK Justice Seekers have started to play an important role in raising consciousness and setting an activist agenda. It is in taking collective action that solidarity among various activists is forged and unity achieved.

However, the UK Justice Seekers have to link up with the international community who stand for justice peace and freedom. In the United Kingdom    there are 85 “Welcome Refugees” groups. As of recent they have formed a board in order to coordinate UK nationwide. These is  phenomenal , very impressive and we have to learn from them.  Therefore the motto of justice seekers must be to work in unison not in isolation.

In conclusion I would like to hail the demonstrators most of them were young. They are living in truth while the supporters are living a life of lies. It may be of  fear, opportunism and mere short sightendness.