The Kingdom’s police and security agencies arrested 11,756 violators of residency and labor laws on the third day of the clampdown on illegal workers across the country, according to reports from Makkah, Jeddah, Al-Jouf, Northern 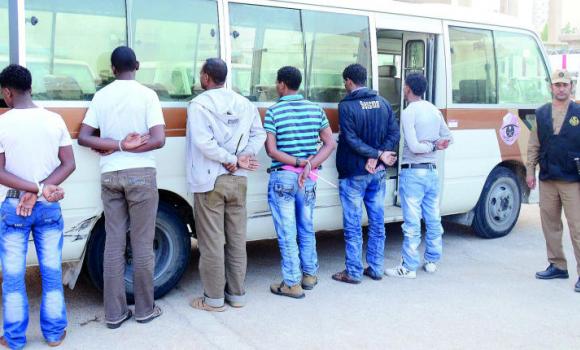 The Kingdom’s police and security agencies arrested 11,756 violators of residency and labor laws on the third day of the clampdown on illegal workers across the country, according to reports from Makkah, Jeddah, Al-Jouf, Northern Border Province, Renia, Dhahran Al-Janoub and Sajer.
Lt. Nawaf Al-Bouq, spokesman of Jeddah police, said officers raided the hide-outs of illegal workers, which detectives had earlier identified.
“The raids netted 3,918 persons on the first day, while 3,877 violators were arrested on the second day. The operations are continuing as planned,” he said.
He said the city’s detention center has been refurbished to hold large numbers of detainees of both sexes. “The detention facility has an unlimited capacity and is guarded by security on all sides. Medical, Civil Defense, first aid, utilities and humanitarian services are available around the clock.”
In a predawn raid Tuesday under the direct supervision of Riyadh’s Deputy Gov. Prince Turki bin Abdullah bin Abdulaziz, around 376 violators were nabbed in the Manfouha district.
The daylong raids resulted in the arrest of 818 illegal expatriates in Riyadh. The raids were conducted by officers of Riyadh police in the presence of the deputy governor on a special directive from Riyadh Gov. Prince Khalid bin Bandar bin Abdulaziz.
According to a spokesman of Riyadh police, the arrested foreigners were of different nationalities. Some of them were drunk or in possession of light weapons.
During the raid in Manfouha, police closed exit routes. The raid there began at 5:30 a.m. and lasted 90 minutes, he said, adding that women were among the detainees.
On Tuesday, Makkah police arrested 3,483 undocumented expatriates, said Col. Badar Al-Saud, spokesman of the city’s police.
He said officers apprehended 8,683 violators on the first and second days of the campaign. They are being held at the Al-Shumaisy General Service Center to record their biometric details and prepare them for deportation. Those who have criminal records would be handed over to police.
The director of police in Sajer said 75 unidentified or undocumented people were arrested in the town and nearby villages. They were from Somalia, Ethiopia and Eritrea. He said some were arrested while hiding in an underground petrol tank, while others turned themselves in when they saw police approaching.
Brig. Bandar Al-Eida, spokesman of the Northern Border Province, said officers arrested 93 violators on Wednesday. They now face legal action.
The spokesman of the Al-Jouf police said officers arrested 214 illegal workers in Sakaka and other parts of the province on the first two days of the campaign.
Brig. Obaid Al-Darami, director of Al-Jouf police, appealed to citizens to cooperate with the campaign and not shelter or employ undocumented foreigners. He also urged them to report illegal workers.
In Renia, 30 people were arrested in Janoub Al-Dahran on Wednesday, while 62 people were arrested over the first two days of the campaign, according to police sources.