On February 4th, 2013 about 150 Eritrean youth, elders, and others at different age groups that included women, non-Eritrean human rights activists and friends of Eritrea, traveled to Ottawa from cities across central and eastern 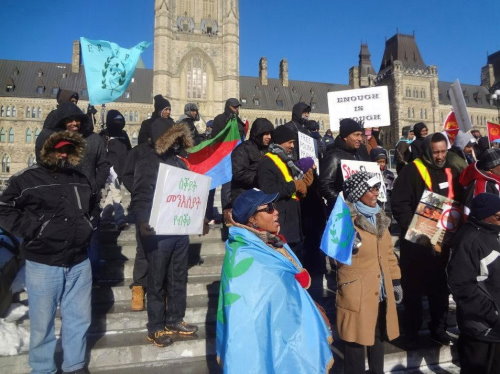 On February 4th, 2013 about 150 Eritrean youth, elders, and others at different age groups that included women, non-Eritrean human rights activists and friends of Eritrea, traveled to Ottawa from cities across central and eastern Canada. As their first destination, all gathered in front of Parliament Hill, holding signs whose candid messages included, “Protection for Eritrean Refugees”, “Democracy & Justice in Eritrea”, “We Support Forto 2013”, and “Enough is enough!”

After a loud and inspired protest outside Parliament Hill, in which politicians and supporters stopped to lend their support and explicit sympathy, protesters marched across downtown Ottawa. The next stop was the United Nations High Commission for Refugees (UNHCR), where the protestors took over the street outside the building. Many young Eritrean men and women who just escaped from the Sawa Military Training,  refugee camps in the Sudan, returnees from Israel, and survivors of the Sinai tragedies spoke, fighting tears, about their first-hand experiences depicting the pains, sufferings and miseries of the Eritrean refugees and the details of the  tragedies hovering over them. Those were very emotional moments for everybody listening to them, irrespective of who the listeners were.  Their terror stories electrified the whole atmosphere and showed that the international community has to counter a serious human tragedy dangerously evolving in this modern world, inspiring soul searching and enabling everybody to conclude that  Eritreans are left on their own. To give an overall picture to the readers, we cannot resist the temptation to mention some of the issues raised by way of bringing things to the attention of the UNHCR officials and reminding them of their duties.

It was brought to the attention of the crowd and the UNHCR officials by some protestors that each year an estimated number of 252,000 Eritreans escape from the fascist state, which pays no attention to the rights of a citizen, but on the contrary sees him/her as a mere tool born to protect the ruling power only and be the cannon fodder for its unjust wars.

Some of the speakers articulated, with a sad tone, that those escapees who cross to the Sinai Desert have to travel under great threat of being kidnapped by the Bedouins, held for ransom going as high as US $35,000, and having their organs harvested and left to die.  Thus the Eritrean refugees, according to those speakers, changed hands from the human hyenas of the Sinai Desert to their non-human counterparts to tear the remaining organs. It was indicated by some protestors that up to 4,000 Eritrean bodies are believed to have been buried in mass graves scattered across the northern Egyptian desert.  It was also emphasized in the briefings by informed protestors that those living in the UNHCR refugee camps in the neighboring Sudan are not safe either. Furthermore, to the dismay of UNHCR authorities, it was informed that most recently, Rashaida Bedouin kidnappers have started bribing UNHCR workers at the Shegerab refugee camp. In this connection, it was shockingly stated that small bribes get the Rashaida access to the camp and to the lives of the women and children within it. According to one of the protestors, last April, international media reported that 600 Eritreans were being held in “slave holding lots” few kilometers west of the Shegerab camp. The same protestor informed the gathering in front of the UNHCR building that the kidnappers were later tied to a network of corrupt UNHCR workers profiting off the Eritreans who turned to them for refuge and protection, this way, depicting that the hound turned into a wolf. Other criminal acts committed on Eritrean refugees, as described by the protestors, included rape and sexual violence against women and were described by one as routine practices in and around the Sudanese refugee camps.

Though protestors gave all of the above explanations, figures and details about the horror Eritrean refugees are daily going through outside their country, to hold the refugee office responsible for its failure, the simple message to the UNCHR was:   “Do the job you are entrusted with! Protect Eritrean refugees and stop organ trafficking in the Sinai”.

The last stop of the protestors included the Sudanese and the Egyptian embassies, where the protestors met with representatives of each embassy and made their humanitarian demands clear and simple. As the crowd dispersed to return to their homes across the country, they left with the optimistic feeling that something would be done by all parties addressed. Nevertheless, though they realized that the ball is at the quarters of those addressed, they never missed the point that the struggle will continue, until the final victory, in a more coordinated, effective and productive manner to make the voice of the voiceless heard.

It was their people’s unrelenting determination that inspired the protestors to keep moving forward and dream for a better tomorrow. As Eritreans struggling for freedom, peace, social justice, democracy and equality, we are strong believers that every protest we organize, every article we write, and every word we speak out on the violence and state terrorism committed by the fascist  and police state, moves us closer to the aspirations of our voiceless people.

Joining the Forto 2013 global movement is the only way that makes our resistance gain the desired momentum, leads to a radical change and enables us to build, on the graves of the fascist dictatorship and all its medieval institutions, the new Eritrea where Eritreans of all religious, ethnic, cultural, social and political backgrounds will live in peace, freedom, equality, justice and democracy to catch up with the civilized world from which it was made to lag behind. This is a national call every Eritrean has to answer.

Glory to our National Defence Forces!