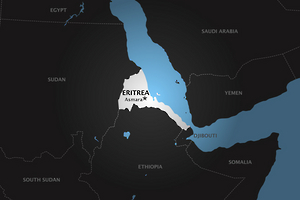 We are pleased to announce the merger of EGS and EFND to form Eritrean Global Solidarity for National Dialogue (EGSND).

After a year of intensive dialogue and conversation, the two civic societies, the EFND & EGS met in Washington DC on March 10, 2018 to finalize the merger. Each presented the summation of their years of experience as a part of the reflection before moving forward to outline their vision, program, policy and protocol. Going forward both underscored the urgency of national responsibility and decided to fully merge to step up their efforts in 2018.

The significance of the unity between two civic societies advocating for democratic changes in Eritrea is immense. The current situation in Eritrea demands that our effort is focused toward eradicating the vestiges of tyranny in Eritrea. Thus, the measure taken by EGS and ENFD is a milestone in our civic struggle.

The members of the two organizations realized the synergistic value of their merger, given their common objective. The members agreed on the new name, the constitution, mission statement and organizational structure of the new organization.

EGSND is formed as a 501 (c) (3) independent, nonprofit civic organization “dedicated to the protection of human rights and strengthening of democratic institutions in Eritrea.” The primary objective of EGSND is “to speed up the salvation of the Eritrean people and to explore means and methods that would facilitate and accelerate the democratization of Eritrea.”

The merger of EGS and EFND is expected to set a good example to the other Eritrean organizations that much can be accomplished through unity.

Our Mission Statement and Objectives are as follows.

The EGSND is an independent, nonprofit civic organization dedicated to the protection of Human rights and strengthening democratic institutions in Eritrea.

EGSND takes initiatives to sponsor joint projects and organize events to create awareness and promote justice, democracy and human rights in Eritrea through the following activities

(a) To promote dialogue among Eritreans and their various organizations on current challenges and issues facing Eritrea; build and strengthening the role of civil societies, individuals, diverse communities and other Non-Governmental Organization

(b) To promote human rights and democratic transformation through civic engagement

(d) To educate communities and civil society organizations to build their capacity to better defend their economic, social and political rights;

(e) To build vibrant and democratic institutions accountable to the people/citizens.

(g) To lobby and advocate for human and political rights.

EGSND will have nine Board Members. The Board will appoint five among the Board members who will serve as the Executive body, composed of the Executive Director, Secretary, Treasurer, Organizational Affairs person and Media and Public Relations Executive.

The following individuals have been elected to serve as Board Members for a three year term.