HUNDREDS of refugees are feared drowned after their boats capsized in the Mediterranean. Around 40 survivors, migrants mainly from East Africa, told the BBC last night up to 500 people had died. According to earlier media reports, 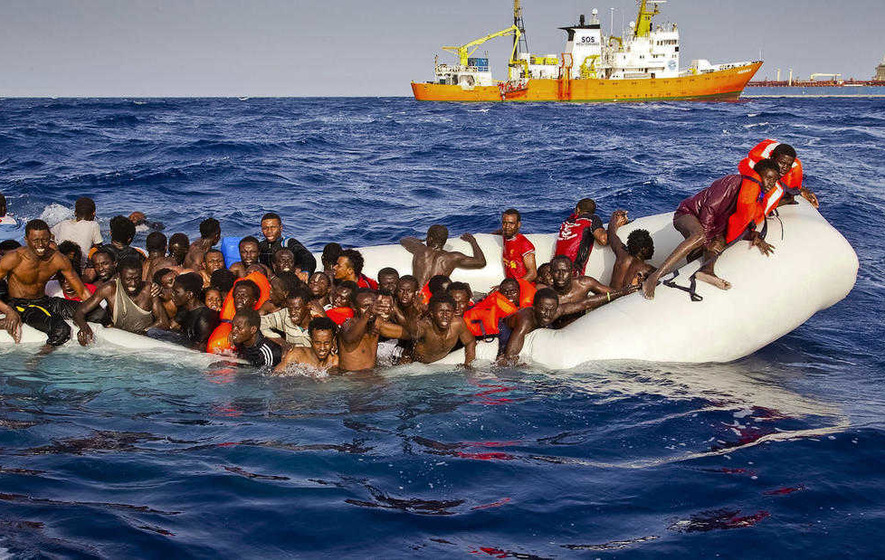 HUNDREDS of refugees are feared drowned after their boats capsized in the Mediterranean.

Around 40 survivors, migrants mainly from East Africa, told the BBC last night up to 500 people had died.

According to earlier media reports, hundreds of people died after their four boats capsized near the Egyptian coast, believed to be sometime on Sunday.

However neither the Italian nor Greek coast guards have confirmed what would be one of the worst migrant disasters in recent years.

UN refugee agency spokesman William Spindler said: “Our offices in Egypt, Italy and Greece are trying to find out more about this reported incident but, so far, we cannot confirm it”.

The survivors are being held in the southern Greek city of Kalamata.

Earlier, six bodies were found and 108 migrants were rescued from a dinghy, Italy’s coast guard said.

The migrants, believed to be Ethiopians, Somalis, Sudanese and Egyptians, and the six bodies were taken to Lampedusa.

Italian President Sergio Mattarella said Europe needed to reflect in the face of “yet another tragedy in the Mediterranean in which, it seems, several hundred people have died”.

The deaths come a year after up to 800 people were killed when a migrant boat sank in the sea between Libya and the Italian island of Lampedusa.

Italian naval ships yesterday began attempts to recover the boat from the sea-bed. Two suspected smugglers, a Syrian and a Tunisian, are on trial in Sicily charged with multiple counts of manslaughter, causing a shipwreck and aiding illegal immigration.

Catania Mayor Enzo Bianco told a news agency: “Exactly one year after the biggest disaster in the history of migration in the Mediterranean in the new millennium, we are experiencing an absurd replay”.

“Europe and the world should not be distracted from yet another terrible tragedy,” he said.

The UN said 180,000 people have attempted to reach Europe by sea this year, with the loss of almost 800 lives.

The crossing between Libya and Italy is the deadliest sea route in the world.

The number of migrants travelling to Italy in the first quarter of 2016 was almost double the number of arrivals in the same period last year.

Oxfam Ireland said the EU was “failing utterly” to solve the refugee crisis.

“Exactly a year ago, 800 people died off the coast of Lampedusa in the Mediterranean. We said that must never happen again, that we would no longer watch bodies washing up on Europe’s shores. One year on, nothing has changed.”

He said EU leaders must “ensure safe and legal passage to Europe”.