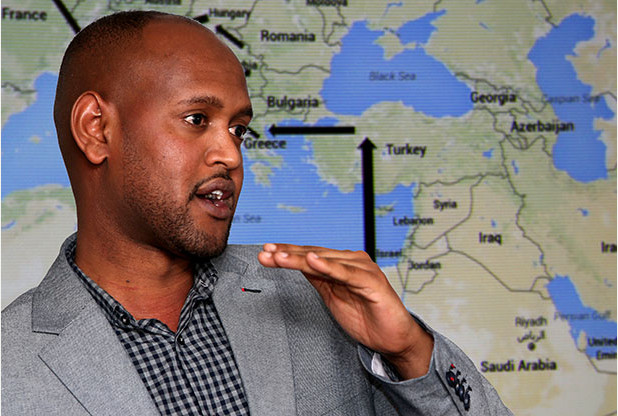 The 29-year-old fled the military dictatorship in his homeland and has called for the British government to do more to stop the regime’s crimes.

Ezedin wants to return to the east African country, which has an estimated monthly exodus of 5,000 people, if the regime is removed.

He is studying for a master’s degree in pharmacology at Nottingham Trent University, because many of his countrymen are unable to access basic medicines such as paracetamol.

They often travel to neighbouring countries, like Sudan, for treatment, which is what Ezedin’s mother attempted before she died in 2014.

The Forest Fields resident, whose fellow refugees in full-time work are helping him pay his fees, said: “Hopefully, one day, the situation will improve and I can go home and help the people.

I don’t want anything like what happened to my mum to happen to anyone else but there are many other people in my mother’s situation. I chose pharmacy because I don’t want to see this happen again.”

When he left Eritrea, Ezedin travelled for 11 days through mountains to reach Sudan, a journey that takes four hours by car. Smugglers then helped him board a flight to Turkey using a fake passport and he entered Greece via a dingy over the Mediterranean Sea.

He walked through Albania, Montenegro and Serbia to Italy, where he caught a train to France. He spent three nights in November 2013 living at the infamous “Jungle” in Calais, before crossing to the UK.

He said: “It’s like living in the rain, with no proper shelter or food. You don’t have a house, or a room, to stay in.

“When you make the journey, you are not sure you are going to survive. You know your life is 50-50 but you are willing to take that risk.

“Compared with what is going on in my country, being in Calais is like heaven. At least you breathe fresh air and feel a sense of freedom.

“The way the French authorities treat you is dignified. They just ask you to go back and walk away. In my country, if you get caught crossing the border, they shoot you or keep you in a shipping container all your life.

“In a free society, they don’t fathom that this sort of thing can happen to another human being.”

On the third night of trying, Ezedin sneaked into a lorry.

He said: “I think it went on a train. I got into the vehicle at 2am, we left France at 6am and we made it to the UK at 10am. It is scary because you don’t know where you are going to end up, or whether you will end up suffocating.”

After being granted asylum, he was housed in Nottingham, where, generally, he gets a warm welcome.

He said: “Most people listen to you and sympathise. There are some who listen to the right-wing media, which is scaring a lot of people in the UK. But refugees are not here to take people’s jobs. We are not migrants; the two are often confused. We come because of the danger in our homeland. We are here for protection.”

Since arriving, Ezedin has spoken about the refugee crisis to, among others, members of the Notts Alternative Film Network, which showed the award-winning film A Syrian Love Story over Christmas at Beeston’s Cafe Roya., in Wollaton Road.

Ezedin said: “It doesn’t get as much coverage as Syria. But everyone is suffering. It’s getting worse and worse.”

Eritrea has had a military dictatorship since 1991, when it gained independence from Ethiopia. Ezedin says the exodus began in 1998, when the country was plunged into a two-year war with its former rulers.

He wants Britain, and other western countries, to take a more active role in Africa’s politics.

He said: “The problem is systematic oppression. Britain is giving the country money but they spend that on more prisons. If Britain cannot remove the regime, then I would ask them to stop supporting it.”

He still speaks to his father, two brothers and sister by telephone. “I can’t ask them about the situation, because it’s hard for them to speak freely.

“But I can tell by the tone of their voices that things are no better.”

Mr Walton said: “Ezedin has been a fantastic volunteer.