Assenna.Com “I DIDN’T DO IT FOR YOU”, the much admired book by Michela Wrong that was first published in 2005 is now being brought out - for the first time - in Italian by Edizioni Colibri, 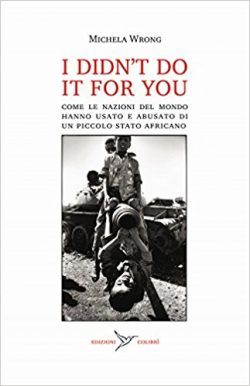 “I DIDN’T DO IT FOR YOU”, the much admired book by Michela Wrong that was first published in 2005 is now being brought out – for the first time – in Italian by Edizioni Colibri, an Italian publisher.

The story of Eritrea, as depicted by Michela Wrong, is a very vivid, penetrating and wonderfully detailed account of ‘How the World Betrayed a Small African Nation’.  Wrong managed to unearth the long history of abuses, and through those narratives, the very heart and soul of the Eritrean people and their struggle to shape their destiny.

In this pivotal account, Wrong does not only reveal certain anecdotes with a sharp eye for unique attributes and a taste for the out of the ordinary, she also adds a twist that beguiles her readers.  The narrative crosses over to a new frontier which, generally speaking, was unfamiliar to her readers, in general, and Eritreans, in particular. Although Wrong was kind in her conclusion, she somehow brought to light that an abused country ends up abusing its own people.

The book is about how “native politics” was imposed on Eritreans as it was played out by non-natives. How did the dispossessed people of Eritrea variably contest settler societies?  It is fascinating to read not only how dispossession occurred, but how it has been contested, how insurgency politics was built, rebuilt, protected against institutional hostility, and how, in the end, the politics of self-consumption set in.

It makes sense to publish the book in Italian due to the fact that the history of Italy and that of Eritrea have been intertwined for more than forty years. Assenna.com hopes one day to see editions in Tigrinya and Arabic published.

I didn’t do it for you