Reporter Michael Abraha called upon Wolde Yesus Ammar in Switzerland to have his views and analysis on the Eritrea sanctions, Ethio-Eritrea relations and why EPDP remains outside of the new Eritrean National Democratic Assembly – 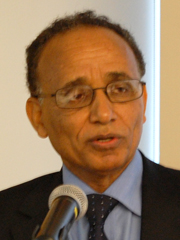 Reporter Michael Abraha called upon Wolde Yesus Ammar in Switzerland to have his views and analysis on the Eritrea sanctions, Ethio-Eritrea relations and why EPDP remains outside of the new Eritrean National Democratic Assembly – largest political bloc embracing dozens of Eritrean political parties, factions, civic organizations, intellectuals and religious personalities. Wolde Yesus begins by evaluating the current Eritrean state of affairs and the on-going struggle for freedom and democracy?

Wolde Yesus Ammar: The situation in Eritrea remains to be extremely bad and sad. One does not need to make additional description to what had been repeatedly said about it in the past. But only to stress, the worst part of this worsening condition of our people is the frightening loss of hope, and the young generation’s fast growing desperation and dispersal. We cannot deny that we are witnessing the breaking down of our society on a daily basis. And, unfortunately, most or all of those who leave the country for exile may never come back. That is horrifying.

For sure, the anti-peace and anti-democracy regime in Asmara cannot be expected to bring those two grand aspirations of our people: peace and democracy. Equally depressing is the failure of the opposition camp whose lack of purpose and state of fragmentation could not let it deliver change. To repeat the obvious, what is lacking is both unity of action and a clear winning strategy with a clarion clear message to the people. On our part, we see the need of doing all what it takes to promote a winning strategy with clear message to rally the vast majority of Eritreans to remove the regime and then build a new state of institutions.

Q: Does the second round of UN sanctions help or hurt the Eritrean people? How and why?

A: The second round of the UN sanctions will have direct harm on the regime, and that harm can be considered helpful to the struggle of the people for change. It was unfortunate that even the targeted sanctions decided in December 2009 have not been implemented in the past two years. Now, it is hoped that the timely implementation of those sanctions will help weaken the regime. It is good that the new UNSC Resolution 2023 also stresses the obligation of “all States to comply” with the measures imposed by resolution 1907. On top of that, the UN Security Council condemned not only the collection of 2% tax from Diaspora Eritreans, but also decided to see to it that the Eritrean regime stops the collection of that tax without further delay. Otherwise, it can face serious consequences because Resolution 2023 is decided under Chapter VII of the UN Charter.

Q: Are they enhanced enough to make a dent on Isaias’s belligerent foreign policy and do they limit his appetite to interfere in the internal affairs of Eritrea’s neighbours?

A: The UN sanctions imposed in December 2009 were tailored to harm the regime and not the people. Resolution 2023, enhancing the previous resolution, aims to curb the financial resources that the regime used to collect through open extortions from the Eritrean Diaspora. Limiting the regime’s access to those resources can hopefully not only curtail its capacity to interfere in the affairs of others but at the same time also cut funds it used in financing intelligence and security services to repress the people.

Q: Eritrea and Ethiopia are still in a state of war. What is your position on Ethiopia’s keen interest and support of Eritrean opposition forces and its assistance and rehabilitation of refugees who continue to be entering its territory every day?

A: Understandably, governments usually support opposition organizations for the same ends: i.e. to promote their own policies and interests. Ethiopia can claim to have all the right to show keen interest in supporting the Eritrean opposition, or part of it, to get rid of an unwanted belligerent neighbouring regime and to make sure that a future government in Eritrea is not opposed to Ethiopia’s own dreams and interests. Regarding Eritrea and other matters, Ethiopia is free to draw its own strategy, and to support whichever organization it likes. But it is up to Eritreans to scrutinize such strategies related to their fate and take their own decision to make sure that post-dictatorship Eritrea is the Eritrea of their dreams. EPDP has made it clear to all concerned that an opposition divided in two camps will not serve the best interests of Eritreans and other peoples. Similarly, we are of the firm conviction that promotion of ethnic and sectarian politics does not suit the political landscape of Eritrea.

We are very grateful to Ethiopia’s support to our needy refugees. On our part as EPDP, we have been calling on the Europeans, our neighbours and other friends to organize more support packages for Eritrean refugees in Ethiopia and the Sudan so that they could receive proper academic and vocational skills to become useful citizens in post-PFDJ Eritrea.

Q: Would Ethiopia’s unconditional departure from the village of Badme guarantee peace in the region and lead to democratization in Eritrea? If so, how?

A: The final and binding ruling of the Eritrea-Ethiopia Boundary Commission was reached as an arbitration decision. If we conclude that Eritrea and Ethiopia went to war because they could not settle their border problem peacefully, then anything that is reached as an arbitration decision has to be accepted as is if both countries continue to disagree. That is how the arbitration decision is understood. There should not be any pre-condition on the fate of Badme and the rest of the border issues. The acceptance of the border ruling by Ethiopia can reassure many suspicious Eritreans that Ethiopia is not there for muscle twisting against smaller partners in the region. It should also be noted that the Eritrean regime has been hiding behind the excuse of “occupied Badme” from allowing basic freedoms in the country. The unconditional return of Badme to Eritrea can deprive the Eritrean regime of any pretexts. However, one must accept the reality that resolving a border conflict cannot automatically guarantee the peace and democratization anywhere.

Q: Was Badme the main or only motive for going to war?

A: The answer is a big No for both questions. Bame was neither the main nor the only motive for going to war between Eritrea and Ethiopia. It was only a spark for already smouldering conflicts between the two long-time rival forces that assumed power in the region in 1991.

Q: EPDP boycotted the recent Eritrean National Congress in the Ethiopian City of Hawassa although the EPDP breakaway group under Ambassador Adhanom Ghebremariam took part. Why did EPDP decide not to send a delegation to the Congress in which 600 Eritreans were present?

A: We have not been part of the process that led to the Hawassa congress. It did not in any way belong to us. What we were part of and what we boycotted was the conference that took place in August 2010 in Addis Ababa. That gathering in place of our long-dreamt Waela lacked all the necessary cohesion and smooth dialoguing among all stakeholders who intended to make it well prepared, all-inclusive and a success. As you know, they made it fail rushing with their untenable justification of “urgency” to hold that Waela in August 2010. Of course it was a disastrous failure, even if those who pushed for it did not accept this truism.

As to the Hawassa “national” congress, we were long ago denied the opportunity to be part of the process and no one should talk about EPDP boycotting it. It simply did not belong to us and to many other Eritreans whom it excluded. On the other hand, many well-wishing compatriots appear to have been impressed by the big number of up to 600 people who were brought to Hawassa through different and ill-justified arrangements. But numbers alone do not make difference if basic factors necessary for real success are lacking.

Q: What New Year message do you have for the Eritrean people inside and outside the country?

A: Our message as EPDP to the Eritrean people inside the homeland and abroad is to organize stiff resistance and disobey the rule of the lawless regime of Isaias Afewerki and regain their hijacked political and human rights through a people-centred struggle. The good example to follow is what has been unfolding in the Middle East and North Africa during 2011. It can be done. And let the New Year 2012 be the Year for Eritrea. Happy Holidays!
—————————-
mikaelabk@gmail.com
“Media and Human Rights Research Project” – Asking questions in pursuit of democracy and unity in diversity