Police clear up migrant camps in Paris and Calais

By RFI French police officers cleared up on Tuesday morning hundreds of African migrants from a makeshift camp beneath the metro in Paris. Simultaneously, two migrant camps underwent evacuation in the northern port of Calais. About 350 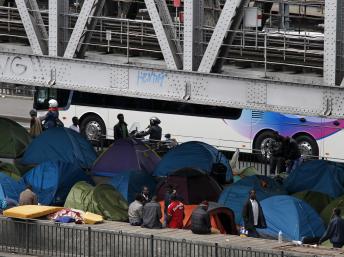 French police officers cleared up on Tuesday morning hundreds of African migrants from a makeshift camp beneath the metro in Paris. Simultaneously, two migrant camps underwent evacuation in the northern port of Calais.

About 350 refugees, most of them from Sudan and Eritrea, but also from Somalia and Egypt, were living in the makeshift camp beneath the metro station Porte de la Chapelle in Paris.

Authorities had put up signs over the weekend ordering them to leave the camp within 48 hours and early Tuesday morning police surrounded the camp which initially sprang up one year ago.

French health minister Marisol Touraine cited sanitary reasons for the evacuation, “Such camps are places that pose a great risk in terms of epidemics and sanitary problems, first and foremost for those living there,” she told France Info radio.

Migrants “must be quickly accommodated with better conditions,” she added as the migrant camp underwent its first stages of evacuation over fears of scabies last week.

“People have been living in excrement and filth for months (…) and don’t have any information about their rights, this situation had to be stopped. It is being stopped and that’s a very good thing,” said Pierre Henry, secretary general of humanitarian association France Terre d’Asile.

Around 9am on Tuesday, the refugees, most of them men but also several families, boarded buses to various shelters in the Paris area.

“Most of the people who wanted to seek asylum are going to welcome centres for asylum seekers, there are also some people who are going to be given refugee status by the French Office for the Protection of Refugees and Stateless People and who will finally be able to build a life for themselves (…) in this country,” Henry said.

According to a survey conducted last week by city authorities and refugees associations, 160 people at the camp wanted to stay in France while 200 intended to reach England and Scandinavia.

Simultaneously, hundreds of migrants from two makeshift camps in Calais underwent evacuation, a hotbed of tension as migrants attempt to reach Britain.

Around 2,300 migrants – mostly from Sudan, Eritrea, Syria – live in the makeshift tent village in Calais, called “the jungle”.

Last week, the European Commission asked member states to admit 20,000 Syrian refugees from outside Europe and another 40,000 asylum seekers from Syria and Eritrea arriving in Italy and Greece.

But many members opposed EU plans to set refugee quotas across the bloc saying it lacked sufficient balance between members.