OWNERSHIP OF MAY 24 celebrations

For the last two decades, the opposition members have been ‘hiding’ while May 24 was being celebrated by the PFDJ members and while the day was being ab(used) to send a distorted information from the 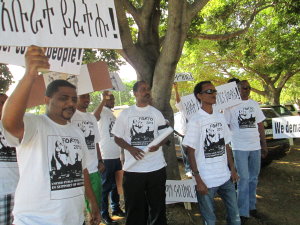 For the last two decades, the opposition members have been ‘hiding’ while May 24 was being celebrated by the PFDJ members and while the day was being ab(used) to send a distorted information from the diaspora. The Eritrean media were busy telling the innocent Eritreans that the diaspora are all on the side of the PFDJ by showing videos taken on the celebrations of this historic day all over the world. However, over the years the balance of power have been greatly shifting towards the opposition and the climax of this is none other than 21 January 2013, affectionately  known us “Forto – 2013”. Now, the big question is, are we going to continue folding our arms in the celebrations of 24 May 1991 while we are the ones who are fighting fiercely to make sure that the dreams of OUR MARTYRS are achieved beyond doubt.

When the members of the Eritrean Movement for Democracy and Human Rights (EMDHR) were busy in a well-organized and colourful demonstration on 18 February 2013, they were astonished to see that the tables had turned on who must dance in the ‘post-independent’ Eritrea. Since the members of EMDHR were conducting a legal demonstration, they had a better chance to dance in front of an envious PFDJ members and by the way the tune was great….”ati Erey kuhulo amsara bidemhit tihlo lomizemen hadiu alo….”. The members of the PFDJ were confined in the premises of the embassy of the Eritrean embassy to South Africa and they were looking like wild-animals who were in a cage, the only difference was they had some slogans designed to distort the aim of the demonstration. This phenomena was very significant both at literal and symbolic level.

Literally speaking, the fact that the EMDHR members (who are gladly in the opposition camp) were dancing freely in the open area while the PFDJ members were passively watching from their “concentration-camp” – the premises of the embassy, implies that after Forto 21 January 2013, anyone who is in the opposition has more reason to dance than the PFDJ members, if they have any reason to dance at all. At symbolic level, this incident means that the PFDJ members are currently confined in their conscience because they are supporting a regime who is the root cause of; among millions of other things, “the Sinai – tragedy” whereas those who are openly opposing the regime in power are walking tall wherever they are because they know they are RIGHT AND are doing all their best in the struggle for freedom and democracy.

Traditionally, it has been common to see the PFDJ members taking ownership of our flag and the MAY 24 celebrations. We have to come to our senses and start believing firmly that neither the flag nor the Mat 24 celebrations are owned by the dictatorial regime in Eritrea. It made us and our lovers proud when we conducted our “Pretoria-demonstration” by waving the Eritrean flag.  In order to keep the momentum of  “Forto 2013” going, the EMDHR strongly believes that we must now be ready to celebrate colourful 22nd independence day and we hope all peace and democracy lovers in the diaspora are thinking on the same wave length.

Usually, the Eritrean people are used to listening non-sense ‘independence day’ messages by the sole driver of the dictatorial regime in the country, it is time we must reverse the situation. On this significant day, the opposition parties and human-rights organizations must reflect on their journey and reaffirm their commitment to intensify their struggle against dictatorship.  In the past, some fanatic “dictatorship-lovers” were seen “dressing the flag” from head to toe and those scenes were forcing us to be spectators in our own game but thanks to Forto 2013, not anymore. Afterall, the fact that the Eritrean land (not the Eritrean people) are free is indisputable.

However, this does not mean that we must be part of the celebration by the embassies because it goes without saying that anyone who is seen dancing in the “embassy-sponsored” celebration will be labelled as if he/she loves dictatorship in its entirety.  Those of us who love democracy must work hard to organize a May 24 Celebration in a place of our choice and as it has been alluded to in the above mentioned paragraphs, during this historic event, the participants must be reminded that we are celebrating the “freedom of our land” as well as the continuous struggle for democracy. What we need is not a “one-hour” rhetoric on what the country has ‘achieved’ since independence, we must organize a short speech where we reiterate that the struggle for democracy has been hijacked by the PFDJ and consequently we Eritreans are being victims of barbaric atrocities both within our country and in our way to places of ‘safety’.  There is no way those who fled from their country and those who are solely responsible for the “exodus” can assemble in the same venue and dance to the same songs for ethical, political and historical reasons. So, compatriots let’s own and move to organize our country’s Independence Day!