Oregon senior Tanguy Pepiot learned a hard lesson in the final few strides of a 3000m steeplechase Saturday. Pepiot had what he thought was an insurmountable lead with the finish in sight. So he began waving 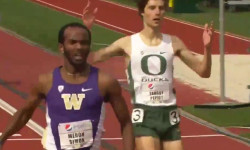 Pepiot had what he thought was an insurmountable lead with the finish in sight. So he began waving to pump up the home crowd at Oregon’s Hayward Field.

Little did Pepiot know the fans meant to alarm him to Washington junior Meron Simon, who was unleashing a furious kick.

“I heard some noise,” Pepiot said, according to the Eugene Register-Guard. “I was very surprised. Then I checked the screen, and I was like, ‘Whoa, somebody’s coming!’”

Simon passed Pepiot to his right and beat him to the finish by one tenth of a second (video here).

“I thought he had me,” Simon said, according to the newspaper. “I thought he was just so far ahead. Then I heard the crowd get crazy, and he started throwing his hands up.

“I was like, ‘I don’t think he knows I’m coming.’ I just went to the line and just raced.”

The finish conjures memories from May, when a cyclist at the Tour of California and Olympic 1500m champion Taoufik Makhloufi prematurely celebrated and lost races on back-to-back days.

Watch video of those final few seconds that has gone viral since.