Google Translation Norwegian citizen of Eritrean origin is being investigated for possible violations of the arms embargo The reason for the investigation is that military vehicles, purchased from the Norwegian Armed Forces, to have been smuggled into 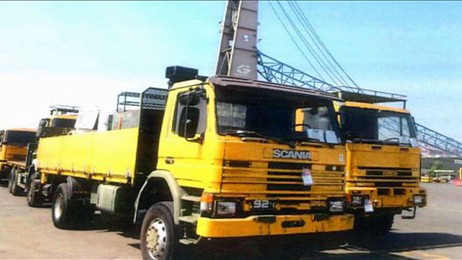 The reason for the investigation is that military vehicles, purchased from the Norwegian Armed Forces, to have been smuggled into Eritrea.

The case was rolled up by the investigators from the UN in October last year made ​​interesting discoveries along the quayside Jebel Ali, next to Dubai in the United Arab Emirates in October 2012.

Investigators took photos of a total of 17 trucks. These 17 trucks originally belonged to the Armed Forces in Norway, and was then painted in military colors like green and white. On the waterfront at Jebel Ali was the cars painted the yellow colors. UN investigators believe it was done to conceal the military origins.

In the window of one of the trucks was also that they had been sent out of Norway from Drammen.

Line Nyvoll Nygaard (Photo: Åserud, Lise / NTB Scanpix)
Line Nyvoll Nygaard, police attorney in PST, says the reason for the investigation is a review from UD.
Photo: Åserud, Lise / NTB Scanpix
Investigated by PST
UN Committee of Experts on Somalia and Eritrea believes in a report from July this year that they can document that the aim of the Norwegian military trucks were not Dubai, but Eritrea.

This is a country that is prohibited to export military equipment to. The UN believes a Norwegian citizen with, who is originally from Eritrea, is behind it all.

The man is now under investigation by the Police Security Service (PST).

– What I can say now is that we are familiar with the UN report. We also received a review from the Norwegian Ministry of Foreign Affairs. Based on the information in the review, we have decided to initiate an investigation, says Line Nyvoll Nygaard, police lawyer PST to NRK.