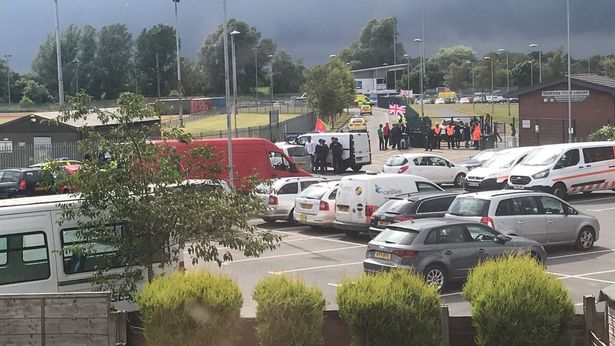 Children were among 12 people hurt when up to 30 protesters stormed an event held in Ashton to celebrate cycling in an African country.

About 60 people attended the first Eritrean Cycle Festival which was held at the Curzon Ashton football stadium complex on Saturday afternoon, with ex-pat former professional cyclists from the east-African country and fans coming from all over England and northern Europe.

But a band of up to 30 male protesters, also believed to have Eritrean connections, stormed the event and are said to have attacked people and thrown beer bottles and kegs, believing the event was connected to the government of Eritrea.

Organisers insist the festival which was using the Tameside Cycle Circuit – which has had to be cancelled – had nothing to do with the country’s Government.

Police were called and made a number of arrests.

Paramedics treated 12 people at the scene including some children. One woman believed to have suffered a cut was taken to Tameside District General Hospital.

Abel Goitom, 38, who travelled up from London for the event and who had helped organisers, described how a band of up to 30 men stormed the event.

He told the M.E.N: “They were outside protesting and then they came in, throwing things and throwing bottles and food. They were against the government but this has nothing to do with the government. They started breaking things. It was mad.

We told them this was a cycling festival. People had to defend themselves. They tried to break a window but it was too strong.”

He said the festival goers were left angry and upset.

He said he believed the protesters targeted the festival after seeing promotional material about the event which featured the flag of Eritrea.

Another witness said: “There were about 15 or 16 police cars, eight ambulances and two or three riot vans.

“We heard one police officer say it had come through as a riot call. We just drove in but then we couldn’t get out.

“I saw quite a few people getting arrested. They were bringing people out in handcuffs. I saw a taxi driver with a bloody nose.

“It’s the first time anything like this has happened here.

“There’s usually football events but nothing like this ever happens, it’s usually quite quiet.”

A spokeswoman for Greater Manchester Police said: “At around 3.15pm today (Saturday 16 June 2018) police received reports of a large disorder at Tameside Stadium.

“Officers attended and a number of people were arrested at the scene.

“Several people are believed to be injured.

“Officers are currently working to understand the circumstances and enquiries are ongoing.”