Moving Forward According to Plan, Says The Eritrean National Council

Michael Abraha While PFDJ’s officials and supporters continued their squabbles over whether or not their former colleague, the late Naizghi Kiflu, should be buried in his homeland, pro-democracy Eritreans were debating how to save the country 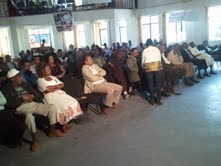 While PFDJ’s officials and supporters continued their squabbles over whether or not their former colleague, the late Naizghi Kiflu, should be buried in his homeland, pro-democracy Eritreans were debating how to save the country from insanity and misery at a gathering over the weekend in Addis Ababa. Opening the conference on March 10 in commemoration of the World Women’s Day, Yohannes Asmelash, Vice Chairman of the Eritrean National Council spoke of the grave dangers facing Eritrea and the need for urgent action, adding that his broad-based coalition was growing stronger and moving forward as planned.

Tigisti Berhane, Head of Women’s Affairs within the Council addressed the gathering attended by Eritrean activists, political leaders, students, professionals and refugees. Tigisti denounced “the exploitation and alienation of women under the backward PFDJ system.” She said Eritrean women would never be free unless fundamental human and democratic rights were first guaranteed for all Eritreans. Tigisti commended the minimization of political and ideological differences among compatriots and the gradual coming together of the various opposition forces to form the National Council for Democratic Change.

The regime’s crimes are too many, said Tigisti. “These include the destruction of our youth by initiating unjust wars, the shoot-to-kill policy against citizens trying to get out of the country and the raping of young women by officials.”

She said the National Council was however not a platform for grieving our hurts and losses but one that unites and emboldens us to carry out an effective campaign to transform Eritrea.

The Council’s Vice Chairman Yohannes Asmelash, on his part, discussed the objectives and goals of the Council for Democratic Change in the social, economic, political and diplomatic fields. He placed special emphasis on the role of the young generation in bringing about democratic change. Eritrea’s independence was realized because of immense sacrifices of our youth, said Yohannes; no democratic change is possible at the present time without their full participation. He deplored PFDJ’s agenda of depriving the young of political and democratic awareness by consigning their role to military service only to promote chauvinistic, narrow nationalism. It is time for the youth to stop criticizing the slow pace of the opposition camp and instead take full charge in enforcing human rights and democratic ideals in the country. Yohannes stressed that fleeing the country and becoming a refugee was not a solution to the tragedy faced by the youth; a solution will only come when the young are ready to remove the oppressive system and build their country’s future themselves and thereby become masters of their own destiny. The Eritrean youth have choices of what group they want to be part of in fighting Eritrean tyranny, underscored Yohannes, but he encouraged them to be involved as part of the Eritrean National Council which he said was all-encompassing.

Answering questions from the floor on why the Eritrean Democratic Alliance (EDA) has continued to exist, Council Vice Chairman Yohannes said “It was up to EDA to decide their own future. EDA’s existence has not interfered with the work of the Council. What is important for us at the moment is to continue expanding our programs in accordance with the principles and objectives stipulated in the Council’s Charter and Road Map. We are consolidating our political, organizational and public outreach tasks; we are building our media task force while also enhancing our diplomatic activities and engaging in many other areas of endeavor.”

On reports of some under-age pregnancies and other social issues in refugee camps, Tigisti Berhane indicated that a lot of work was yet to be accomplished on the part of the National Council and she hoped charitable organizations would be involved to deal with specific health and other related problems.

Asked why wealthy Eritreans residing in Ethiopia were not taking part in the process, Yohannes said this seemed to be caused by uncertainties about Eritrea’s political future; but he urged all citizens to take part in the fight for justice and freedom as a sure means to a stable future.