Mehret Iyob In Memoriam   By Bereket Habte Selassie   I heard the shocking news of Mehret’s death and remained in stunned disbelief for the following few days. A mutual American friend, who was a close family friend, broke the news 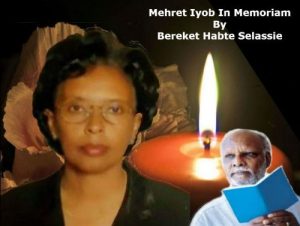 I heard the shocking news of Mehret’s death and remained in stunned disbelief for the following few days. A mutual American friend, who was a close family friend, broke the news to me. Our mutual friend was herself distressed and in tears; and in between the sobbing, she also told me that Mehret had committed suicide.

My purpose here is not to indulge in speculations about the cause of Mehret’s death but to offer my condolences to Mehret’s family and friends. Indeed, if this had been a normal situation and if I were in Asmara, I would have been one of the many of Mehret’s friends and admirers to eulogize her at the funeral. I do so now from an exiled distance, paying tribute to an outstanding person with sorrow in my heart. Mehret was a wonderful human being—a dedicated freedom fighter, beloved teacher of many grateful young tegadelti whom she taught and mentored, and a devoted wife and mother. One of those students who was a teenager when she taught him in Sahel and now an outstanding writer and journalist has written a moving eulogy in Tigrigna at Assenna.com.

The Loss of Our Collective Dignity

I wonder how many of Mehret’s fellow tegadelti stepped up to stretch a hand of friendship to hug her and say: “AjoKi!” when in November 2001 her husband and father of her small children was snatched from his bed and disappeared into the darkness of PFDJ’s dungeon, never to be seen or heard of again? Her daughter Hannah was seven years old and Semere,* her son, was five years old at the time. Imagine the gaping void left in the lives of these unfortunate children with the disappearance of their father.

I wonder how many showed compassion for these kids and made efforts to help fill in the void? In a nation with many of its people grieving the loss of their loved ones –hundreds among them devoured by the desert or the sea—and thousands wasting in prisons, it is hard to find compassion reserved for the likes of Hannah and Semere to help them cope with their grievous loss. But at least I would expect people to pray for them and wish their mother well, even in a nation whose sense of empathy and human sensibilities have been coarsened by the cruelties of a dictatorial regime.

That is why I applaud those who have offered kind words in the wake of Mehret’s death. God bless them, and God bless especially you Amanuel Eyasu; for your eloquent tribute to Mehret, you reaffirmed the collective dignity of your fellow Eritreans. Many had indeed lost that precious dignity in their manner of response—or lack of it—to the tragic loss of one of their honorable citizens that had suffered the worst fate. In the context of a tragic happening like Mehret’s death, our tradition and culture of decency demands caution and delicacy in dealing with the matter. Sensitivity to the feelings of the family and close friends of the deceased is an imperative. While it is tempting to politicize such event and exploit it to partisan ends, decency requires a sensible and delicate handling of the matter, resisting temptations motivated by partisan political ends.

One needs to let a decent interval before inquiring even on the details of the circumstances and manner of death. We need to guard against the danger of losing our collective dignity defined and preserved by tradition and culture. Has everyone paid heed to such decency and collective dignity? I leave the answer to the conscience of all concerned.

A Gentle Woman with Quiet Brightness

My first encounter with Mehret was a casual one at the EPLF School in Sahel, during my brief visit in the late nineteen-eighties. She struck me as a gentle and bright person eager to learn and curious about the world outside especially in matters educational. [I learned later that, following liberation, she managed to obtain a Master’s degree in Education from Birmingham University, England]. She had a quiet diffidence even when she asked questions that showed an inquisitive mind. I thus met her briefly as a tegadalit and then came to know her more closely as a co-worker in the Constitutional Commission of Eritrea to which she was appointed as a member.

In March 1994 when I convened the first plenary meeting of the Commission’s General Assembly, we met frequently. In fact I appointed her to act as secretary of the Executive Committee of the Commission. She was meticulous in writing and keeping the record of the Executive Committee.  Until that time I did not know that she and Beraki Gebreselassie were a married couple. I knew Beraki much earlier, beginning from January 1975, when I joined the Front [then known as Hizbawi Hailtat). I remember him working as “political commissar” in Ibrahim Afa’s Haili, the smallest military unit at the time, a few years before the EPLF expanded greatly and created battalions, brigades and Divisions.

As I began to meet with Mehret and Beraki, I learned more about Mehret’s background, including the fact that she was the daughter of Iyob Teklu, one of the few luminaries among the small elite of Eritrean intellectuals. I met Iyob Teklu a couple of times at the Officers’ Club in Asmara and found him very much interested in world affairs as well as literature. I also knew that he acted as the Secretary of the National Assembly (Semblea as it was popularly known).  In one public meeting that we convened at what used to be the venue of the former National Assembly, Mehret was assisting me keeping the minutes of that meeting. She was sitting by my side, and I informed the audience that Mehret Iyob is performing a similar task as the one done by her father, the late Iyob Teklu, as Secretary of the National Assembly. This statement, which surprised most people, was greeted with a warm and prolonged applause.

When I got to know Beraki and Mehret more closely as a married couple, I used to tease them, calling them bxot tegadelti to Mehret’s amusement tinged with embarrassment, revealing traditional Eritrean womanly humility even in a tegadalit, a warrior toughened by the exigencies of guerilla warfare and the EPLF’s avowed policy of women’s equal station inculcated by ideological drills. The more she seemed embarrassed, the more my teasing continued. I am known for teasing people that I like and consider family. For instance I used to tease Mehret’s younger sister Professor Ruth Iyob. When Ruth got her Ph.D in political Science, I remember calling her and shouting: “AKrur Tsa’Eda,  Doteressa Welida! As I repeated it two or three times, Ruth exploded into her inimitable laughter. We are not blood relations with the Iyob family. AKrur, an integral part of the Xen’A Degle clan in Akele-Guzai is very far from Adi Nifas Hamasien. But there is something about the Iyob family that has always drawn my empathetic interest, particularly after the untimely death of their father, Iyob Teklu. He was somewhat of a rare kind, well-known and respected among the very few Asmara literati whom I considered an endangered species.

Beraki and Mehret were a lovely and loving couple, and I grew fond of them as a couple and devoted parents as well as individually as exemplary citizens—modest, tireless, loyal and dedicated. Beraki served in different positions in Education and Justice and finally as Minister of Information. In this latter capacity, he made available to the Constitutional Commission all the valuable resources of the Ministry, including the services of the radio and TV as well as the newspapers, all of which covered the activities of the constitution making process throughout the nearly three years period. He did all this beyond the call of duty because he believed in the process and in the promise of the constitution that would be the basic guarantee of a democratic Eritrea respecting the fundamental rights of its population. As it happened Beraki and his comrades were to be tested by cruel fate and, true to their belief, they practiced what they preached to the bitter end—a savage act of incarceration by a cruel regime. Indeed, the regime has held the entire nation captive in defiance of international law and all norms of decency.

Thus Mehret found herself a victim of a cruel fate. As her two children, Hanna and Semere, lived for sixteen years deprived of the warm embrace of their father, it is not hard to imagine the depth of their sorrow and the plight of a mother (also deprived of the care and support of a loving husband) trying hard to provide her children with the missing element of parental love. Mehret’s plight and the cruelty that was her fate, is the stuff of classical tragedy.

On behalf of all those who knew and loved you as a tegadalit and indefatigable worker, I salute you!

May your gentle soul rest in eternal peace.

*.Readers of my book, Wounded Nation, will see a picture of Beraki and one-year old Semere (Page 209)