Joy, Ambivalence or Indifference: The Designation of Asmara as UNESCO World Heritage Site.

How does one feel when his beloved city, Asmara, earns an international recognition?  Quite honestly, ‘Euphoria’ would be an understatement.  Is it not?  If we could gauge the Eritrean sentiment upon hearing the announcement of 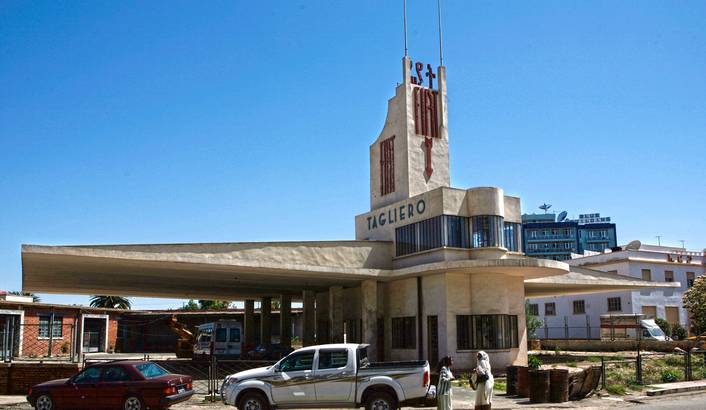 How does one feel when his beloved city, Asmara, earns an international recognition?  Quite honestly, ‘Euphoria’ would be an understatement.  Is it not?  If we could gauge the Eritrean sentiment upon hearing the announcement of the much coveted distinction, certainly, the euphoria gripping Eritreans would have registered on a Richter scale.  Specially to Asmarinos, it is nothing less than jubilation.  And, by Asmarinos, I mean those who grew up in Asmara; it is the same as to say Nairobians, or Parisians – the collective term, the adjective – and not to reinforce the generally assumed meaning, i.e., the phony belief of Asmarino to be socially more advanced than the not so Asmarinos.

Ever since Asmara was accorded the status of a UNESCO world heritage site, I have been mulling, contemplating, pondering and vacillating to pen down my view about the honor.  Because, on the one hand, I felt, quite frankly, I might trigger the ire of some Asmarinos, as the history of Asmara, notwithstanding its beauty, is less than stellar, to say the least; therefore, anything not so romantic about Asmara is blasphemy to Asmarinos.  But on the other hand, history has to be told as it is and not as it ought to be.  Because, as the saying goes, ‘tell the truth and shame the devil’, inconvenient though it may be, If we can’t tell the truth, then we become accomplices to the fiction.

Just to give you an insight into what the real Eritrean society actually is and how detached the Asmarino thinking from the Eritrean society is, consider, for example, the condescending inner thinkings of Ferdinando Martini, the architect of Asmara, when he saw the daily routine of the indigenous when nature calls upon:

“Here is Martini the amused sociologist, fascinated at the goings-on in the stretch of open ground outside his Asmara villa, which serves, he discovers, as a communal latrine. ‘This wretched valley is the debating society for those who feel the need to shed excess body weight…One man comes along and squats.  The effect is contagious.  Another comes along, measures the distance and squats a dozen meters from the first, in the same position with the same aim in mind.  And then a third, a fourth; sometimes a fifth and a sixth.  And the conversation starts…Simultaneous, contemporaneous, in parallel…Words are not the only things to emerge, but they last longer than the rest.’”

Michela Wrong: I Didn’t Do It for You

Does the above quote sound too gross?  Sure it is.  Yet, the inconvenient truths are oftentimes glossed over to propagate the convenient ones.  Behind the facade of the beauty of Asmara lies a sad chapter of Italian transgressions on the indigenous people.  Truth got to be told, Asmara is so beautiful.  The Art Deco buildings: the Gothic cathedral on the main boulevard with its frescos inside, the famous petrol station – FIAT Tagliero – mimicking a jet on a takeoff mode, the cinemas Impero, Odeon and Dante, the Renaissance architecture prevalent throughout its main thoroughfares – Asmara is quite  beautiful.  Anybody who saw Rome couldn’t be more truer to call Asmara Picollo Roma or smaller Roma.  It is, quite frankly, the true copy of Rome; the creation of Italian ingenuity and engineering prowess.  Asmara was even immortalized in the famous Younus Ibrahim music:

I didn’t even have a clue about the meaning of Londra.  Courtesy of one Asmarino – but now, I mean to say a well versed one – Londra is the Italian word for London infused into Tigrigna.

The melody is sinking into your psyche, even to this day. This is what it says:

The city of Asmara

What an enlightened era is yours

Your architecture and buildings are beautiful

Or, perhaps the liberation era music:

And another fascinating melody from the freedom fighters, which says a lot about the utter abandonment and nostalgia of Asmara. It says like this:

Today we invision you from afar

Tomorrow we will be with you

A lot has been sung about the city.  The mania about Asmara – a city built for the exclusive use of Italians and Italians only – is never ending.  Nevertheless, the longing and attachment to the city of Asmara had to happen at a cost to the local indigenous people.  Surely, Italy needed a colony to occupy, a people to subjugate and exterminate and a place of its own among the giants of the time, Britain and France.  Remember, this is the time of Otto von Bismarck, the 1884, the ominous Berlin Conference, the time of the scramble for Africa; where the colonialists sliced the continent like a wedding cake and the giants took the lions share of it, whereas Italy, dwarfed by the big, ended up with the arid and unproductive places of the continent.

Thus, the wheels of oppression and subjugation had started rolling in Eritrea.  A large number of Italians migrated to their newest colony, dispossessing the indigenous in the process.  Martini himself had no qualms about this.  Other powers were doing it [subjugation] he reasoned, so as not to be outdone, Italy had to do it too.  He was so forthright.

“One race must replace another, it’s that or nothing…The native is a hindrance; whether we like it or not, we will have to hunt him down and encourage him to disappear…”

Michela Wrong: I Didn’t Do It for You

Such was the evil intentions of a man who had the extermination of the indigenous in mind.  What a paradox then that our people are facing extermination for the second time in our history; but this time, even more dangerous than the first.  However, without a doubt, this too, shall pass into the dirty confines of history.

So was Asmara built, for the exclusive use of Italians, by none other than Ferdinando Martini: the colonialist, the embodiment of oppression, segregation and subjugation of our people.  According to Michela Wrong, out of the population of 95,000 inhabitants of the city, a mere 47,000 were the indigenous – a minority in their own country – crammed into squalid conditions on the outskirts of the city, prohibited from even entering into the Italian quarters – Campo Cintato.  Even Teclemichael Gebru, the legendary Eritrean singer, memorialized the segregation in his song to mock the racist laws introduced into our society:

‘Kombishtato…’ he started. It is the corrupted term of the Italian, ‘Campo Cintato’

This is what it says:

They forbade me from riding my bicycle in Campo Cintato

The word “Wy” is a wailing tone in Tigrigna; a hapless and defeatist cursing at Mussolini for his apartheid policies in Eritrea.

Had she not been defeated in the Second World War, for all intents and purposes, Italy would have kept its precious and strategically important colony for generations; and, our people would have lived under the first apartheid system in all Africa.  Interestingly, the only apartheid system the whole world had known was in South Africa, introduced when the Nationalist Party came to power in South Africa in 1948.  But way before that, that racist system – apartheid – had been introduced in Eritrea.  It is a pity that other than a passing reference in some history books, there is no mention of apartheid to have ever been practiced in Eritrea.

To the few Asmarino goons however, all the injustices inflicted upon the indigenous is a none issue; or, perhaps as a necessary meting out of punishment on the indigenous for the benefit of acquiring the aura of Italian culture.  Upon the remnants of Italian architecture, beauty and elegance, it is incredibly surreal that the fool can find pride and pleasure.  It goes without saying that once folly starts its journey, it knows no bounds in exposing oneself to buffoonery and ridicule.

Once, strangely enough, I saw a collage of two pictures posted on social media; It is so hilarious.

On the left side of the collage, captioned Asmara 1950, as if they were secret agents on an 007 James Bond movie, two stern looking, yet elegantly dressed Asmarinos, as if on a cue, strolling in tandem, in Campo Cintato; ready for their pictures snapped.

On the right side of it, captioned Europe 2017, happy looking and equally well dressed Europeans, walking casually in some European city.  I doubt they even knew they were pictured.

The suggestion been, Europeans needed almost 70 years to catch up to what Asmarinos had known in the 1950s.  As the saying goes, ”.. so a fool repeats his folly,” the delusional Asmarino, oddly enough, convinced himself that he was far better than anybody in the world.  That is his inner thinking and demeanor.  He convinced himself that he has a Devine right to be the ruler of the not so Asmarino.  Thus, born – in my opinion – the condescending attitude of Asmarinos as superiors over the cheguar danga [people of rural background] in the political hierarchy of the EPLF.

In conclusion, Asmara is indeed beautiful.  If Asmara can be designated a UNESCO world heritage site, it is because Asmara is the true work and ingenuity of Italian engineering.  So, a UN body acknowledging the innovation of a European country and hardly for the work of Eritreans.  I am half-heartedly happy about Asmara’s UNESCO designation, because, Martini left us something to brag about; and above all, the designation would give Eritrea a token of good news in a sea of misfortunes.  Martini must be dancing in his grave.

N.B. Special thanks to Michela Wrong for her insightful book about Eritrea, “I didn’t do it for you”