A migrant boat capsized in the Mediterranean on Thursday and about 100 of its passengers have been rescued while the number of dead is unknown, officials said. It was the second shipwreck in two days as 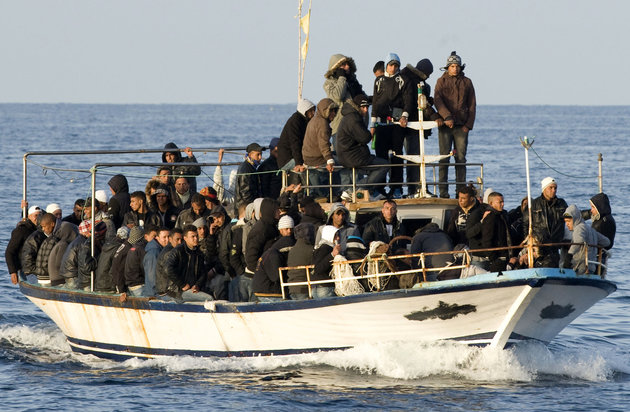 A migrant boat capsized in the Mediterranean on Thursday and about 100 of its passengers have been rescued while the number of dead is unknown, officials said.

It was the second shipwreck in two days as sea crossings accelerate amid good weather. Five people were confirmed to have died when a large fishing boat flipped over in the sea on Wednesday.

Europe’s worst immigration crisis since World War Two has led to more than 8,000 deaths in 2-1/2 years, the International Organization for Migration estimates.

Boat arrivals in Italy have risen sharply this week amid warm weather and calm seas, and about 20 rescue operations are currently under way, a coastguard spokesman said.

Based on initial pictures from the aircraft that spotted the overturned boat, between 20 and 30 people are feared to have died in the shipwreck, a spokesman for European Union’s Sophia naval mission said.

Italy’s coastguard declined to estimate how many may have died. “We don’t know how many people were on board,” the coastguard spokesman said.

Separately, the non-profit organisation Sea-Watch, which has a rescue ship in the area, said it was about to recover one body from the sea following a shipwreck and that it had picked up 115 migrants from a rubber boat.

“Aboard the boats are many Syrian and Iraqi people,” Sea-Watch said on Facebook, adding that the EU deal to send migrants back to Turkey from Greece is forcing refugees to travel from North Africa to Europe.

Most migrants who come to Italy by boat hail from Africa.

The coastguard has coordinated the rescue of around 900 migrants in seven different operations on Thursday. That brings the total of migrants who have been rescued since Monday to more than 7,000.

Through Tuesday, total sea arrivals in Italy had fallen by 9 percent this year to 37,743, according to the Interior Ministry. The country’s migrant shelters are under pressure to house 115,507 migrants, about twice as many as two years ago.

Some 650 migrants and the five dead bodies picked up by the Italian navy docked at the Sicilian city of Porto Empedocle, where they will receive food and clothing. Officials will try to identify them before sending them to shelters.