Matteo Salvini, who refused to let ship carrying 629 refugees and migrants to dock, says: ‘We have opened a front in Brussels’ Matteo Salvini, Italy’s far-right interior minister, has declared victory after a standoff over the 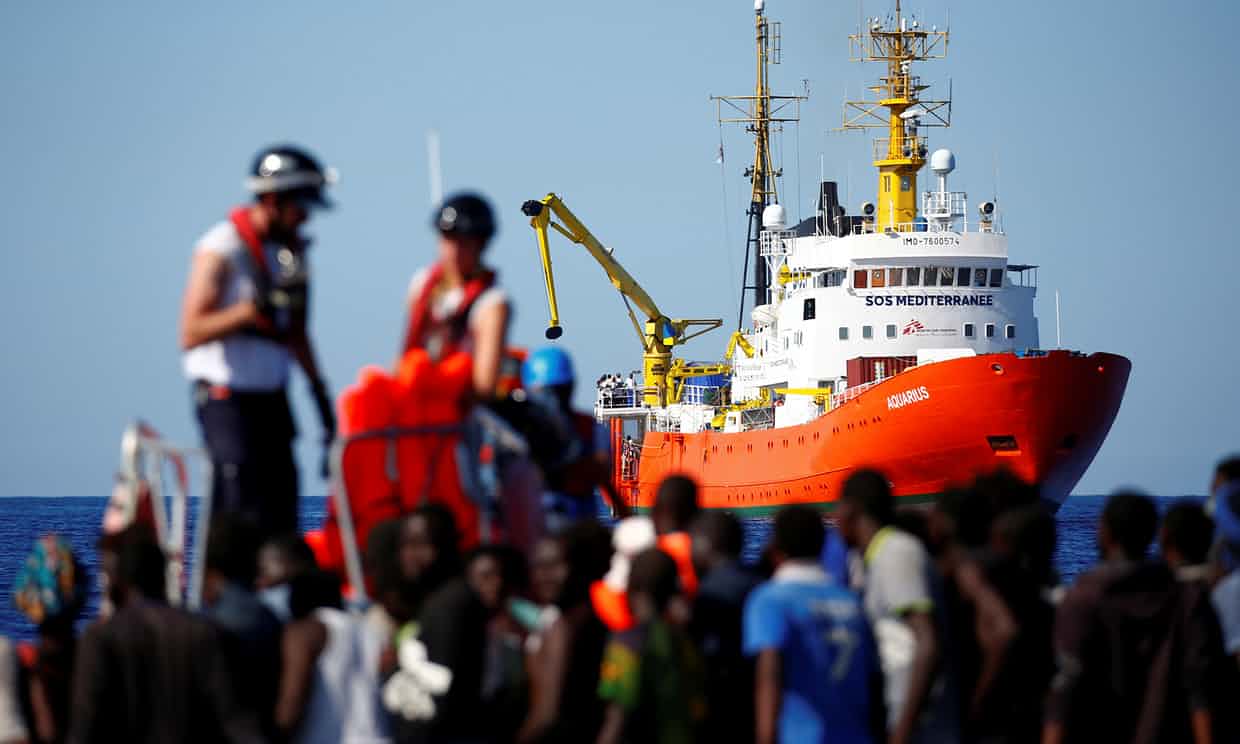 Matteo Salvini, who refused to let ship carrying 629 refugees and migrants to dock, says: ‘We have opened a front in Brussels’

Matteo Salvini, Italy’s far-right interior minister, has declared victory after a standoff over the fate of 629 people on a humanitarian rescue boat prompted Spain to agree to accept them.

The impasse, after the populist and far-right government in Italy refused to allow the MS Aquarius to dock over the weekend, suggested that Europecould face a humanitarian crisis this summer as it comes to grips with the new Italian government’s hardline approach to refugees and migrants.

Salvini blocked the ship from Italian ports and said it should go to Malta instead. Malta refused, saying it had nothing to do with a rescue mission overseen by the Italian coastguard in waters off Libya.

“We have opened a front in Brussels,” said Salvini, who became interior minister last week. “We are contacting the European commission so that it can fulfil its duties towards Italy that have never been respected.”

With the UN refugee agency, the UNHCR, urging the urgent disembarkation of all 629 people on board, including 100 children, as provisions ran out, Pedro Sánchez, Spain’s new prime minister, gave permission for the MS Aquarius to dock in Valencia. He said his country would welcome those on board.

Rome’s new position did not mean every ship would be denied entry. The Italian coastguard vessel the Ubaldo Diciotti, with 937 migrants on board – and two of whom have died, was heading to the port of Catania on Monday evening, signalling that ports are still open to Italy’s own rescue boats. They are expected to be closed to all NGOs, however.

While it appeared on Monday that an immediate crisis had been averted by Spain, Salvini’s response, and a statement indicating he would block more ships carrying refugees and migrants, promised that there would be more of such confrontations in the future.

The new Italian approach by the ruling coalition of Salvini’s far-right League and the populist Five Star Movement followed an election campaign this year in which Salvini vowed to adopt tough polices on migrants.

The standoff over the Aquarius marks the first time thathis rhetoric has translated into action as interior minister, a role in which he will have oversight of migration and domestic security.

It has also left the NGOs on the frontlines of rescuing migrants at sea – and who sometimes have faced direct confrontations with Libyan coastguard officials seeking to take the migrants back to Libya – in uncertain territory about what comes next.

“’We don’t know if Italy will continue blocking us, we don’t know if they will close again the seaports. What we know is that we will continue coordinating the rescue operation with [rescue officials],” said Mathilde Auvillain of SOS Méditerranée, which operates the Aquarius.”

She added: “We’ll wait for the instructions as we always did. If it is not Italy it will be another country. As I said, our rescue operation will continue, regardless.”

There were also questions about how long it would take the Aquarius to make it to Valencia, and whether the political and diplomatic fracas had put some of tose on board in harm’s way.

“People are in distress, are running out of provisions and need help quickly. Broader issues such as who has responsibility and how these responsibilities can best be shared between states should be looked at later,” said Vincent Cochetel, the UNHCR’s special envoy for the central Mediterranean, before Spain made its offer.

More than 600,000 people have reached Italy by boat from Africa in the past five years, and it is estimated as many as 500,000 are still in the country. Salvini’s League, formerly the Northern League, campaigned in the last election on an anti-immigration platform, even though the previous government had overseen a big drop in the numbers coming from Libya over the past 12 months.

The European commission, anxious to avoid feeding the new Italian government’s anti-EU narrative, had earlier called on Italy and Malta to consider the humanitarian needs of those on board.

“France pushes people back at the border, Spain defends its frontier with weapons. From today, Italy will also start to say no to human trafficking, no to the business of illegal immigration,” said Salvini said on Sunday, adding that Malta “takes in nobody”.

The Maltese government rejected a request to take in the boat, saying international law required that the refugees and migrants be taken to Italian ports.

Malta’s prime minister, Joseph Muscat, thanked Spain on Twitter for taking in the Aquarius “after Italy broke international rules and caused a standoff”. He said his country would be “sending fresh supplies to the vessel. We will have to sit down and discuss how to prevent this from happening again. This is a European issue.”

Fulvio Vassallo, an expert on asylum and international law from the University of Palermo, said the episode “could be the end of humanitarian rescue operations at sea. Salvini won and his victory will have a serious impact in the migrant crisis,.”

Italy’s new approach was met with resistance by the Vatican and mayors across the south of Italy, including by Palermo’s Leoluca Orlando, who had said he was ready to open the city’s seaport to the ship.

“Palermo in ancient Greek meant ‘complete port’. We have always welcomed rescue boats and vessels who saved lives at sea. We will not stop now,” he said. “Salvini is violating international law. He has once again shown that we are under an extreme far-right government.’’

Other mayors in southern Italy, including those in Naples, Messina and Reggio Calabria, also said they were ready to disobey Salvini’s order and allow the Aquarius to dock in their seaports.

SOS Méditerranée said the people on board, mainly from sub-Saharan Africa, were picked up in six different rescue operations off the coast of Libya and included hundreds plucked from the sea by Italian naval units.

Although Sánchez’s offer was swiftly praised at home and abroad, the UNHCR has warned that Spain lacks the resources and infrastructure to cope with the migration crisis.