IT IS TIME TO BREAK THE SILENCE : Memorandum Handed Over to the Speaker of the National Assembly of South Africa

MEMORANDUM HANDED OVER TO: Mr. Max Vuyesle Sisulu, Speaker of the National Assembly of South Africa Mrs. Maite Emily Nkoana-Mashabane, Minister of International Relations and Cooperation  18 FEBRUARY 2013  IT IS TIME TO BREAK THE SILENCE  In our country, Eritrea 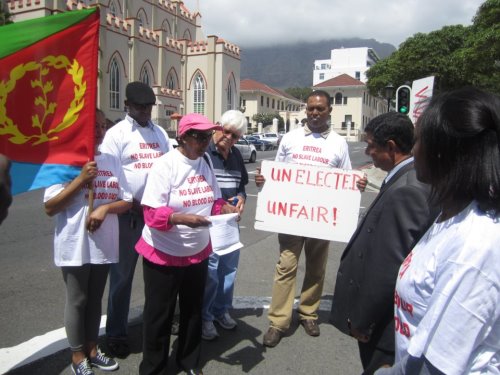 MEMORANDUM HANDED OVER TO:

IT IS TIME TO BREAK THE SILENCE

In our country, Eritrea things are going from bad to worse.

THIS IS AN APPEAL TO ALL WHO KNOW THE IMPORTANCE

OF INTERNATIONAL SUPPORT AND SOLIDARITY

Half of all born Eritreans now live in exile! As Eritreans in South Africa and elsewhere  scattered in the world, we appeal to the world community to assist us in returning our country to the family of nations that live by democracy enshrined in a constitution, the rule of law and a Bill of Rights that is upheld by elected rulers who accept debate and believe in the importance of a free press.

Our country today is little more than a giant prison run by a dictatorship, where education has been replaced with compulsory military service for any child over the age of 18 up to 40 for indefinite period, and is being used as slave labour.

Persecution and oppression leaves untold numbers of our compatriots in detention centres and jails, without ever having faced charges or the representation of a defence. Untold more are killed if they do not submit to the arbitrary rulers.

As if internal oppression is not enough, we want the world today to stand up about an even bigger crime that is committed against a people the world knows so little about. Many of our compatriots are made to flee their country and fall into the arms of human traffickers who seek ransom money from their families back in Eritrea, failing which they are killed and their body parts sold in a highly sophisticated operation. Through manipulation and through ignorance these refugees are lured into the Sinai desert where Bedouin gangs demand ransom money from parents or relations, via mobile phone. If they cannot raise the money and thus the right of passage to Israel or Egypt to apply for asylum, they are killed. The Bedouin gangs call on ultra-modern ambulances with trained crews in nearby places who then sell body parts all over the world.

This crime has to be exposed and it has to be stopped! We demand an end to the conspiracy of silence by those who fail to ask questions; questions about the origin of the body parts that get sold internationally.

People of South Africa: You know oppression, you know injustice, and you know how human rights were violated in your country. You may not stand bye while fellow Africans suffer in this way. BIG COMPANIES ARE NOW ENTERING ERITREA TO MINE FOR GOLD. This is morally reprehensible! The plight of the people of Eritrea cannot be shifted aside in order that SA companies make money there. To enter Eritrea now will condemn you to be entering a country in which extreme exploitation of people is possible because of the dictatorship that rule in Eritrea.

If, you, Mr. Speaker and Madam Minister of International Relations and Co-operation, and mining companies are not appraised of what is going on in our country, we urge you to  listen to us and to listen to what the United Nations  and the Human Rights Commission says.