Irresponsible leader hatched several armed groups against Ethiopia yet praised as a peacemaker : Poor Ethiopia Today many Ethiopians are excited with the coming of Dr. Aby, as well as with the fast democratic processes and the 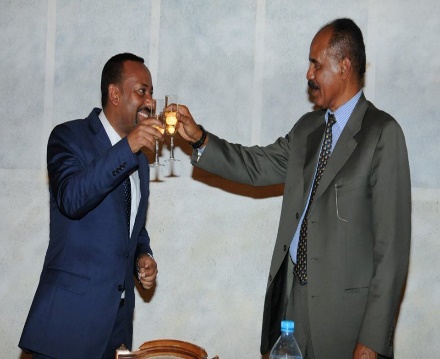 Today many Ethiopians are excited with the coming of Dr. Aby, as well as with the fast democratic processes and the return of many peace activists from various ethnic groups. It is a season everyone envy to be a witness and during this high emotional period, it is easy to under look the destructive role of Isayas Afewerki in Ethiopia current situation.

The irony is, the evil messenger is regarded as the centre of the peace making in Ethiopia, the jealous new PM and his poor Ethiopia are deluded with the new hope of MIDMAR from the president. There is no wrong for the new Ethiopian government to make peace with the current ruling in Eritrea for the benefit of his country and his people; though there is little hope the president has any DNA left in his body to accommodate this new era, and the trust his keenness for peace and unity of Ethiopia.

Isayas’ dramatic sympathy for Ethiopians during his visit accompanied by his physical and emotional expressions, these active expressions were never seen in his entire life.  This act of fake compassion however, won the hearts of many poor and humble Ethiopians, as a person who sacrificed to unite Ethiopia and a person who paid huge price for the stability of Ethiopia.

This high time with patriotism exhibitions everywhere in Ethiopia, is not easy for journalist or writers to be critic of Isayas A. Hence, no single journalist dare to read or write the concern of Eritreans or the untrustworthiness of Isayas A. It looks there is no interest from Ethiopian side to write any article critic of President Isayas A. and looks no room for those types of articles in Ethiopian media. Be midfull Ethiopians, this person sucked all things we (Eritreans) had and we are drained to the extent we cannot lift our heads.

Isayas A. the messenger of evil sorry peace for Ethiopia hatched several opposition groups and hosted them for years in this tiny economically weak country Eritrea. He financed them by starving its people. Some of the groups who armed against Ethiopia are; Demhit, Patriotic Ginbot 7, Oromo Libration Front (OLF), Benshangul , Ogaden National Liberation Front (ONLF) etc., among these several of them were harboured in Eritrea.

Unless our vision is blurred and are blindfolded like most Ethiopian media outlets and some selfish activists, how can one miss the character of Isayas A. who hatched like chicks every time new armed groups. How a healthy leader of a country can, harbours so many armed groups against its neighbour. This is not normal unless the government is a terrorist government or a terrorist state.

The question need to be asked is who founded them, who was financing them, a person of  sound understanding can easily figure out the extent of damage and the sacrifices the people of Eritrea, endured when the dictator forgot the country to actively coordinate this evil works. He exploited the naiveness of the Eritrean people for his own greedy power thirsty agendas.

There is a saying “instead of covering your private parts you end up exposing them”, Isayas A. trying to look good and important peacemaker in front of many humble Ethiopians. However, he himself exposed to the international communities and UN, the extent of his destructive roles in East Africa, by actively arming various armed groups.

Isayas A. is still denying his involvement in the armed groups that ruined Somalia and is begging for lifting the UN sanction imposed on him. Yet he is openly claiming the reward for creating, harbouring and arming several Ethiopian armed groups against the Ethiopia government.

The Ethiopia PM is actively campaigning for removal of the UN sanction imposed on Isayas A. by the UN security council, though his recent actions clearly highlighted he harboured many other armed groups in defiance of the UN sanctions. Isayas never stopped arming rebels even he was under UN sanction. It has to be noted that the imposed sanction were not in response to his human rights abuse to the Eritrean people , these sanctions never helped the Eritrean people before and never help in the future either.  However, instead of lifting the sanctions a targeted strict sanction could serve better.

The initiative by the new PM of Ethiopia to invite all rebel groups into his country and solve the internal crises politically instead of shedding blood is an amazing step towards peace, though its method looks flimsy and unguaranteed. One of the issue is the role of Isayas A. in the peace process in Ethiopia, trusting him in the processes of negotiations between different ethnic groups in Ethiopia is buzzling and worrying. If the PM is not wise and careful, Isayas who is expert in crooked tactics for centuries can ruin the PM’s leadership and put Ethiopia in to deep trouble. He does not have any DNA for peace and stability of any people.

If we ask the leaders of these armed groups about Isayas A., they cannot deny he is a good player, and they definitely have concerns when many humble Ethiopians applaud as hero. This method of creating, incubating and hatching many armed groups each time and using them as a bargaining tool for negotiations has worked in Eastern Sudan.  A similar or more advanced method will use when he deal with Ethiopia. In 2016 when Mola the leader of Demhit left Eritrea, Mola accused Isayas of not being an honest peace lover of Ethiopia, rather, a person of far sight to rule and undermine Ethiopians. Many of the fighters of the armed groups are also witnesses, the slavery and barbarism while in Eritrea. If ESAT and other media outlets need the truth, ask the former pilot released recently from Asmara about Isayas A. and his genuineness for peace.

Many have hopes after the coming of Dr. Aby as PM of Ethiopia, however as to the implementation of his plan to his country determines whether he will fulfil what is called for. The PM knows well “ bad friendship ruins reputation”, his teenage like friendship with Isayas A., who was known for his stubbornness in front of God, non-compassion to the misery of his own people, will not result into a long lasting and fruitful outcomes. On the contrary, we fear, he will remotely control the returned rebels’ group to the extent they may remain loyal to him. We are already witnessing this, he was invited to Ethiopia when Dawid Ibsa refrained from disarming his fighters, he is also visiting in Gonder, now when serious conflict looks looming between Amhara and Tigray regional administrations.

Is he a messenger of peace or evil? I leave the decision to every individual who read this article.

However, my sincere advice to Ethiopians is, if the Eritrean people’s experience under Isayas A. does not give you a lesson. You will learn it with hard truth and is too late by then.