Interview with Ahmed Nasser: Michael Abraha Veteran politician Ahmed was Isaias Afewerki’s opposite number during the independence struggle ashead of the Eritrean Liberation Front, ELF. The other movement, Isaias’s Eritrean People’s Liberation Front, was in fact an 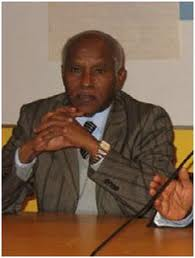 Veteran politician Ahmed was Isaias Afewerki’s opposite number during the independence struggle ashead of the Eritrean Liberation Front, ELF. The other movement, Isaias’s Eritrean People’s Liberation Front, was in fact an offshoot of the ELF. Ahmednow leads the Eritrean National Salvation Front, an important partner in thebroad-based Eritrean National Council, headquartered in Addis Ababa. Michael Abraha met with Ahmed over the weekend in the Ethiopian capital to discuss theworsening Ethiopia-Eritrea relations – first putting to him what he thought wasthe reason for Ethiopia to attack Eritrean military targets at this particulartime?

Ahmed Nasser:  I should stress at the outset that Iwas not privy to any Ethiopian government plans before or after what appears tobe Ethiopia’s limited military operations on the Eritrean side of the border inmid March. I have been following the news like anyone else and I can only guesswhat the objectives might have been. In view of the current state ofdeteriorating relations between the two sides, I can make the followingobservations: 1, the Ethiopian government probably wants to prove to the rulingPFDJ that at any time of their choosing, they can target any suspicious orhostile Eritrean military posts along the border; the aim being, it seems tome, to convince the Eritrean people and the international community in generalof the diminished military position of Isaias Afewerki’s regime.  2, the other motive perhaps is to widen theschism between Isaias on the one side and his generals and advisers on theother. 3dly, to weaken the Isaias regime militarily, politically and morallythrough military maneuvering. This could also result in added social andeconomic burdens on the regime. However, I don’t believe this will lead to fullscale war.

Q:        Some maythink you would have been consulted by Ethiopia as an opposition force.

A:        Absolutelynot. This is an encounter between the two governments. This does not mean itwon’t have political repercussions on the Eritrean opposition. If the Ethiopianaction weakens Isaias’s hand politically, we stand to gain as an opposition asour objective is to see a damaged regime. On the other hand, if the regime isable to get sympathy from any source, it is not helpful. Much depends on theEthiopian handling of the reality created by its recent military actions.

A:        Yes, that ismy thinking. The last war benefited no one. On the Ethiopian side, the declaredemphasis is to eliminate poverty and ignorance and for that they need peace anddevelopment. But they also say they have to always be prepared to act inself-defense if national security and sovereignty are challenged. On theEritrean side, there is no stamina for war because of low army morale as evidencedby the endless defections of soldiers and conscripts because of maltreatment bythe regime and limitless military services without hope. Eritreans in general donot see a legitimate reason for war at a time of severe social and economichardships. Besides, the regime is very weak politically in the region andinternationally. There can be no zeal for war under these circumstances. Awareof these facts, the Eritrean leader keeps stressing in his press interviewsthat there is no room for war.

Q:        Are there anyknown or unknown opposition forces inside Eritrea which Isaias should be afraidof?

A:        In politicsit is difficult to ignore the possibility of the existence of resistance withina regime. However, due to a most suppressive security situation in Eritrea, itis hard to imagine that such phenomenon would readily be surfacing to the open.But I cannot rule out this possibility from materializing on the ground given thecurrent pressures.

Q:        Thecontinuous exodus from Eritrea is thought to show the general indignation againstPFDJ policies. How can the opposition change disenchanted Eritreans into anorganized political force inside the country?

A:        Because ofthe brutal repression, these sentiments will remain underground within smallresistance cells or groups. I know all the exiled opposition groups have theirown channels of communication with forces inside the country in very scattered anduncoordinated fashion. To be effective, we need a strong, united opposition.The Eritrean National Council which represents the overwhelming majority of theresistance movement must prove that it is a viable representative of the oppositioncamp. Such unity will embolden and boost the morale of the resistance forces inthe country, which may one day turn into a Trojan horse. Apart from all this,there is international sympathy for the oppressed Eritrean people that mayhasten the realization of a change.

A:        He is supportedby, one: a merciless security and intelligence machine; two: those elementscollaborating in brutalizing the people; three: by greedy individuals andbusinesses who have amassed too much wealth through corruption; and four: bymisinformed Eritreans and some opportunistic intellectuals.

Q:        What messagewas Isaias transmitting to his ministers and advisers by denying a burial placein Eritrea for his former National Security Chief, Naizghi Kinfu, who passed onover a month ago and his remains are still in London?

A:        Naizghi hadgone to the extreme levels to enforce Isaias’s appalling security measures. Refusalto allow a burial space in his own country, no matter what, is an enigma to me.Naizhi may have left documents revealing criminal scandals only known to himand Isaias.