By Fesseha Nair "Let us hope the year 2017 be the Year of Dialogue for Democratic Development and co-operation between all the peoples of the Horn of Africa in general and the Ethio-Eritrean people in particular." 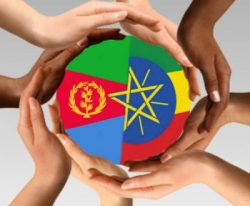 “Let us hope the year 2017 be the Year of Dialogue for Democratic Development and co-operation between all the peoples of the Horn of Africa in general and the Ethio-Eritrean people in particular.”

A Peaceful coexistence in progress based on peace, democracy, human rights respect, the rule of law and good governance. Our region is the origin of humankind and homosapience, from city-state of Mesopotamia to Alexandria and Axum- Afro – Arab communities.It is time to renew the old civilization in agreement with the modern world.

Ethiopia and Eritrea are inhabited by diverse of mosaic identities of people. The people living in today’s Ethiopia and Eritrea lived together from time immemorial under different ruling systems from Axumite kingdom, different local rulers and later after decolonization of Africa under the Emperor Haile Sellasie, later the Military rule of Derg and recently from 1991 Eritrea as separate entity under a totalitarian one man rule and Ethiopia ruled by the federal democratic republic.

As we know historically,  the formation of states from  AD 990-1992 were formed by coercion and militarization. This was not the African legacy but inherited by European supremacist politics. The Ethiopian and Eritrean people, despite all internal and external conflicts,  were mutually respecting and hospitable. During the war between the Eritrean Liberation and Ethiopian ruling system of the emperor Haile Selassie and the Derg Eritreans were fleeing to Ethiopia and were living there in peace and similarly when a border war started (1998-2000) between the government in Eritrea and Ethiopia Eritreans fled to Ethiopia and has received all refugee rights and other opportunities as the Ethiopian citizens.

This shows how much the people of Ethiopia and Eritrea are tolerable towards cultural difference and aware of the importance of living together in peace. It is this culture we want to progress through dialogue between all stakeholders both in Ethiopia and Eritrea. It is time to renew the Ethio- Eritrean partnership in all fields of life in general, and partnership with political mission in particular. The Eritrean political and civic organizations for democratic change were in search of this partnership with the Ethiopian government and people. This partnership can be built by genuine dialogue for deeper discussions on concrete initiatives and procedures to promote the democratic principles on which all agree.

Dialogue is the platform that encourages diversity of thoughts and opinions but not suppressing them. It leads to mutual understanding of problems and opportunities and search for common understanding. In practicing dialogue, there is an agreement that one person’s concepts or beliefs should not take precedence over those of others, and common agreement should not be sought at the cost of the others. We believe dialogue is the main instrument to discuss the opportunities and problems for democratic development, and to develop strategies to address the issues of common interest. A dialogue to be effective must be built on certain principles that serve to guide and structure the discussions.

We , in the Eritrean opposition struggling from dictatorship to democracy need dialogue with Ethiopian government and people to listen each other for a deeper awareness and understanding of what is actually taking place nationally, regionally and globally.

The value of dialogue

Since we are in process of democratization , the impact of political dialogue can generate momentum to reinforce the democratic process and enables to assess the pace of the transition. The value of dialogue is to help us the assess/ evaluate pace of democratic development, enables us to identify of issues of priority. It allows us evaluate the impact of external democracy assistance.

Conflict in itself is not necessarily negative. It is unmanaged conflict, where stakeholders attempt to resolve their disputes through unconstitutional or even violent means, that poses the most complex problems. Democracy is all about managing conflict peacefully. In the Eritrean opposition case, dialogue can also act as a mechanism to help prevent, manage and resolve conflict.

– As a mechanism for the prevention of conflict. By bringing various actors together for structured, critical and constructive discussions on the state of the nation, dialogue can result in consensus on the reforms that are needed to avoid confrontation and conflict.

– As a mechanism for the management of conflict. Dialogue can help put in place democratic institutions and procedures that can structure and set the limits of political conflict. Democratic institutions and procedures provide mechanisms for political consultation and joint action that can peacefully manage  potential conflicts.

– As a mechanism for the resolution of conflict. Political dialogue can defuse potential crises by proposing appropriate peaceful solutions. Democratic institutions and procedures provide a framework to sustain peace settlements and prevent the recurrence of conflict.

What should be the guiding principles for the dialogue

– Disseminating democratic principles in all areas of the cooperation

– Deepening the dialogue at both national and international level

– We in the Eritrean opposition as initiators of the dialogue would like demagnetize to identify the challenges, analysing the participants, evaluating available resources.

– Objectives: Analysing the dynamics of the transition, seeking a national consensus on priorities and searching for effective cooperation

– Assessing results and monitoring the implementation.

Three key functions to be fulfilled in the dialogue for democratic change at the national and regional level.

– Analysis function. By providing a comprehensive analysis of the constraints and opportunities for further democratization, the dialogue contributes to diagnosing the flow of events and experiences at the national and regional level.

– Dialogue function. By providing a platform for change of experiences and lessons learned and a forum for building consensus on the challenges and opportunities for democratic change, the dialogue contributes in itself to the consolidation of democracy. It should ultimately lead articulation a democratic reform agenda with specific policy recommendations primarily defined by the national participants and thus owned by them.

– Brokering function. By providing international institutions and donor agencies involved in and committed to democratization with a reference framework, the dialogue contributes a mechanism to assist the international partners to identify concrete support measures, better target their interventions and co-ordinate their assistance.

The national dialogue for democratic change could be structured around three main groups with specific roles:

Eritrea as a country emerging from conflict need dialogue in itself and dialogue with Ethiopia.