‘In Sinai, I saw hell’: Refugees are easy prey for brutal human traffickers –

By Ashish Kumar Sen The Washington Times Sunday, July 21, 2013 Egypt’s lawless Sinai Peninsula is a living hell for thousands of refugees from sub-Saharan Africa who are being kidnapped and tortured by a network of rapacious human 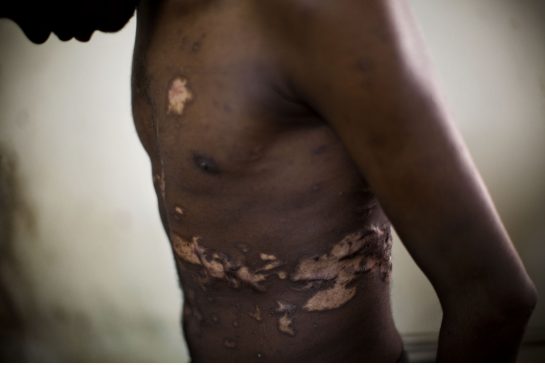 Egypt’s lawless Sinai Peninsula is a living hell for thousands of refugees from sub-Saharan Africa who are being kidnapped and tortured by a network of rapacious human traffickers.

Most of the refugees are Eritrean Christians; others are from Ethiopia and Sudan.

“We have an idea about hell from the Bible,” said Yonas Habte, a 32-year-old Eritrean Pentecostal Christian who was trapped by the traffickers. “In Sinai, I saw hell.”

The traffickers chain together groups of men and women; pour molten plastic on their bodies; deprive them of food, water and sleep; subject them to vicious beatings and electric shocks; and force them to smoke hashish and rape one another, according to survivors interviewed by The Washington Times.

“They forced us to behave like animals,” Mr. Habte said in a phone interview from Cairo, where he was released in May after his sister in Australia paid a $40,000 ransom.

In Eritrea, Mr. Habte was persecuted because of his religion.

“Our church was locked. We couldn’t even pray to our own God,” he said.

In December, he fled to Sudan in search of a better life but became trapped in a vicious network of extortionists.

Sudanese soldiers arrested him and sold him to members of the Rashaida, an Arab tribe, which in turn drove him to the Sinai, where they sold him to Bedouin traffickers.

“Many of the refugees fleeing into Sudan do not get very far before they are taken by the Rashaida,” said John Stauffer, president of the America Team for Displaced Eritreans.

“Eritrean forces turn them over to the Rashaida, or they are sitting prey, kidnapped while walking to the nearest town in Sudan.”

Once in the Sinai, the kidnappers give their captives mobile phones and demand that they call their families to beg for large ransoms.

“These people are tortured while their families are listening on the other end,” said Stockholm-based Meron Estefanos, co-founder of the International Commission on Eritrean Refugees.

Security in the Sinai has worsened since Egyptian President Mohammed Morsi was ousted by the military July 3, after four days of massive protests against the Islamist leader. Bedouins have attacked Egyptian military personnel. Christians, too, have been assaulted.

A 1979 Egyptian-Israeli peace treaty limits the number of Egyptian forces that can be deployed in the Sinai. This month, in an acknowledgment of the grave situation there, Israel permitted the Egyptian army to deploy two more infantry battalions to the peninsula.

The flow of asylum seekers into Israel from the Sinai slowed to a trickle last year after Israel constructed a fence on the border with Egypt to keep out African migrants.

“As the refugee flow to Israel decreased, the Rashaida started to lose money, so they began to kidnap refugees from camps inside Sudan,” Ms. Estefanos said.

“A large proportion of refugees are abducted from the camps,” said Mirjam van Reisen, a professor at Tilburg University in the Netherlands who co-authored a report on human trafficking in the Sinai with Ms. Estefanos.

Girmay Berhane, a 23-year-old Eritrean Christian, was a refugee at the Shagarab camp when he was arrested by local police because he did not have the proper papers. He later was sold to the Rashaida and then to Bedouin traffickers in Egypt.

Mr. Berhane’s captors demanded that each person in his group pay a $50,000 ransom.

“When we told them this is too much money they started to beat us with sticks, metal pipes and chains,” Mr. Berhane said in a phone interview from Cairo, where he arrived two months ago. “They asked if we had family in America or any other Western countries. If we told them we did, they wanted even more money.”

Their captor, a Bedouin named Abu Omar, had four henchmen who were eager to please their boss by carrying out his barbaric orders.

“They did very bad things to us on his orders,” Mr. Habte said.

Many of the migrants are “forced into sexual servitude or forced labor during their captivity in the Sinai,” the State Department said in its annual report on human trafficking. “Reports of physical and sexual abuse continue to increase.”

Even children are not spared.

Ms. van Reisen heard from survivors about a 6-month-old baby who was beaten in an attempt to force its parents to beg for ransom money.

The huge ransoms that the traffickers demand devastate families. Communities in the diaspora, including in the U.S., often pool their resources to collect the money.

As of May, more than 54,000 asylum seekers had migrated to Israel through the Egyptian Sinai border, according to Physicians for Human Rights-Israel.

“It is the responsibility of the Egyptian government to stop the torture in the Sinai, but Israel is also responsible for taking care of the victims,” said Shahar Shoham, a project director with Physicians for Human Rights-Israel.

Israel this week started repatriating Eritreans in a move criticized by rights groups concerned about the safety of these migrants. The Interior Ministry said all such returns are voluntary.

“The situation in Israel is very bad for refugees and asylum seekers,” said a 24-year-old Eritrean Christian who identified himself only as Daniel out of concern for his family’s safety.

Daniel, who was held in the Sinai, was left by his captors at the Israel border a year ago. In Israel, he was held at a detention camp in the Negev Desert for 2 months and then transferred to a government shelter in Petah Tikva, a city about 7 miles east of Tel Aviv.

Israel doesn’t accept them as refugees, he said in a telephone interview from the shelter.

“They call us infiltrators. We face up to three years in detention. This is the reality here in Israel,” he said.

Authorities in Europe, meanwhile, have started to investigate the flow of ransom money from the diaspora communities to the traffickers.

In the first case of its kind in Europe, two Swedish men were convicted last month of extortion after they demanded $33,000 from Ms. Estefanos to secure the release of a hostage held in the Sinai.

One of the men was sentenced to a month in prison and probation, while the other got probation.

The hostage was tortured to death by his captors.

Ashish Kumar Sen is a reporter covering foreign policy and international developments for The Washington Times.
Prior to joining The Times, Mr. Sen worked for publications in Asia and the Middle East. His work has appeared in a number of publications and online news sites including the British Broadcasting Corp., Asia Times Online and Outlook magazine.