In Search of Liberty – 4th Narration

Subject: In Search of Liberty – 4th  Narration, 13 Oct 2018 News Items: a)       Sport: There will be marathon brotherly competition between Tigray and Eritrea, if it is true story. b)      Politics:  Dr. Debretsion Gebremickael  Head of Tigrai Central Administration is invited by President 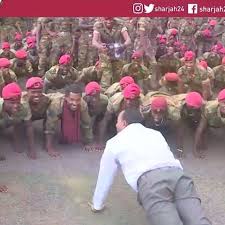 a)       Sport: There will be marathon brotherly competition between Tigray and Eritrea, if it is true story.

b)      Politics:  Dr. Debretsion Gebremickael  Head of Tigrai Central Administration is invited by President Issayas Afewerki for fraternal get together >>>> or, is it a rumour? Or outright false story?

c)       Prime Minster of Ethiopia undertaking push-ups with soldiers who came to express their grievances about salary!!! Regardless of the mysterious motive, who ever heard of an African Leader being a part of the ‘commoners’?

d)      Three Ethiopian Airforce military planes (of Russian origin), with armed military regiment, have landed at Asmara Airport in the middle of a night.

e)      Migration of Eritreans to Ethiopia is increasing by the Day in addition to the migration heading to Europe. The long-term consequence is open and obvious >>> brace yourself ERITREANS!!!!

f)        So many things seem to be percolating in our region – Alas! Fortunately, without WAR.

What is next? Stay tuned for the next episode. Is any thing good happening in Eritrea? It depends on one’s definition of “good” !!! In any case, the stabilization of Eritrea in the good sense of the word will take quite a while.  But let us continue.

Dear Eritreans:  The only task left for us is to occupy our time leisurely in a safe foreign sanctuary, having squandered our opportunities to be GREAT. We are permanently hooked to parochial ‘hidden’ mattes of RELIGION and REGION (i.e. provincialism, tribalism, racism). We never want to accept that REALTY of OUR ERITREA. And it will NEVER go away with the wind.  Eritrea is hinged [anchored] to the two cancerous diseases of RELIGION and REGION.  It is a permanent prison, in which Eritrea seems to be comfortable. But then, there is always the hope of the hopeless >>>MIRACLE.

Just look at the commentary section of our Dear Website, www.archive.assenna.com. Let us be honest to ourselves: how serious are we in utilizing archive.assenna.com for the ultimate liberation of Eritrea? How serious are we to solve our own problems?   Are we really against Issayas Afewerki Abraha? Shocking Question!!!  But, whether we like it or not, Issayas has his loyal followers from both sides of RELGION and REGION.  Mind you, it is NOT that they like Issayas but they are protecting their respective historical ambitions !!!

So, We pretend to have the platform. We have the Time and Knowledge. But what we see are just string of articles and commentaries by multiple commentators, including those who utilize multiple names laced with raw insults to each other — unconsciously proving that we are our own enemies!!!  Psychiatrically, it is a process of transferring our inner self-hatred upon each other — without ever admitting it. It is a process of a perfect DENIAL of the existence of inherent problem.  And so, we are in a bind.  And yet, we know deep down, that unless we FACE and ACCEPT the REALITIES of the two diseases (mentioned above) we will only go on being RUSTED slowly until the molecular structure of RUSTNESS disintegrate us into pieces.

It was only a FEW “YESTERYEARS”  that Eritreans of various professions were working/helping the ‘UNDERDEVELOPED’ Ethiopia of the TIME!!! YES, “SERVING/HELPING” ETHIOPIA in various fields of socioeconomic development. Yes, it is Historical Fact. It is also historical fact that Haile Selassie, self-appointed Emperor, King of Kings from the Tribe of Judah [or whatever] vowed to make Addis Ababa indeed the “New Flower” of Ethiopia. This was done at the DELIBERATE expense of ERITREA.  Eritrea was progressively emaciated from its technological infrastructure [admittedly, achieved as a result of European colonialism], thus forcing Eritrea to the status of backwardness. This was DELIBERATEDLY done by the Government of Haile Selassie.  In normal atmosphere, it would have been labeled as a CRIME; and in theology as an eternal SIN. Be that as it may — and to be fair to history — only one personality i.e.  Aklilu Habtewold, Foreign Minister of Ethiopia, objected STRONGLY to the Ethiopian policy of destabilizing Eritrea from its development. In the absence of heeding his warning, he made a perfect forecast of the consequence and helplessly kept quiet – a reflection of an honest Scholar.  After that, Haile Selassie never involved Aklilu Habtewold in any matter pertaining to Eritrea. As the saying goes, ‘the rest is history’.

Please note, the above is NOT an emotional outburst from a simple Eritrean but HISTORICAL FACT. I have open mind. I stand to be corrected and educated at any time. With that caveat, let us proceed: obviously, as expected, Eritrea regressed backward   Dear Reader, if you are irritated by my constant repetition, I can only beg for your kind forgiveness. I can’t help playing a broken record – as it is the only relic that we ERITREANS are left with. And, the greatest sadness of all, it is due to OUR OWN doing.  We can pile-up excuses, after excuses, and bury our heads therein for infinity, only to have Issayas  — the descendant of Afewerki Abraha Miratch  — to LAUGH at us to his heart’s content.  We worshiped him next to God. Didn’t we?!

Do you remember our historical meeting in 1991 at Los Angeles, California, USA? The ecstasy to see and hear Issayas uttering a few words was delightful phenomenon to us. Every word he uttered was soothing to us. We worshiped ‘HIM’.   At that moment, HE was our God. Wasn’t HE, Dear Eritreans?  Admittedly, HE didn’t design it; though HE recognized the emotionality of Eritreans as a tool; and used it effectively to his heart’s content. Eritrea was HIS domain; and Eritreans were HIS loyal volunteered admirers and servants (1).  And we NOW have REALITY gnawing at us, but still bickering among ourselves because of the age-old RELIGION on the background. If that is not enough to destroy ourselves, we can always latch to the parochial destructive factor to fight each other, for eternity. WE ARE OUR OWN ENEMY – until we prove it otherwise. No amount of blind emotion/insults is going to change THAT REALITY.

Have you noticed? The only time ERITREANS got together, comrade in arms, was only when it had a COMMON ENEMY [perceived or otherwise] until the LEADERS of the Eritrean Liberation Forces were faced with conflict of self-interest — aligned 180-degree out of phase against each other’s insidious interests.  Reality was exposed; and consequentially WAR between the deceivably called ‘brethren’ was unavoidable. The horrendous sacrifice made by ordinary gallant fighters was for ONE cohesive Eritrea — without strings attached to it.   Eritrea, however, seems to be destined NOT to learn from the factual background of the Eritrean society.  As a consequence, Eritrea will always remain as a pony in the international intricate political chess game. To repeat, Eritrea is its own enemy; has always been so; and will probably remain so, for a long time to come. Needless to say, as an Eritrean, I would love to be wrong.

Suggestion for Action in a question form

Would it be possible to form ONE WORKING GROUP (2) of not less than eighteen (18) members of Highest Calibre, and deeply knowledgeable persons of Eritrean History, to formulate a PLAN of ACTION to Liberate Eritrea from its self-appointed Dictator and initiate a temporary Government?

If the answer of possibility and probability of galvanizing Eritreans for the intended ACTION is negative, it goes without saying, there is no hope for Eritrea. Hence, the initiative of the Prime Minster of Ethiopia, which is gleefully accepted by issayas Afewerki Abraha, will be the frame work for future Eritrea. And we know, very well, where it is heading.

On the other hand, if Eritreans indicate a desire, commensurate with the 30-year sacrifice, the above proposed TASK requires top notch scholars with international experience as well as those (Eritreans only, please) who are deeply knowledgeable about the true history of Eritrea.  THE END