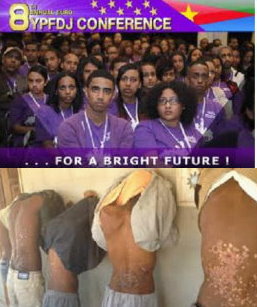 This week a judge reviewed and decided on the aspects of relationship between PFDJ and YPFDJ and found the difference was that the latter was fitted with wings to fly in the skies of the world to make the regime safe from the threats of the Eritrean Diasporas.  With having a commanding influence over the Eritrean activities outside Eritrea, the regime’s YPFDJ would ensure putting four words together: “Isu Nhna, Nhna Isu” as to secure the Eritrean Diasporas dedication to the tyrant. The focus of the YPFDJ is to ensure the Diasporas’ blind support and comprehensible words to their calls of urgent needs to serve the country through blind obedience to the tyrant’s iron rule.   Although the YPFDJ inside Eritrea imposes its terms on the Eritrean youth by fear of imprisonment, fear of torture and even by fear of death, what other than these can it offer to the Diaspora Eritrean youth in return for their support to the tyrant’s system.

Higdef’s grey haired leaders realizing their inability to invade the skies of the world with their slow gaits, they had to create YPFDJ to eliminate all kinds of dissents against the regime, be it inside Eritrea or outside Eritrea.  The duty of NPFDJ is to give the PFDJ a youthful appearance.  The members of NPFDJ are trained not to recognize the rules of the host countries nor play by them if they are to achieve the impossible in keeping the regime safe from its adversaries.  The members of NPFDJ are also trained to be systematic and loudmouth when negating crimes committed by the regime, which bogus claim of innocence of the tyrant became the reason, although illegitimate, for their taking legal action against Prof. Myrjam.

Like any department of the regime, YPFDJ has to comply with the regime’s acts and regulations. The YPFDJ is believed to be set on ambitious goals to take advantage of its rights to function in the host countries’ as members-served civil association. Indeed, the NPFDJ was created to serve as the eyes and ears of Higdef with the purpose to make the lives of Eritrean refugees worse.  Since its creation the NPFDJ crossed its lines interfering with the lives of naturalized citizens and asylum seekers in Europe, North America, Middle East, Australia and Africa.

The YPFDJ members are engaged in the following six-fold assignments, as eyes and ears of the regime.

-To invade the homes of the Diaspora Eritreans and keep the regime’s threats in the pipeline,

-To infiltrate and weaken the Eritrean opposition groups,

-To use coercion and threats to undermine asylum seekers’ confidence and control them,

-To use organized conspiracy targeting anti-regime asylum seekers to have their applications rejected, and

For YPFDJ, to deny the above activities is very easy but to carry out the above assignments in the Western world without breaking laws is impossible.  Similarly, to bring a legal action against an opponent without knowing the court’s decorum or procedures, the opponent’s defenses and how to address the related issues also demonstrate YPFDJ’s political incompetence and lack of legal literacy.  It is also disastrous to believe that the law is always silent.

The embassies and YPFDJ members should realize that it is a legal necessity for the asylum seekers to have to tell their backgrounds or past experiences as it clearly irrespective of the fact whether their narratives can be considered as defamation, if they are to make credible cases supported with evidences.  Such course of making cases for the asylum seekers became the YPFDJ focus and in an effort to easy the would be defamations to the regime, the YPFDJ members, as ambassadors of the regime, have designed their way of deflect the defamations through misinterpretation and attacking the enablers of the asylum seekers.  They also started to threat defenders of vulnerable asylum seekers with legal actions.  In line with their new initiative of using the court to silence the asylum seekers’ defenders, they took Prof. Myrjam to the court falsely suing her for defamation because she had called the association by the political program it practices.  The YPFDJ had no knowledge that one can be counter sued in cases of false accusation.  Although the YPFDJ was right that to sue and be sued in the West is part of their democracy, what the YPFDJ missed is that the law works two ways to serve justice.

The YPFDJ lost the trial with no chance for a new trial because of hard evidences linking it to the regime.  Absence of any reversible error in the judgment denies the YPFDJ to file for an appeal.  Thus, losing the right to appeal on the ground that there were some arguable errors in the judgment, exposes the YPFDJ to other lawsuits from victims of the regime besides impacting YPFDJ’s functions in host countries negatively.

The YPFDJ members, as reasonable people, might have not only regretted their actions against the asylum seekers had they seen the difficulties the refugee had been through but they might also have believed the regime was wrong in assuming there was a purpose in silencing the asylum seekers.  Indeed, the asylum seekers should narrate their past and present fears freely, as it.  Unless all the challenges they faced in their journeys form an integral part of their answers in their interviews, the asylum seekers will not be granted asylum for lack of narrate-able experiences that prove they would be persecuted on return to Eritrea.

It is, therefore, high time to empower the communities of the Eritrean Diasporas to defend themselves against threats from representatives of the regime.  The pipelines the YPFDJ and the embassies use to get into the houses of the Eritrean Diaspora houses should be exposed and reported to the authorities and their threats, if any, should be neutralized through public cooperation and actions.  Creating safe environments will also benefit the asylum seekers, who without peace of mind they will never be able to start their life again. Only if their minds are at peace, the asylum seekers will learn from their pasts and build on them.  Knowing what they know after they arrived safely, they should not forget what was like living in abject poverty in the refugee camps followed by their yet dreadful journeys to reach their destination, if they are to settle down and start helping those left behind in the camps.  Life is like taking turns and unless on arrival, the asylum seekers know what’s awaiting them and know what to do best to become best citizens capable of helping others and becoming voices of the voiceless, the Eritrean opposition is considered to be at loss.  The Eritrean opposition should not let the regime take advantage of its lack of strong connection with the communities.

In celebration of Prof. Myrjam’s court case victory against YPFDJ,