Imprisoned Eritreans complain of being forced to leave Israel 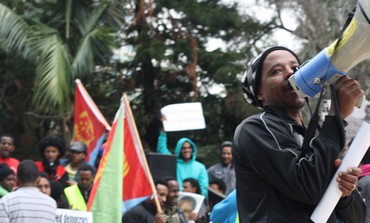 In one of the many testimonies a 28-year-old Eritrean detainee reported being repeatedly visited by a translator telling her to accept deportation to a third country (Uganda).

“He said we would not be free from the prison and we can only go to Uganda or Eritrea. I was frustrated and depressed. I do not want to go to Uganda. Today they called me and gave me a handwritten form in Tigrinya which said: `I came from Eritrea to Israel illegally and now I want to go to Uganda voluntarily. To do this I would like the Eritrean embassy to issue me a passport and all the necessary documents.’ They asked me to sign it and wanted to take my picture on video. I refused.”

Israel is a signatory to the 1951 Refugee Convention but does not recognize Eritreans as refugees, although it does not officially deport Eritreans and allows them to stay in Israel under a group defence (temporary group protection).

Staff at the Hotline for Migrant Workers, who collected the testimonies, say the government is forcibly trying to repatriate Eritreans: “These people have no access to a refugee status determination process, they are detained under the new amendment to the infiltration law that came into effect in June 2012, which allows detention of `infiltrators’ for an unlimited amount of time; now they are told they will never be allowed to leave the prison and their only option is to go back to Uganda/Eritrea. How can this be considered voluntary?” one staff member told IRIN.

The UN Refugee Agency (UNHCR) representative in Israel, William Tall, told IRIN the Ministry of Interior made an attempt to offer relocation to some 23 Eritreans to Uganda but without any result so far.

At the end of February he told Israeli newspaper Ha’aretz there was nothing voluntary about this process.

One Eritrean, Tesfamihret Habtemariam, was reportedly deported from Israel earlier this month and is now in detention at Cairo airport after five years in Israel, and may be returned to Eritrea.

UNHCR advises against repatriating Eritrean nationals because of the likelihood of their being punished on return to their country.

Under an updated Anti-Infiltration law passed in January 2012, all illegal border crossers are labelled “infiltrators” and can be detained for up to three years.

The Eritreans being held in detention camps in the south are generally not notified about their right to claim asylum or given the application forms needed to do this, report NGOs.

On 18 February, official documents from the Israeli assembly, the Knesset, quote Interior Minister Eli Yishai saying deportations (by definition forced) were not yet taking place.

He said more than a 1,000 nationals of northern Sudan and Eritrea had already left voluntarily and said he hoped a lot more would decide to leave.

Last week the Israel’s Attorney-General Yehuda Weinstein sent a letter widely reported in the local press to the director of the Interior Ministry’s Population, Immigration and Border Authority, Amnon Ben Ami, saying that under no circumstances should Eritrean nationals in Israeli custody be sent “to any destination outside Israel’s borders” until he (Weinstein) further clarifies these legal issues.