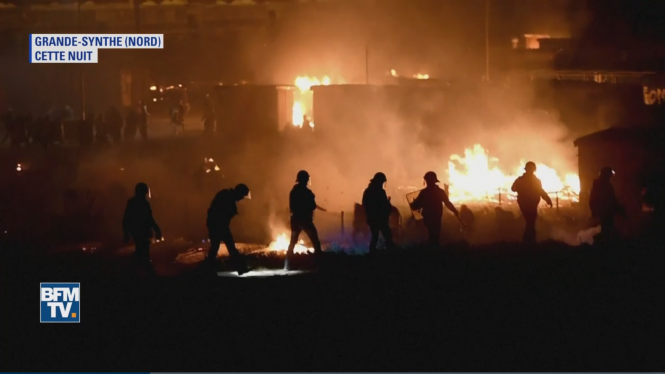 The Grande-Synthe immigrant camp near Dunkirk has been destroyed after a fight between Afghan and Kurdish people being homed there – with six people suffering serious knife wounds.

Red skies above the Linière humanitarian camp were visible for miles around and the fires were finally put out by firefighters. This morning the rows of cabins were just heaps of ashes.

Local sources said violence broke out about 19.30 after Afghan immigrants, recently arrived from the Calais immigrant camp, were unhappy that they were living in dormitory accommodation while the Kurds occupied most of the 300 cabins.

The first fires came about 22.30 and by 23.00 the camp was well ablaze with the Grande-Synthe mayor’s office saying firebugs were setting fires row-by-row as firefighters were fighting to save the cabins.

In the panic, all 1,500 immigrants were evacuated but local newspaper La Voix du Nord said some threw stones at firefighters and police at the camp but it was mostly other immigrants who were hit.

The camp was opened last year by Médecins sans Frontiers and Grande-Synthe mairie but Nord prefect Michel Lalande said it was left a “heap of ashes”. There was “no question” of rebuilding the site, and he said: “It cannot be rebuilt.”

Grande-Synthe mayor Damien Carême was out of town and not available for comment.