Hundreds of thousands have fled this country. This ghastly massacre is a reminder why. – The Washington Post

In Eritrea, your last year of high school is also your first year in the army. Rebels from the country fought a 30-year war against its much larger neighbor Ethiopia, and, because of a continuing land dispute, 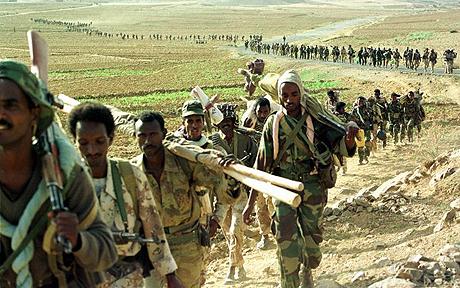 In Eritrea, your last year of high school is also your first year in the army. Rebels from the country fought a 30-year war against its much larger neighbor Ethiopia, and, because of a continuing land dispute, hostilities are still considered active. Although conscription isn’t exactly unusual around the world, in Eritrea, there are three huge downsides: Your obligatory service is indefinite, you’re not allowed to leave the country, and the monthly pay is dismal — equal to about $10 on the black market.

The rest of the world doesn’t really hear much about the country, as the foreign media is mostly barred entry, and Eritrea ranks dead last in Reporters Without Borders’ press freedom index (behind North Korea). But last week, unconfirmed reports began filtering through the crevices of the Internet about the possible killing of conscripts who attempted escape while being transported to a labor camp.

The most complete report describes a scene of utter chaos and desperation. Its version of the carnage goes like this: As a truck full of conscripts passed through the capital, Asmara, two jumped out and were immediately shot by guards in the truck. Then, just down the road, a more planned breakaway unfolded. Some conscripts had apparently alerted their family members in Asmara that they were being transported across the country, and they asked them to wait at a major intersection so that they could jump out of the truck and be quickly whisked away. Family members commandeered a city bus to block the road, but as the conscripts left the truck, they and their families were sprayed indiscriminately with bullets.

The numbers of dead and injured vary in the reports, ranging from four to 29. The tight-lipped Eritrean government indirectly acknowledged the incident in a tweet from its information minister, who claimed that it was an accident and that two conscripts had fallen off the truck.

If the story is true, it offers a glimpse into the terrifying system of conscription and forced labor in Eritrea, and the lengths to which people are willing to go to escape it. The United Nations estimates that 5,000 Eritreans leave their country every month as refugees. The Wall Street Journal recently referred to Eritrea as one of the “world’s fastest-emptying nations.” Many of them are young men, and researchers on the ground have noted that the ages of Eritrean refugees have gotten progressively younger, suggesting that they are leaving before conscription. Ten Eritrean soccer players refused to get on a flightback to Eritrea after a tournament in Botswana in October, two years after another group did the same in Uganda and was granted asylum.

Last year, WorldViews reported on a U.N.-led inquiry of human rights violations in Eritrea. My colleague Adam Taylor summarized some of the findings:

“The system leads to arbitrary arrests and detention, with torture and even enforced disappearances a part of life in Eritrea, the U.N. probe found, and even those who commit no perceived crime often end up in arduous and indefinite national service that may amount to forced labor. Escape is not a realistic option for many: Those who attempt to flee the country are considered ‘traitors,’ and there is a shoot-to-kill policy on the border, the report said.”

In the first eight months of 2015, more than 30,000 Eritreans used the central Mediterranean smuggling route from Libya to Italy — more than any other group — and it is presumed that many, if not most, of the about 2,700 of those who drowned during the journey were Eritrean.

The Office of the U.N. High Commissioner for Refugees (UNHCR) gives prima facie designations to Eritrean asylum-seekers, which means they are presumed to have good reason. Eritrea says the United Nations is mistaking conscription for forced labor and accuses the organization of fueling the exodus from the country. As refugees have begun to weigh heavily on European countries, and public opinion has shifted against open-door policies, some nations, such as Denmark, have imposed greater restrictions on Eritreans, citing fact-finding reports that claim human rights violations in Eritrea are not as bad as previously thought.

The surge in Eritrean refugees in the past two years also raises the possibility that the Eritrean government is less and less able, or inclined, to stem the flow of those leaving. Refugees send back remittances that provide Eritrea with hard cash, and allowing them to leave might serve as a safety valve to give the disaffected a way out that doesn’t involve fighting the government.