Hundreds of Migrants Die at Sea in Attempt to Reach Italy

Aid Workers Say Some 300 People on Four Boats Likely to Have Died Since the Weekend By DEBORAH BALL and LIAM MOLONEY Updated Feb. 11, 2015 11:46 a.m. ET ROME—Several hundred seaborne migrants are believed to have died in recent 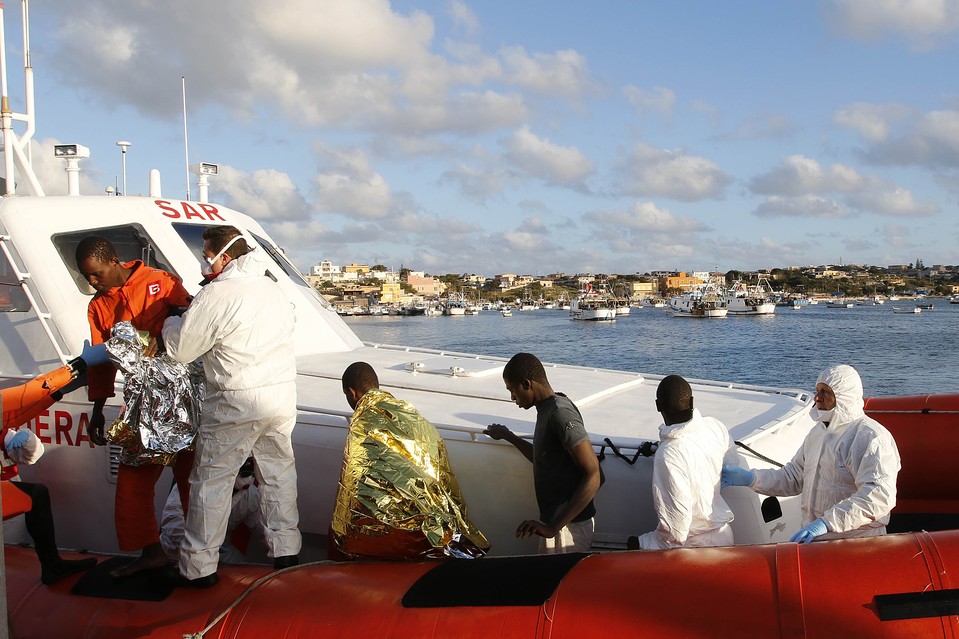 By DEBORAH BALL and
LIAM MOLONEY

ROME—Several hundred seaborne migrants are believed to have died in recent days as they attempted to reach Italy, marking one of the largest losses of migrants’ lives and highlighting the dilemma Rome faces in coping with huge flows of would-be refugees.

Early on Wednesday, refugees told aid workers that more than 300 people on four separate dinghies are likely to have died since the weekend as they attempted the treacherous Mediterranean crossing from Libya. The refugees were saved by Italian authorities, and on Wednesday morning they reached Lampedusa, the tiny Italian island that is the destination for many African and Middle Eastern migrants trying to reach Europe by sea.

The migrants told aid workers that four inflatable life-rafts left Libya on Saturday morning, carrying 100 to 110 people each. On Sunday, amid rough seas and high winds, the Italian coast guard said it received a distress call from one of the vessels about 40 miles from Tripoli and ordered a Luxembourg-registered commercial ship nearby to help bring on board 104 people. However, at least 29 people died from hypothermia even after they were pulled from the small dinghy.

According to survivors’ statements gathered by the refugee agencies on Wednesday, two of the other four boats capsized; nine people survived four days in frigid waters until they were saved and brought to Lampedusa early Wednesday. According to the International Organization for Migration, the survivors included three unaccompanied minors.

The fourth boat is believed lost, although the Italians have sent a search-and-rescue team. The survivors said that a large number of the victims were from the Ivory Coast, Senegal, Mali, and Gambia.

The shipwrecks mark the biggest loss of life since the European Union took over the patrols of the Mediterranean after Italy ended its Mare Nostrum program on Oct. 31. That program was an aggressive search-and-rescue operation put in place after at least 360 African migrants died trying to reach Lampedusa in October 2013.

Opposition from anti-immigration groups and a lack of support from other European countries pushed Rome to abandon Mare Nostrum, which rescued more than 150,000 migrants. Critics of the program say that Mare Nostrum provided a “pull factor” encouraging more migrants to attempt the risky passage because they were confident the Italians would save them.

The new EU patrols, dubbed Triton, are meant to be no more than a border-control operation, rather than a full-blown search-and-rescue operation, and extend just 30 nautical miles from the Italian coast.

By contrast, the rescue vessels involved in Mare Nostrum ventured well into international waters and close to the coast of Libya, the jumping-off point for the vast majority of seaborne migrants.

This week’s shipwrecks highlight the explosive mix of huge flows of Europe-bound migrants, increasingly aggressive tactics of people smugglers, and waning public support in southern Europe for programs to help migrants amid a protracted economic crisis.

Italy, which has long lamented the lack of a concerted EU effort to cope with migrants, is on the front line of these challenges. The numbers of seaborne migrants continue to rise; despite frigid temperatures and rough seas that usually deter sea crossings in the winter, more than 3,500 migrants landed in Italy in January alone, about 60% higher than January 2014, according to the Italian government. The persistently high numbers are due in part to the refugee crisis in Syria and the breakdown of law and order in Libya, which has thrown open a gateway for smugglers to ferry people into Italy.

Refugee agencies say that the high numbers arriving even after the end of Mare Nostrum is evidence that the search-and-rescue program didn’t generate a meaningful “pull factor.”

They have warned that the Triton operation would lead to more deaths. In a statement on Wednesday, Amnesty International accused the EU of “burying their heads in the sand whilst hundreds keep dying at sea.”

So far this year, about 450 people have died attempting to cross the Mediterranean, compared to 36 for the first two months of 2014, according to IOM figures.

The Mediterranean is by far the deadliest region for migrants; in 2014, about 3,200 died there, more than 10 times the number perishing while trying to cross the U.S.-Mexico border. According to the United Nations High Commissioner for Refugees, the youngest of those believed dead in this week’s shipwrecks was 12 years old.

Even with the end of Mare Nostrum, Italy has been continuously drawn well beyond its national waters to aid migrant boats, many barely seaworthy. In this week’s operation, the Italians went to the aid of the dinghies amid treacherous conditions without any involvement from Triton vessels, a spokesman for the Italian Coast Guard said.

Moreover, increasingly aggressive tactics by people smugglers have piled the pressure on Rome. In January, people smugglers set two boats carrying hundreds of Syrian refugees adrift, forcing the Italian coast guard into a dangerous rescue operation. Survivors of this week’s shipwrecks told IOM and UNHCR workers that the smugglers robbed them and forced them aboard the overcrowded dinghies, which began taking on water soon after embarking.

But even as Italy is forced to continue rescuing migrants—whose numbers are likely to rise with better weather in the spring—the government of Prime Minister Matteo Renzi must respond to pressure from anti-immigrant parties. The Northern League has surged to prominence in the past year on pointed criticisms of migrants.

In a Twitter message on Wednesday, the party’s chief, Matteo Salvini said that the shipwrecks are the “umpteenth demonstration that Mare Nostrum, Triton or whatever it is called are DEATH OPERATIONS that must be stopped immediately.”