How Rome is failing to face the refugee crisis in Italy

EuroNews “We are invisible people,” says a young woman from Eritrea in a perfect Italian accent and a shaky voice. “I have an Italian document, but these people have been waiting for a long time for 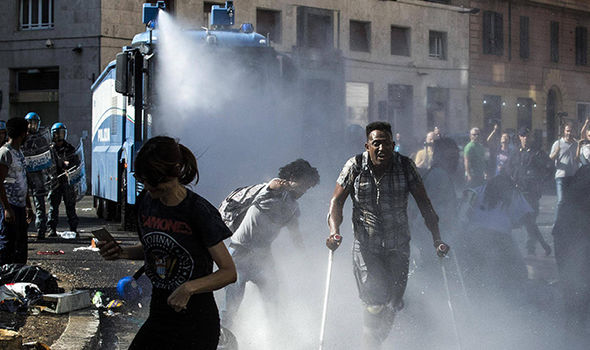 “We are invisible people,” says a young woman from Eritrea in a perfect Italian accent and a shaky voice. “I have an Italian document, but these people have been waiting for a long time for an answer and now they don’t even have a place to sleep,” she adds in front of the journalists, pointing fingers at the Italian institutions.

We are in the centre of Rome under the blazing sun of summer, one block from Termini train station, near ministries and embassies, where in the early morning of August 24 Italian riot police clashed with refugees occupying Independenza square. They used water cannon and batons, turning the central square in the Italian capital into a police headquarters.

The voice of the young woman is followed by others: Elisabeta, Ammanuel, Adhanom, all from Eritrea and Ethiopia – mostly refugees, UNHCR Italy says. Some of them, including children, are holding photos published in the media of what happened.

Since 2013 hundreds of these people had been living in a building in Via Curtatone, at the corner of the plaza. It was evacuated on August 19, but one hundred people occupied the square in defiance of the order to leave the building, provoking the police offensive of August 24. On the morning of the aftermath, the refugees – together with humanitarian organisations – gathered in the square to give a press conference. Most of the people present had lived in Via Curtatone for 4 years, a period of time in which they had never received an answer from Italian institutions regarding relocation. The pacific morning meeting aims to show the media their suffering, they say they are being treated like animals. Raising their voices, some refugees asked the journalists, “help us show the Italians and the world our suffering, we don’t want to be left alone.” Adhanom arrived in Italy in 2013 and while he shows me his temporary permit to stay in Italy, he asks himself what the Italian government is doing to face the migrant crisis. He doesn’t find an answer and after a moment of silence says he would like to go to Germany to start a new life.

While police say they had been hit by rocks, bottles and pepper spray, and that the refugees had gas canisters – some of which they had opened – the refugees have denounced the water cannons and batons, also used on women.

The prosecutor’s office has also started an investigation after a police officer was reported to have said, “If they throw something, break their arm.”

On August 25 the municipality of Rome had communicated that 40 people in fragile situations – women with children and old people – would be relocated to the town of Rieti. In the afternoon, however, the mayor of Forano, in the province of Rieti, was absolutely contrary to a relocation in the municipality, “because the community will not accept it, not for a problem of racism but because of objective problems already present in the area, characterised by the high number of migrants hosted in Forano,” reported the press agency Ansa.

Belonging for years to different private companies, the nine-floor building in Via Curtatone was occupied by thousands of refugees and asylum seekers in October 2013, gaining it the name “Lampedusa.” The 33,000 square metres became accommodation for people waiting for an answer from the Italian institutions, but in 2015 the owners challenged the occupation in a local court, demanding the evacuation of the building.

Among the 556 ‘residents’ ousted during the police blitz, only four were sent to the immigration office in Rome to be identified: the others all had official documents showing their asylum seeker status. It was at that moment that the firemen informed the authorities of the presence of cooking gas canisters and other flammable materials inside the building but no action was taken.

Back in April 2016 police commissioner Francesco Paolo Tronca included the building in a list of 16 constructions that had to be evacuated before the end of December of the same year. Again, nothing happened until August 19 2017 when the police burst into the building and ordered the refugees to leave.