How Not to Solve the Refugee Crisis: A case of mistaken identity put the wrong man in jail. Now it highlights the failure of prosecutions to tackle a humanitarian disaster.

On October 3, 2013, a Sicilian prosecutor named Calogero Ferrara was in his office in the Palace of Justice, in Palermo, when he read a disturbing news story. Before dawn, a fishing trawler carrying more 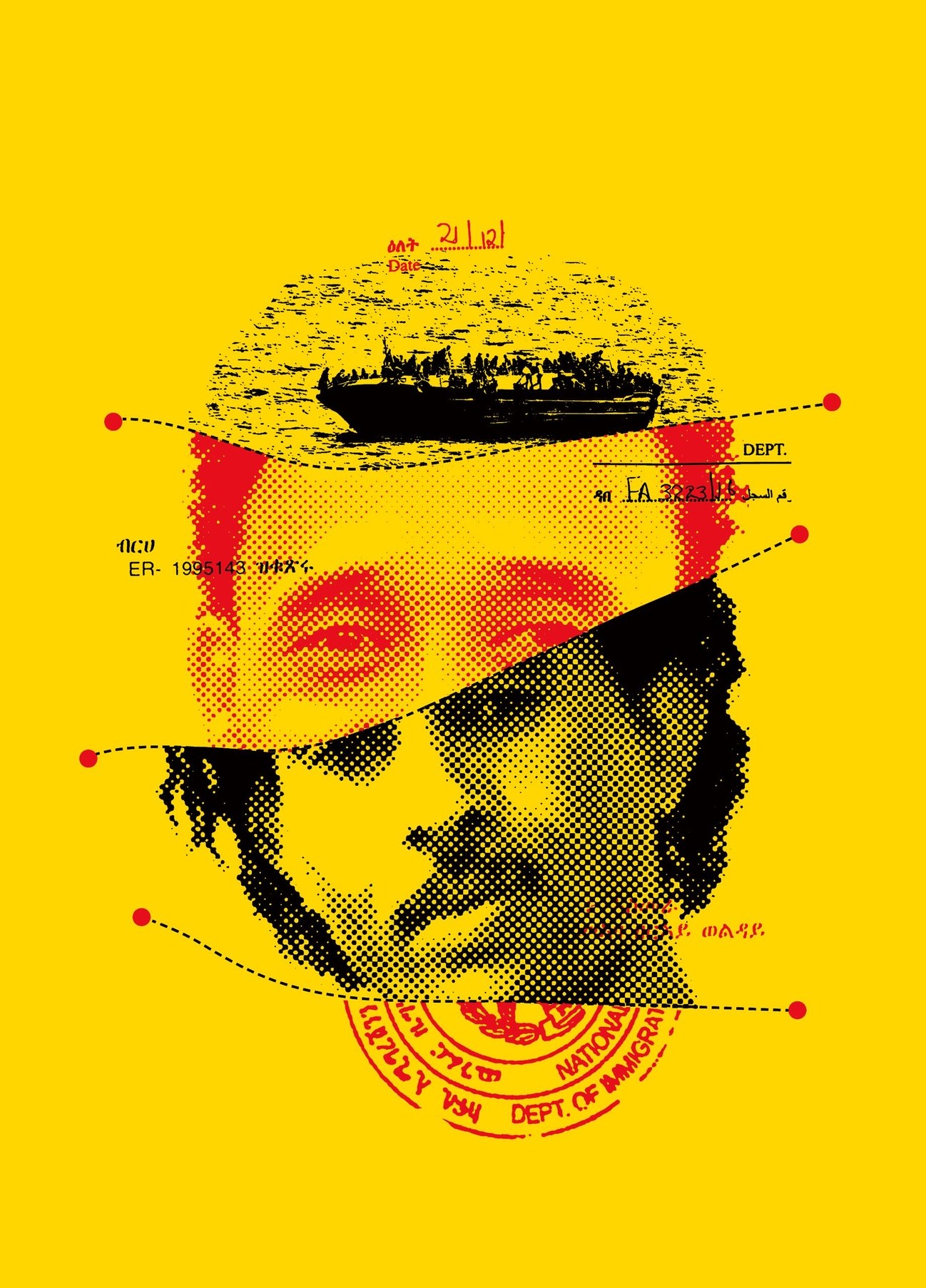 On October 3, 2013, a Sicilian prosecutor named Calogero Ferrara was in his office in the Palace of Justice, in Palermo, when he read a disturbing news story. Before dawn, a fishing trawler carrying more than five hundred East African migrants from Libya had stalled a quarter of a mile from Lampedusa, a tiny island halfway to Sicily. The driver had dipped a cloth in leaking fuel and ignited it, hoping to draw help. But the fire quickly spread, and as passengers rushed away the boat capsized, trapping and killing hundreds of people.

The Central Mediterranean migration crisis was entering a new phase. Each week, smugglers were cramming hundreds of African migrants into small boats and launching them in the direction of Europe, with little regard for the chances of their making it. Mass drownings had become common. Still, the Lampedusa shipwreck was striking for its scale and its proximity: Italians watched from the cliffs as the coast guard spent a week recovering the corpses.

As news crews descended on the island, the coffins were laid out in an airplane hangar and topped with roses and Teddy bears. “It shocked me, because, maybe for the first time, they decided to show pictures of the coffins,” Ferrara told me. Italy declared a day of national mourning and started carrying out search-and-rescue operations near Libyan waters.

Shortly afterward, a group of survivors in Lampedusa attacked a man whom they recognized from the boat, claiming that he had been the driver and that he was affiliated with smugglers in Libya. The incident changed the way that Ferrara thought about the migration crisis. “I went to the chief prosecutor and said, ‘Look, we have three hundred and sixty-eight dead people in territory under our jurisdiction,’ ” Ferrara said. “We spend I don’t know how much energy and resources on a single Mafia hit, where one or two people are killed.” If smuggling networks were structured like the Mafia, Ferrara realized, arresting key bosses could lead to fewer boats and fewer deaths at sea. The issue wasn’t only humanitarian. With each disembarkation, public opinion was hardening against migrants, and the political appetite for accountability for their constant arrivals was growing. Ferrara’s office regarded smugglers in Africa and Europe as a transnational criminal network, and every boat they sent across the Mediterranean as a crime against Italy.

Ferrara is confident and ambitious, a small man in his forties with brown, curly hair, a short-cropped beard, and a deep, gravelly voice. The walls of his office are hung with tributes to his service and his success. When I met with him, in May, he sat with his feet on his desk, wearing teal-rimmed glasses and smoking a Toscano cigar. Shelves bowed under dozens of binders, each containing thousands of pages of documents—transcripts of wiretaps and witness statements for high-profile criminal cases. In the hall, undercover cops with pistols tucked beneath their T-shirts waited to escort prosecutors wherever they went.

Sicilian prosecutors are granted tremendous powers, which stem from their reputation as the only thing standing between society and the Cosa Nostra. Beginning in the late nineteen-seventies, the Sicilian Mafia waged a vicious war against the Italian state. Its adherents assassinated journalists, prosecutors, judges, police officers, and politicians, and terrorized their colleagues into submission. As Alexander Stille writes in “Excellent Cadavers,” from 1995, the only way to prove that you weren’t colluding with the Mafia was to be killed by it.

In 1980, after it was leaked that Gaetano Costa, the chief prosecutor of Palermo, had signed fifty-five arrest warrants, he was gunned down in the street by the Cosa Nostra. Three years later, his colleague Rocco Chinnici was killed by a car bomb. In response, a small group of magistrates formed an anti-Mafia pool; each member agreed to put his name on every prosecutorial order, so that none could be singled out for assassination. By 1986, the anti-Mafia team was ready to bring charges against four hundred and seventy-five mobsters, in what became known as the “maxi-trial,” the world’s largest Mafia proceeding.

The trial was held inside a massive bunker in Palermo, constructed for the occasion, whose walls could withstand an attack by rocket-propelled grenades. Led by Giovanni Falcone, the prosecutors secured three hundred and forty-four convictions. A few years after the trial, Falcone took a job in Rome. But on May 23, 1992, as he was returning home to Palermo, the Cosa Nostra detonated half a ton of explosives under the highway near the airport, killing Falcone, his wife, and his police escorts. The explosives, left over from ordnance that was dropped during the Second World War, had been collected by divers from the bottom of the Mediterranean; the blast was so large that it registered on earthquake monitors. Fifty-seven days later, mobsters killed one of the remaining members of the anti-Mafia pool, Falcone’s friend and investigative partner Paolo Borsellino.

Following these murders, the Italian military dispatched seven thousand troops to Sicily. Prosecutors were now allowed to wiretap anyone suspected of having connections to organized crime. They also had the authority to lead investigations, rather than merely argue the findings in court, and to give Mafia witnesses incentives for coöperation. That year, magistrates in Milan discovered a nationwide corruption system; its exposure led to the dissolution of local councils, the destruction of Italy’s major political parties, and the suicides of a number of businessmen and politicians who had been named for taking bribes. More than half the members of the Italian parliament came under investigation. “The people looked to the prosecutors as the only hope for the country,” a Sicilian journalist told me.

Shortly after the Lampedusa tragedy, Ferrara, with assistance from the Ministry of Interior, helped organize a team of élite prosecutors and investigators. When investigating organized crime, “for which we are famous in Palermo,” Ferrara said, “you can request wiretappings or interception of live communications with a threshold of evidence that is much lower than for common crimes.” In practice, “it means that when you request of the investigative judge an interception for organized crime, ninety-nine per cent of the time you get it.” Because rescue boats routinely deposit migrants at Sicilian ports, most weeks were marked by the arrivals of more than a thousand potential witnesses. Ferrara’s team started collecting information at disembarkations and migrant-reception centers, and before long they had the phone numbers of drivers, hosts, forgers, and money agents.

The investigation was named Operation Glauco, for Glaucus, a Greek deity with prophetic powers who came to the rescue of sailors in peril. According to Ferrara, Sicily’s proximity to North Africa enabled his investigators to pick up calls in which both speakers were in Africa. Italian telecommunications companies often serve as a data hub for Internet traffic and calls. “We have conversations in Khartoum passing through Palermo,” he said. By monitoring phone calls, investigators gradually reconstructed an Eritrean network that had smuggled tens of thousands of East Africans to Europe on boats that left from Libya.

By 2015, the Glauco investigations had resulted in dozens of arrests in Italy, Germany, Sweden, and the United Kingdom. Most of the suspects were low-level figures who may not have been aware that they were committing a crime by, for example, taking money to drive migrants from a migrant camp in Sicily to a connection house—a temporary shelter, run by smugglers—in Milan.

But the bosses in Africa seemed untouchable. “In Libya, we know who they are and where they are,” Ferrara said. “But the problem is that you can’t get any kind of coöperation” from local forces. The dragnet indicated that an Eritrean, based in Tripoli, was at the center of the network. He was born in 1981, and his name was Medhanie Yehdego Mered.

Click on the Link Below to Read the Story in Full.

THE NEW YORKER: How Not to Solve the Refugee Crisis