By Petros Tesfagiorgis The people to people extraordinary and successful campaign to help refuges shines a light on those living in squalid situation in Calais/France known as the “Jungle”. Serving refugees with hot-food for free symbolises 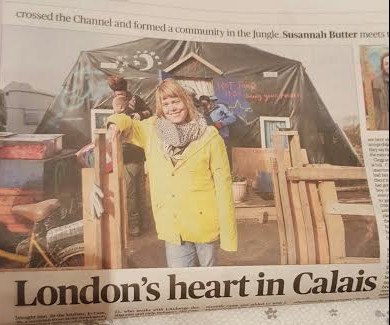 The people to people extraordinary and successful campaign to help refuges shines a light on those living in squalid situation in Calais/France known as the “Jungle”. Serving refugees with hot-food for free symbolises the concern of the British ordinary people, particularly the young, to their fellow human beings who are in search of a sanctuary and a home denied in their country of birth.

On Wednesday 10 February 2016 in a daily newspaper, Metro,   Susannah Butter wrote. “From street-food chefs and playwrights to nail artists and musicians – an army of volunteers has crossed the Channel and formed a community in the Jungle”. Susannah Butter talked with many of the pioneers   such as Ben Harrison, a 20 years old from Dulwich who is involved in building shelters in the jungle and was able to build hundreds.   There are lots of other activities taking place – feeding people, bringing warm clothes, building libraries, teaching English etc. Susannah wrote “Volunteer Liz Clegg, 50, has become a de facto mother to many of the boys who are here alone.  Clegg and her daughter Inca, 23, work with Citizens UK (1) to help the unaccompanied minors in the camp.

Established Eritreans in the UK hardly participates in these humanitarian activities. Giving support to refugees by Eritreans is shamefully politicized.   It is a consolation, however, to see very few Eritreans with conscience who regularly visit Calais with food and worm clothes. How about the opposition political or civil organisations. They do waste precious time bickering among each other.   Very little time is given to come up with a clear action plan and strategy that also addresses the refugees’ crises.

A typical example is the way a phantom group called    “Our voice” dismisses the Forum “Medrek”   as a top-down movement that quenches the thirst of the Medrakite for power.   Such attitude is typical of an arm chair revolutionaries who design solutions from their comfort zone in the West.  It is good on paper but not applicable to the reality on the ground (more on part 2).  On the contrary, it is bold initiative on the part of Medrek bringing together the various Eritrean political parties, who tried to unite over the years but failed, in a conference in Nairobi, Kenya and agree on a plan of action.   By working together   they can stand up to the new aggressive campaign to paint the oppressive regime in Eritrea a human face and to convince the international community that there is no human rights violations in Eritrea. It is also to justify the 200 million Euro grant from EU where there is a lot of criticism from the public.  To this end in this moment in time the regime’s strategy is three fold.

AMSTERDAM (IDN) – A Court in Amsterdam struck down Meseret Bahlbi lawsuit against Mirjam van Reisen, Dutch professor and human rights advocate. The judge found that she was not guilty of libel and slander and that the youth party of the Eritrean regime can be seen as a means of collecting intelligence abroad. The decision comes as a huge relief not only for the Dutch professor, but also for the Eritrean Diaspora across Europe.

On 11 /02/2016, a lectures initiated by Ruby Sandhu in Collaboration with Westminster University took place at the University from 6.30 to 9.00pm. The title of the talk was “an Extractive Industry, Gender & Empowerment”.

The speakers were:  Dr Katy Jenkins a senior Lecturer in Sociology and co-director of the Centre for International Development at Northumbria University.

Seble Ephrem Chairman of Eritrean Relief Association (ERA-UK) who claimed active involvement in the resettlement and integration of Eritreans in the UK with an active interest in the role of gender and Eritrea.

Todd Romaine is the CSR VP for Nevsun Resources limited a mining company operating in Eritrea. He has a key role to ensure that the mine provides positive development within Eritrean Society.

Although it was open to public there were only 19 people. 4 from the justice seekers in UK, 3 or 4 supporters of the regime, 3 from the London Mining net Network who challenged Todd Romaine in the area  Nevsun‘s  complicity with the regime by employing   forced/slave labour from the national service.

Seble  was asked in line with aims and objectives of ERA-UK if  she sent aid  to Eritrean Refugee stranded in  the jungle Calais/France like what other humanitarian organisations are doing or any support to those more than 100,000 Eritreans languishing in refugee camps in the Sudan. She was very frank the answer was no. She said ERA-UK has projects inside Eritrea, unlike yesterdays, it is very small.  The truth is giving aid is shamefully politicized that is why the supporters of the regime and those who maintain the conspiracy of silence, keep a blind eye to the pains and suffering of the Eritrean refugees – their people, relatives and friends.   It a shameful history.  There was a remark that Seble is not the right person to talk about the heroine of women fighters during the long years of struggle because there are many of them in UK living as refugees running away from the country they liberated. They should be the ones to tell their story a real story.

Dr Katy did not show up to the meeting.  We learned afterwards that she dropped out after she was tipped off that the meeting was just a propaganda campaign.

What is amazing is that the meeting was covered by ERI-TV as a success during the week end. The few participants were replaced by larger audience.    This was in line with ERI-TV- slogan “Serving the truth” while the truth is shoved behind the curtain.

The various campaigns were not fruitful. The court incident has fired back and exposed the Young PFDJ as an arm of the regime which alerted the Dutch Government and people as it is widely covered by the media in Holland. It has serious implication throughout the EU countries.

On  the contrary all  these attempts to paint a human face to a dictator is giving rise to more  coverage of Eritrea and so more exposure of the regime as the perpetrator of gross human rights violation.

On 12/02/ 2016: On CBS TV in Canada:   Nevsun in Eritrea – Dealing with a dictator – the Fifth estate by Mark Kelly – exposure of human rights violation was covered – there Michaela wrong – stripped PFDJ of its cruelty and violation. The question in the CBS TV was: What is the price of doing business with a dictator?

The same day – 11 February- Ruby led a work shop.  I quote from news real “A workshop on natural resources development in Eritrea organized by the Eritrean Embassy in the UK was held in the city of London on 11 February.

The regime by giving concessions to mining companies can have powerful friends to lobby the Western Governments to keep a blind eye to the gross human rights violations in Eritrea’s.  At the same time it represents a formidable challenge to all human rights activist and the opposition.