‘Dubs eligibility rules’ restricting child migrant entry to UK by age and nationality slammed by shadow home affairs minister The Home Office has come under attack over the publication of new, highly restrictive, eligibility criteria for 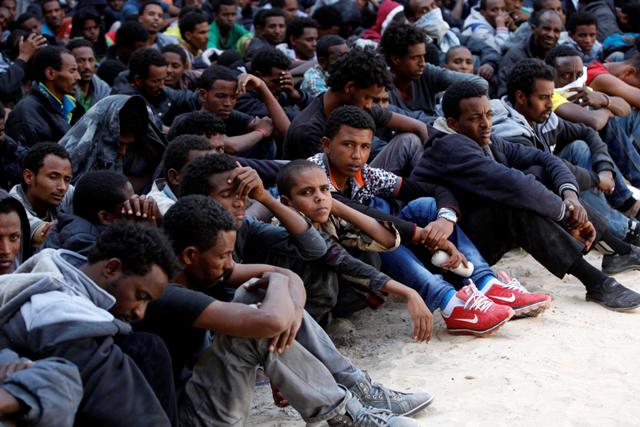 The Home Office has come under attack over the publication of new, highly restrictive, eligibility criteria for child refugees hoping to be transferred from France to Britain, which will stop many Eritrean, Afghan and Yemeni teenagers aged 13 or 14 getting sanctuary in the UK.

The Home Office minister Robert Goodwill was also under pressure to explain why his department had issued eligibility rules excluding 16- and 17-year-olds, of all nationalities, for consideration for transfer to Britain under the Dubs amendment of the Immigration Act.

MPs from all parties expressed concern about the criteria, published Monday in response to an urgent question from the Liberal Democrat MP Tom Brake.

Goodwill said the government’s intention had always been to prioritise the youngest. He added: “We remain absolutely committed to bringing all the eligible children over to the UK as soon as possible.”

Giving the first update since the clearance of the Calais camp two weeks ago, Goodwill said 318 minors had been brought to the UK, 60 of whom were girls, 200 of whom were brought in under a family re-unification programme mandated by the Dublin regulation in EU law, with the remainder transferred under the Dubs amendment.

The shadow Home Office minister Carolyn Harris described the new criteria as a disgrace and not in the spirit of the Dubs amendment. “A child is a child until the age of 18,” she said. “It is wrong to restrict a child’s rights to transfer based on their age.”

The new guidelines state that to be eligible for transfer to the UK under the Dubs amendment children from the now dismantled Calais camp had to meet one of the following criteria: being 12 or under; at high risk of sexual exploitation; aged 15 or under and of Sudanese or Syrian nationality. Teenagers who have relatives already in the UK will still be eligible to go there under European family reunification legislation.

Yvette Cooper, chair of the Home Affairs committee, said: “I remember the debates on the Dubs amendment and we did not discuss ruling out 13-year-old and 14-year-old Eritreans on an arbitrary basis.” She asked for clarity on the number of children likely to be transferred from France, adding that “it sounds considerably lower than the numbers he and I have discussed”.

Goodwill refused to give a clear answer on the number of children who would be helped. He said the government expected to bring several hundred more children from France, in addition to more than 318 who had already come to the UK under the Dubs amendment and under European laws that allow entry to children with close family members in the UK.

Alf Dubs, the Labour peer who forced the government this year into a U-turn on accepting child refugees, successfully getting his amendment included in the Immigration Act, said he was alarmed by the new regulations. “It is very disappointing. They said they were going to enter into the letter spirit of the amendment. I think this is rolling back on that commitment.

“This is the first time I have heard them say they have to be Sudanese and Syrian. I would be very concerned about Afghanistan and Eritrea, where there are children who have fled, and [are at] risk of war and persecution, of whom many, if not all, would have a right to refugee status under the Geneva convention.”

He said that many of the 1,600 children from Calais who were now in reception centres in France would feel desperate at the news and would return to the port to risk their lives trying to smuggle themselves to the UK. “Many of the children who were in Calais were given undertakings that their claims would be considered, and are now being told that their claims are not eligible. I dare say they will go back to Calais and try to take matters into their own hands,” he said.

But Goodwill said the government had laid down nationality related restrictions, based on those countries which had a 75% success rate in asylum applications. “It is absolutely imperative that the children we bring across are more likely to qualify for asylum,” Goodwill said.

A spokesperson from Save the Children said it was important to avoid assessing children according to “arbitrary criteria”, adding: “The Dubs amendment was tabled and accepted in the spirit of helping the most vulnerable children caught up in this crisis across Europe.

“In order to stay true to this spirit, rather than applying arbitrary criteria, each child’s unique vulnerabilities should be taken into account. The government must ensure that a full and proper best-interests assessment is carried out, which respects the needs of children who have already been pushed from pillar to post in search of safety.”

On Wednesday a group of 25 Kindertransport survivors wrote to the home secretary, Amber Rudd, calling on the government to accept 1,000 of the Calais children by Christmas.

The letter says: “During the camp demolition you told parliament that you believed it would be a good outcome if Britain took in half of the total number of children. We agree. It is now clear that there were some 2,000 unaccompanied children in Calais at the time of demolition.

“We therefore urge you to fulfil the commitment you made and pledge to transfer 1,000 of the Calais children by Christmas. Compared to the 95,000 unaccompanied children who arrived in Europe last year in the refugee crisis, this is not too big an ask.”

The letter, coordinated by Sir Erich Reich, chair of the Association of Jewish Refugees Kindertransport group, and signed by, among others, Simon Wessely, president of the Royal College of Psychiatrists, expressed concern at the uncertainty experienced by the 1,600 children from the camp in Calais, made anxious by the delay and absence of information.

“Britain has a proud history of welcoming children fleeing conflict and persecution. As Kindertransport survivors and family members we are testament to this courage and compassion. We urge you to demonstrate these values again now in your response to the Calais children left behind in France,” the letter concludes.