Hibernation in the Summer Months in Addis Abeba University

A Phd candidate in the University of Addis Abeba, recalls after tweenty five years the importance of the Port of Assab(ወደብ ዓሰብ ኣብ ኤርትራ አትርከብ): and writes in the ethiopian websites aigaforum,Tigraionline and Zehabesha.coms 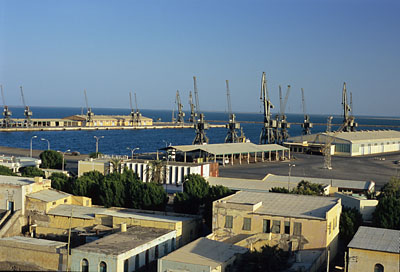 A Phd candidate in the University of Addis Abeba, recalls after tweenty five years the importance of the Port of Assab(ወደብ ዓሰብ ኣብ ኤርትራ አትርከብ): and writes in the ethiopian websites aigaforum,Tigraionline and Zehabesha.coms……… as follows………………..

The Necessity of Aseb Port to Ethiopia [Ethiopia was powerful only when it had full access to and control over the Red sea.] I am writing this article with heart breaking news that the Eritrean government has leased our Aseb Port out to our strategic enemies who never want Ethiopia to survive as a nation. I want to share you my sincere feeling that we have a national and moral responsibility to pressure the government in power to bring the port back and unlock our country from political and economic insecurity. Aseb Port must be one of the most important strategic national interests of our country alike the politics of Nile water. Ethiopia is now not only paying millions of dollars to import the massive goods and services to support the ongoing development endeavor and feed its nearly hundred million population, but also lives under external threat. Ethiopia had no information when the Eritrean regime leases the port out. It was only after the Eritrean regime had leased the port out to the united Emirates and its allies that the Ethiopian prime minister mocked over Eretria. This gentleman Mr Gebrerufael Girmay (PhD Candidate) Addis Ababa University …..concludes…….

The issue of the port of Aseb is not a dead end. It is the greatest assignment undone set aside to the current generation to bring it back once and forever. The importance of the Port of Aseb to Ethiopia is as much greater as the importance of the Great Renaissance Dam construction in the Nile basin. Like what we have been doing in Nile, nearly hundred million Ethiopians will soon sing the same song. Indeed, the government in power has the national and moral responsibility to change its position about the Port of Aseb and facilitate bringing it back to 5 Ethiopia without the port our future is uncertain. The unity and unreserved effort of all artists and academia to song and write about the port is equally important. Ethiopia must use all possible strategic instruments like international diplomacy and law, local treaties and lastly but not least a military force whenever necessary to back the port in order to unlock the country from unsecured political instance and slash poverty through free importation of the heavy goods and commodities that support nearly hundred million mouths. Let`s unite for our national interest!!!

Warm bloded as well as cold blooded animals hibernate in the Winter months to save energy and win the challenge of food scarcity in those  long winter months.This educated fellow in the capital city is getting after 25 years his senses back and gets to his drawing table and charts Our Port of Assab into the landscape of Tigray and Wollo provinces and puts his lame excuses to build Greater tigray and his expanssionist attitude like his cousine Issayas Afewerki who initiated the boarder conflict.For me these individuals meet in their mania of invassion and depriving our nation of its pors and  sell out to neighbouring countries including Saudi Arabia for cash and for prestige.

Our future politisian with Phd degree would initiate war between the two friendly ieoples of  Eritrea and Ethiopia. My advice is please Do Not Do That!

Spitting Images have helped Margerate Tacher and Ronald  Regen to pursue their Ultra Right political Idiology and destroyed the aspiration of the working classes in Europe and the USA. I feel bad aout that and I do not hope to see such Ultra Right wings dominate the whole nation with that dangerous message as Ghebrufael which leads us to unwanted  chaos and destructive nature of idiology;

Spitting Images:Wikipedia has put it as follows………

Spitting Image is a British satirical puppet show, created by Peter Fluck, Roger Law and Martin Lambie-Nairn. The series was produced by ‘Spitting Image Productions’ for Central Independent Television over 18 series which aired on the ITV network. The series was nominated and won numerous awards during its run including 10 BAFTA Television Awards, including one for editing in 1989 and two Emmy Awards in 1985 and 1986 in the Popular Arts Category.[1] The series featured puppet caricatures of celebrities prominent during the 1980s and 1990s, including British Prime MinistersMargaret Thatcher and John Major and other politicians, US president Ronald Reagan, and the British Royal Family; the series was the first to caricature Queen Elizabeth The Queen Mother.[2]

One of the most-watched shows of the 1980s and early 1990s, the series was a satire of politics, entertainment, sport and British culture of the era, and at its peak it was watched by 15 million people.[3] The series was cancelled in 1996, after viewing figures declined. ITV had plans for a new series in 2006, but these were scrapped after a dispute over Ant & Dec puppets used to host Best Ever Spitting Image, which were created against Roger Law’s wishes.[4] Forgiveness for his Naivety!

I am ready to forgive this guy if he is naive to the past events, that both Ethiopians and Eritreans were fighting against Military dictatorship in the whole area and were able to get rid of the Cruel juntas destructive idiology and majors taken by Menghisto Haile Mariam to subjugate both Ethiopian and Eritrean peoples by his terror. The late Prime Minister of Ethiopia Meles Zenawi has already answered the issue of wanting a port for Ethiopia and accepting the reality of the statusquo  then and may be later.But as far as I am concerned there are other alternatives, for example a conference on such issues, boarder issues if there are such issues and a peaceful coexistence between neighbouring countries in the Horn of Africa, namely betwwen Ethiopia and Eritrea and between Eritrea and Djibouti and also the exististing cooperation beween Ethiopia and Somalia etcc…

on the issue of Uniting Ethiopians by bringing the Assab issue on the table would be futile.There are many other common issues between Ethiopians and Ethiopian nationalities as in other African countries today. However there are certain ideas he put on his paper that are beyond reality and logical thinking.

His political thinking has failed him to materialize his ego and chauvanist ideas by saying this………..

We all well know that Eritrea was part and parcel of Ethiopia since human history until 1990s. There has not been an Eritrean identity or history prior 1990s. Indeed, the Eritrean people do have the same psychological makeup, language, history and cultural values and norms with Ethiopian people. No people in the world resemble Ethiopians as Eritrean people do. On the other hand, the consecutive feudal and autocratic Ethiopian regimes oppressed the people alike all Ethiopians though there was no special oppression and mistreatment targeted to the people of Eritrea. Anyways, unable to withstand the oppressive and exploitation of the people by the local and central feudal and the military regime, the Eritrean People Liberation Front (EPLF) stood against to and instigated an armed struggle on the regimes in which uncountable lives have lost from both sides.

A good neighbourliness doesn’t dwell on one sided chauvanism and  simple ideas it must be based on honesty and openess. So my friend has to double read history and not base his writings on fables.While saying this Eritrea and Ethiopia have to build Trust and  Friendship in all aspects, humanity as well as sharing common values.

They both have common needs and  interests for the future to come.We do not need people who are narrow minded and do not see the bigger picture of world out look.

I have hope and wish for both countries to build friendship and come up with ideas for peace and peaceful coexistence.We need to share what we have and avoid greed and egocentricism!

I have a better Internationalist outlook than the Ethiopian writer of this issue of aquiring Assab who even doesn’t know the port itself and the country he talks about…….Amen!

a regular reader of both Ethiopian and Eritrean concerned websites.