By Robert MacPherson (AFP) WASHINGTON — Life in authoritarian states is likely to get tougher before it gets better as their citizens gain more access to the Internet, Google's executive chairman Eric Schmidt said. Speaking at a 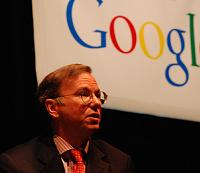 WASHINGTON — Life in authoritarian states is likely to get tougher before it gets better as their citizens gain more access to the Internet, Google’s executive chairman Eric Schmidt said.

Speaking at a seminar in Washington, Schmidt said hundreds of millions of people in non-democratic nations will be trading in their basic cellphones for Internet-connected smartphones as prices fall over the next few years.

“When that happens, all of sudden, we are going to hear the distinct voices of the citizens of those countries in a way that we’ve never heard before,” said the globe-trotting Schmidt, a recent visitor to North Korea.

“But their governments are not like our governments… In that context, (autocratic) governments are going to work really, really hard to stop this, because the way to really get a dictator going is to threaten his authority.

“They’re going to do things like restrict speech and restrict assembly — but they are going to find it impossible to do as comprehensively as they can,” he added.

This “mobile revolution” will become “the defining story” for the 57 percent of the world’s population that lives in autocratic countries over the next five to 10 years, he predicted.

Schmidt delivered the keynote speech at a Google-sponsored “big tent” seminar, the first ever in the US capital, that cast a spotlight on freedom of expression in the digital age.

He quipped about Iran’s plans for a homegrown “Halal Internet” — Israel would be wiped off its online maps, he predicted — and how officials in Pyongyang had tried but failed to get him to spill the beans on the next version of Google’s Android mobile software.

And while he once thought North Korea to be “the absolutely worst place” on Earth, Schmidt extended that dubious honor to Eritrea, scene of an apparent coup in January that went largely unreported for weeks.

“Think of it, how isolated these poor Eritreans are,” he said.

Other seminar participants included the outgoing US deputy secretary of homeland security, Jane Holl Lute, a champion of a free and open Internet despite the way it can be exploited by extremists.

“It’s not a crime in this country to be radical” unless extreme views are expressed through violent means, Lute said, speaking less than two weeks after the Boston Marathon bombings.

Lending some comic relief to the seminar was Saudi standup comedian Omar Hussein, whose mock Arabic news program on YouTube — styled on Jon Stewart’s “The Daily Show” in the United States — attracts a million views per episode.

“The only difference is that we cannot talk about politics. Or religion. Or sex,” said Hussein, 26, the American-born son of Saudi expats whose resume includes a stint as an engineer in a baby diaper factory.

“But when you have more restrictions you actually become more creative,” added Hussein, whose 22-year-old wife Lama Sabri is the show’s lead writer.

Far from trying to shut down the show, titled “On the Fly,” Hussein said Saudi ministers have reached out to its producers, hoping it might talk about their work as a way to connect with Saudi youth who are active on social media.

Whereas “On the Fly” in its first season took care to warn a government minister that it would be making a joke about him, it recently depicted “a bunch of ministers” as Pokemon characters without asking them first.

“We’re taking it step by step,” Hussein said. “Episode by episode, we can actually discuss more interesting topics. The risk is that if you jump a big jump, that’s when it’ll be the ‘season finale.'”