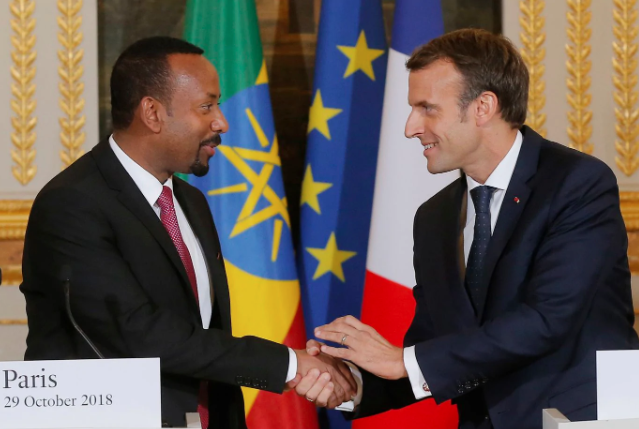 The 42-year-old African leader was on a working visit Monday to France in his first trip to Europe since taking office in April.

In a joint declaration, France welcomed “the rapprochement between Ethiopia and Eritrea.” Both countries pledged to “continue their efforts in order to promote peace and prosperity in the region.”

Ethiopia’s new leader “chose a courageous path, we will stand by his side,” Macron said at a news conference.

Abiy said he expects Macron to play a key role in peacemaking efforts between Eritrea and Djibouti — Ethiopia’s neighbors which have agreed last month to normalize ties a decade after a border dispute led to brief military clashes.

Within a few months, Abiy has implemented sweeping economic and political reforms, among them making peace with longtime rival Eritrea, which has set off a series of diplomatic thaws in Africa’s turbulent Horn of Africa region.

But the push for democratic reforms in Africa’s second most populous country hasn’t been smooth. With the widening political space and returning opposition voices, ethnic and other tensions have flared and human rights groups have warned against a return to the repressive tactics of mass arrests and internet cutoffs. Abiy also has been the target of an assassination attempt.

“Overall the reform process is contributing to the greater peace in the country,” Abiy said in Paris.

Macron and Abiy also pledged to increase cultural cooperation, especially on World Heritage sites such as the rock-hewn churches of Lalibela.

France will contribute to the maintenance and renovation of the site, Abiy said.

Macron announced he will visit Ethiopia in March.

AP writer Cara Anna in Johannesburg contributed to the story.