For Immediate Release: Israel: NewPressure on Asylum Seekers to Leave 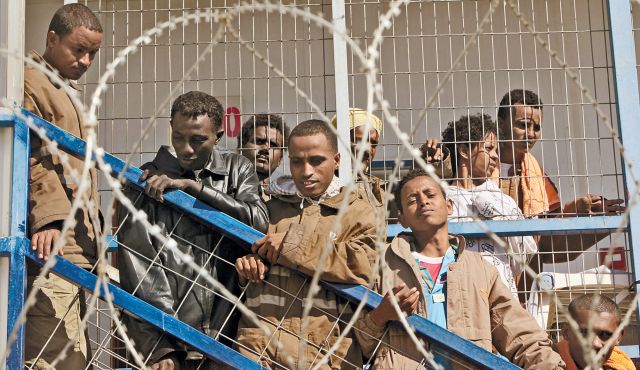 (Tel Aviv, July 15, 2013) – Israeli authorities are using new procedures to pressure at least 1,400 Eritrean and Sudaneseasylum seekers, some detained for over a year, to return to their countries, Human Rights Watch said today. Under international law, asylum seekers should be detained only in exceptional circumstances, their claims should be fairly examined and they should never be forced orpressured to return to a country where they face a serious risk of persecution.

Recent guidelines instruct Israeli officials on how to interview detainees while filming them about whether they wish to give up their asylum claims and return to their home countries. Detainees are told that if they do not agree to be sent home, they face years in detention. On July 14, 2013, 14 Eritreans detained for many months left Israel for Eritrea via Istanbul.Some of the group told the UN refugee agency they would “do anything to get out of prison.”

“It doesn’t matter how Israel dresses this up, this is using the threat of prolonged detention to force Eritrean and Sudanese nationals to give up their asylum claims,” said Gerry Simpson, senior refugee researcher at Human Rights Watch. “Israel should end its unlawful detention policy and release all asylum seekers while their claims are fairly examined.”

Worldwide, some 80 percent of Eritrean asylum seekers are granted some form of protection because of credible fears of persecution relating to punishment for evading indefinite military service in Eritrea and other widespread human rights abuses. Under Sudanese law, anyone who has visited Israel faces up to 10 years in prison. Sudanese officials have said the courts will apply the law.

The 14 who left Israel on July 14 are part of a group of20 detained Eritrean asylum seekerswho in early July signed papers agreeing to return to Eritrea, according to the United Nations High Commissioner for Refugees (UNHCR). Israeli officials took them to the Eritrean Embassy in Tel Aviv, which issued them travel documents.

As of late June, UNHCR reported that almost 2,000 African nationals were in detention in Israel, including 1,075 Eritreans – all but 28 of whom had lodged asylum claims – and 625 Sudanese – at least half of whom had claimed asylum. UNHCR says that the authorities have rejected about 30 Eritrean asylum applications and reached no decision on the rest.

The detainees have little hope of being released because of restrictive and unlawful Israeli asylum laws and policies. On February 25, UNHCR told the Israeli newspaper Haaretz that an “agreement to return to Eritrea under a jail ultimatum cannot be considered voluntary by any criterion.”

According to refugee rights activists, in late June, more than 300 detained Eritrean asylum seekers went on hunger strike for about a week in Israel’s Saharonim Detention Center to protest their prolonged detention. Some left in ambulances, and their condition is unknown. Israeli news reports said that prison officials acknowledged transferring detainees to other parts of the facility and to prisons in an effort to end the strike.

On June 27, Israel’s attorney general approved the new procedures, which he said aimed to document “the free will of infiltrators” who are in detention in Israel, and who wish to return to their home countries of Eritrea and Sudan. The procedures cover all Eritreans and Sudanese nationals detained under Israel’srecently amended Prevention of Infiltration Law, also known as the Anti-Infiltration Law.

The procedures authorize Border Control officers to record video interviews in which they ask detainees requesting to leave Israel “open ended questions” to clarify whether they are “aware of the situation” in their countries of origin. If the detainee has claimed asylum, the officers should explain that the person may “freeze” the asylum claim and agree in writing to return to the country of origin.

An official who believes the detainee’s request does not “express free will” can determine that the detainee should remain in detention. The procedure states that a detainee can retract a decision to return home at any point, but that the person will return to detention.

“The Israeli authorities are doing everything they can to present blackmail of asylum seekers as lawful procedure,” Simpson said. “No matter how many laws and regulations the authorities adopt, detainees agreeing to return to countries they fled do so because prolonged detention has broken their resolve.”

International law prohibits refoulement – the forced return to a serious risk of persecution. Human Rights Watch said Israel violates the refoulement prohibition if Eritrean or other asylum seekers “choose” to return to their country after Israeli authorities threaten prolonged or indefinite detention as the only alternative. The 1951 Refugee Convention bars such return “in any manner whatsoever” to places where a person would face a serious risk of persecution.

UNHCRguidelines ondetention say asylum seekers should be detained only “as a last resort,” as a strictly necessary and proportionate measure to achieve a legitimate legal purpose, and that countries should detain a person for expulsion only after the person’s asylum claim has been finally determined and rejected. Detention is permitted only briefly to establish a person’s identity, or for longer periods if it is the only way to achieve broader aims such as protecting national security or public health.

“Every few months, the Israeli authorities adopt new laws and procedures to detain as many Eritrean and Sudanese nationals as possible to then force them out of the country,” Simpson said. “Israel’s aim is crystal clear: use the threat of long-term detention to thwart thousands, and possibly tens of thousands,of asylum claims.”

For more information on recent steps to expand the use of detention, press detainees to leave Israel and make life more difficult for those who are not detained, please see below.

The New “Voluntary Returns Procedure”
Israel’s new procedures governing how officials should document an asylum seeker’s wish to return to his or her country of origin aim to justify unlawful pressure on detained asylum seekers – who by definition fear persecution in their home country – to return home.

Until recently, Israel had no formal procedure to handle cases in which Eritrean and Sudanese detainees said they wished to leave Israel. The attorney general announced that his office would develop a “voluntary returns procedure” after the media criticized the Israeli authorities following a case in early March, when an Eritrean detainee reportedly agreed to fly from Israel to Uganda, but was then forced to fly to Egypt. In Egypt, he decided to return to Eritrea rather than face renewed detention on return to Israel.

In a May 13 court hearing, the state attorney said that in the previous year, Israel had “voluntarily deported” 534 Sudanese nationals who had been in detention, and 1,500 who had not been detained,through a third country. UNHCR says that in addition to the group of 20 Eritreans who agreed to leave, on July 10 its staff spoke with seven Sudanese men, including some from Darfur, detained at the Ktsiot Detention Center who said they had agreed to return to Sudan because “they preferred to take a risk and not to stay indefinitely in prison” in Israel.

Expanding Detention of Asylum Seekers
Over the past few years, hundreds of the Eritreans reached Israel aftersurviving kidnapping in Sudan and Egypt and widespread torture by criminal gangs in Egypt’s Sinai desert. The majority of those in detention, including Sudanese nationals, entered Israel in or after June 2012 and were detained on arrival under Israel’s Anti-Infiltration Law, which allows the authorities to detain anyone irregularly entering Israel.

Israeli authorities have also used a September 2012 regulationto arrest and detain people under the Anti-Infiltration Law, mostly Eritrean and Sudanese nationals who have been living in Israel for several years.

The September 2012 regulation allows the authorities to detain and deport any “infiltrator” suspected of offenses “endangering national security or the public peace,” even without formal charges or convictions. Under the regulations, immigration officials may order the detention and deportation of three categories of people:

–          Those police are holding on suspicion of having committed an offense, but whom police intend to release “because there is not enough evidence to try [them] in court or due to lack of public interest” in prosecuting them;

–          Those suspected at any pointof having committed an offense and whose cases have been closed due to a lack of evidence or public interest and who were released before the 2012 regulations came into effect; and

–          Those convicted of any criminal offense who have served their sentences, whether before or after the 2012 regulations went into effect.

UNHCR officials in Israel and Israeli groups working with refugees say that many of those detained under the regulation were suspected of minor offenses, such as low-grade assault charges or possession of stolen goods such as mobile phones.

On July 1, Israel’s Population and Immigration Authority amended the 2012 regulations and expanded the definition of suspected offenses on the basis of which Israeli authorities can arrest and detain people in these categories. The amended regulations say that immigration officials may order the detention and deportation of someone to whom an offense is “attributed” that “causes real harm to the public order,” including “low-level property offenses (examples are cell phone and bicycle theft), offenses of forgery (including specifically the forgery of visas and permits), as well as offenses of violence (threats at the low level and regular assault offenses).”

On July 9, the Israeli daily Maarivreportedthat the Israeli authorities had arrested 500 “foreign nationals from Africa” under the September 2012 and the July 1 procedures and that an unnamed “senior official in the Immigration and Population Authority” had said the law allows the authorities “to detain foreign subjects in administrative detention until at least January 2015. In parallel we are allowing those who were arrested for light criminal offenses to be arrested and to leave the country.” The official added that he expected “the number [of detainees] will grow by hundreds [more] in the coming days.”

Pressure on Eritreans and Sudanese Not in Detention
About 50,000 other Eritrean and Sudanese nationals live in Tel Aviv and a few thousand live in other cities. Israel has informally suspended their deportation, but senior officials have repeatedly threatened to deport them without officially clarifying whether they would first be allowed to claim asylum. In early March, the Israeli media reported that the interior minister said he planned to detain all “infiltrators” – which Israeli law defines as anyone who irregularly enters Israel and which includes the 50,000 Eritreans and Sudanese – and to deport them to a still-to-be-identified third country.

On July 10, the Tel Aviv municipality closed down 10 unlicensed businesses belonging to “migrants,” the Ynet news website reported. A refugee activist who witnessed some of the closures told Human Rights Watch that it “was a humiliating process with officials with dogs and horses kicking out the owners and taking away their belongings in trucks.”