Petros: “The critical question is, when dictator Isaias passes away what will happen to Eritrea? Who takes over?  Eritrea has no Government structure and no institutions.  If something happens to him there is no vice-president who 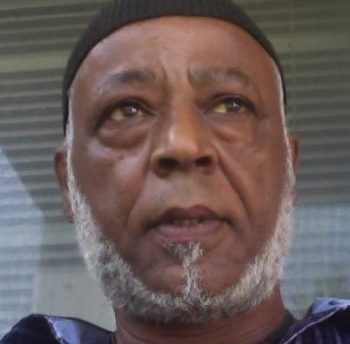 Petros: “The critical question is, when dictator Isaias passes away what will happen to Eritrea? Who takes over?  Eritrea has no Government structure and no institutions.  If something happens to him there is no vice-president who would take over immediately; no institutions to carry any form of transition.  There will be power vacuum, and it can only give rise for generals to compete for power. Such scenario may lead to armed clashes. Imagine armed clash in a country where the regime has forced civilians to take up arms. At the same time, the diaspora political and civic organizations will be caught unprepared, as they haven’t so far and will not be able to contribute towards smooth transition of power. But, it doesn’t have to be like that. They can   develop a common strategy to deal with the change. A major obstacle to developing a common strategy is that they are not yet united – united in their outlook. It needs unity to reach consensus to adopt a common strategy for transfer of power.”

Comment: No one can reach a destination without the right direction and riding the most efficient highway; and the more we delay the remedy, the stronger we leave the nation’s destiny for chaos. The location is dictatorship and the destination, secular democracy that cannot be reached without mass based Transitional Government of Eritrea capable of temporarily serving the society with its own constitution until power is transferred through fair national election with UN supervision. What common strategy could we have other than the most universal roadmap to secular democracy based on the history of dictatorial nations as ours? Why don’t we dispatch from this well tested neutral school of thought and spell it out? I challenge you to be specific brother Petros because you should have one in mind by now! What should the “COMMON STRAGY” be in your opinion?

To assess the objective reality of our current situation one intends to respectfully ignore EDA and Bayto from practical angle of life because they have been quiet and disconnected from the people for a very long time. We tried the best to support them energized by their promising start and they could have made it with a little help from honesty, clarity, justice, love and determination. The environment was really the closest we came to universally acceptable democratic formula because EDA as representative of the political parties and Bayto as that of the people could have easily generated the badly needed Transitional Government of Eritrea behind our people’s support. Unfortunately, they slept it out for many years to lose the momentum with the destructive interference that contradicted their specific roles in the society. We suffered heavy consequences as a result specially in terms the division within the civic society that would probably never have intensified as much. We lost thousands of lives, time, efficiency, energy, and mainly focus on achieving secular democracy through the proper roadmap. Today, Bayto could have had the capacity to either facilitate the formation of a neutral transitional government in full harmony with the political parties and nationalist groups and could even have been a legally mandated transitional government of Eritrea. And that loss of focus in my opinion allowed the intolerable conceptual difference between the civic groups that we have been experiencing ever since as a result. It diversified us in different directions out of the democratic axis that many other countries used to exist from the curse of dictatorship.

Although reliable observers say the opposition in Addis is in bad shape with nothing going on in favor of the Eritrean people, we still want them to be strong and get to the point by admitting and correcting their mistakes as soon as possible but we cannot permanently depend on their leadership for we have tried that for many years without success. The people should now walk in parallel exploring other means of solution strictly from universal point of view because our situation is universal. We are only Eritreans by identification but humans by nature that must deal with our socio-political problems based on how other similar societies did it; for there is no unique democracy called Eritrean. History says Ghana, Liberia, East Tumor and even Somalia (despite the terrible clan politics in the country) achieved democracy through the universally endorsed process of Transitional Government with slight difference in style (based on their situations) and UN supervised elections. I will briefly discuss them probably in PART III of this topic.

Hence, Eritrea’s social drama today revolves around the following POLITICAL MENU with diversified conceptual specifications after Bayto compromised the people’s FOCUS failing to manage their political business by the book.

1)  Visionless or anarchic political philosophy: People (individuals or in group) in this category oppose the regime for different reasons but have no effect in the struggle for democracy beyond TEKAWAMAY status. They are followers and potentially ready to be effective elements of change but they don’t have the capacity to understand how a society under dictatorship democratizes itself by the universal book. Nor do they have enough information about what has been going on in the opposition camp. They support anything against the regime and even work in organized fashion in some cases but with no defined conceptual direction to democracy except using the term as their political destination. They, therefore, need leadership from the civic society to learn and execute as the most important portion of the society. The damage control points a finger at the Civic Society as responsible for this crisis because of incapacity to adapt the best method of achieving democracy and educate our people about it.

2)  The silent majority: People in this category may despise the regime but silently watch the drama from distance. Some may have fear of losing interest in the country that stops them from messing with the regime and some accuse the weak opposition camp as the reason for their silence. In my opinion, they are neither part of the problem nor the solution compared to the conceptual mess in the relatively organized Civic Society.

3)  Existentialist political philosophy: The philosophy to my understanding departs from the notion [my words] that ‘the society is in disintegration state of being, thus in existential crisis and the immediate solution is external intervention that should precede democratizing it by any form of the process. Essence (democracy) should wait until the nation guarantees its existence and the civic society should direct its focus to this direction before it gets late.’ Is not the society existing like other societies on planet earth? Wouldn’t external interference compromise the nation’s existence by default logic? Are not the people still existing in different conditions around the world? Are Eritreans really in the verge of extinction for them to look for any form of external solution? In my opinion, this school of thought is too exaggerated to depend on and fails to clearly see the eventual consequence of its application on the people and their independent nationhood, needless to say they continue to exist as a society from an independent nation. We simply need ourselves to transit to democracy and we can do it without external assistance needless to say the anticipated external forces in the project are facing many problems themselves.

4)  Armed struggle: Some Eritreans in this category claim of fighting to overthrow the enemy inside Eritrea and to eventually democratizing it after success. I am not sure how many groups exist in this category but SEMUR DIMOCRACIAWI GINBAR is at least one of them, although I don’t know its relationship with the Medrekites considering the EPLF affiliated elements in its leadership. I don’t think the group has a roadmap to democracy at this point in time but may flirt with the idea of producing it after replacing the dictatorship. The idea would be great had the people’s objective been to replace the dictatorship with anything but we need to ask which societies in Africa or else made it to democracy with only this political approach, how different it is going to be in the case of Eritrea and why; considering the outcome of this method has always been dictatorship?

5)  National Question: The right of a nation to self determination and up to secession: This political philosophy may still be entertained by our minority groups but only in the condition Eritreans fail to produce SECULAR DEMOCRACY after the dictatorship. Our Kunama sect in particular is the front runner in this regard declaring that ‘the Isaias regime is a SECULAR DICTATORSHIP that indiscriminately attacks all ethnic and religious groups of the society and the solution cannot be other than SECULAR DEMOCRACY’ and I agree. They have no problem modifying their words in exclusive favor of united Eritrea in this condition. I see this as a positive and very important check and balance factorial in general. I respect the opinion and accept their condition of unity from their practical experience. It is an inductive energy to the struggle of the people for unity only through genuine secular democracy, a clear reminder of the consequence otherwise.

6)  Ethnic/Religious political philosophy: People in this category want to mix religion or ethnicity with politics. Some want the society to execute religious laws in the justice system, which would necessitate it to practice two constitutions based on religion. Quiet a few want to be a separate ethnic group within their authentic ethnic group because of religion. And few extremists in the other side of the fence go beyond looking to form a Tigrigna Speaking Geez Christian nation called Agazi. They call themselves ORITAWIAN, probably because it sounds too beautiful to be qualified for meaningful socio-political philosophy; empty otherwise. Instead of boozing or smoking a joint to pacify their resentment they amplify it with “entaidea kingebir mefthi siinalu, chenikuna equaiyumber fetina aiconnan” thought entertainment.

In conclusion, the opposition camp has no capacity to answer the questions of the people from different angles of the society because it is not a government. The only thing we can do is settling for a universal solution to our fundamental problem and democratize the country first and fairly, rationally, academically and universally deal with all our concerns in transparent environment. For this to take place, we should set our personal issues (religious and ethnic) aside and work for the most appropriate global solution that satisfies all of us as a common denominator which can only be mass based strategy for Transitional Government of Eritrea.