BRUSSELS: The EU's top court rules on Wednesday (Sep 4) on the legality of a controversial quota scheme that Brussels launched two years ago to force member states to admit thousands of asylum seekers.The European 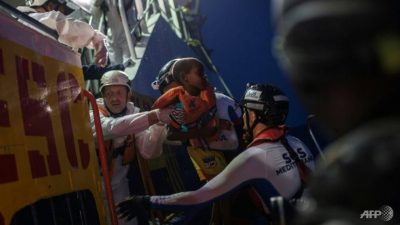 It also took legal action against the Czech Republic for having stopped taking them but spared Slovakia which agreed to take a handful of them.

Although it voted for it, Poland has come out strongly against the plan since a right-wing government came to power.

The EU action – which would be bolstered by a favourable ruling in Luxembourg – could see the three countries referred to the Court of Justice and given stiff financial penalties.

Other EU member states have dragged their feet despite having voted for the plan.

In June, Filippo Grandi, the UN’s High Commissioner for Refugees, called the relocation plan a “disappointment” where only a handful of countries on a wealthy continent were fulfilling their duty to asylum seekers.

He singled out Greece, Italy, Germany, Sweden and Austria.

European sources have blamed the delays on governments trying to screen militants in the wake of terror attacks, a lack of housing and education for asylum seekers, and logistical problems.

With the relocation scheme struggling to lift off, many Syrians and others in Greece and Italy have travelled with smugglers to wealthier northern countries like Germany and Sweden.

Brussels launched the relocation scheme in September 2015, the year more than one million migrants arrived in Europe by sea.

It was introduced as an exception to so-called Dublin rules under which migrants must apply for asylum in the member state where they first land.

Under international and European law, countries are required to grant asylum to people fleeing war or persecution but not those classed as economic migrants.

Political pressures have eased since March last year when the EU signed a deal with Turkey to send back migrants in return for billions of euros in aid and for admitting asylum seekers directly from refugee camps in Turkey.

The controversial deal sharply cut the flow across the Aegean Sea to Greece, which had been the main point of entry to Europe.

Other routes have since seen a resurgence in migrants, including via Libya to Italy as well as Morocco to Spain. The EU deems most people coming from sub-Saharan Africa as economic migrants.