THE EUROPEAN Union (EU) is brokering a secret deal with a suspected war criminal in a desperate bid to stop more migrants from Africa arriving on European shores. By SELINA SYKES European diplomats, led by Germany, have 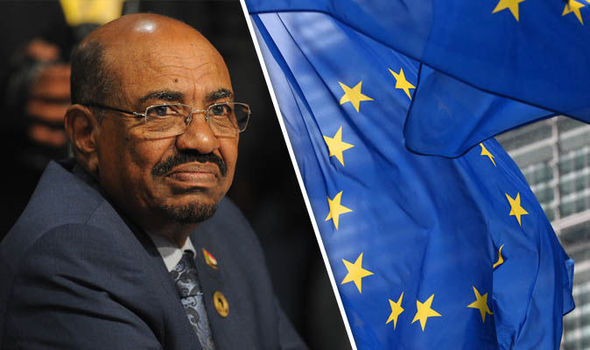 THE EUROPEAN Union (EU) is brokering a secret deal with a suspected war criminal in a desperate bid to stop more migrants from Africa arriving on European shores.

European diplomats, led by Germany, have reportedly been discussing plans to work with dictatorships around the Horn of Africa – the easternmost extension of the continent home to Djibouti, Eritrea, Ethiopia, and Somalia – in order to stop the flow of migrants to Europe.

Minutes taking during EU meetings in March obtained by German newspaper Spiegel reportedly provide the first concrete plan for £40million to be handed out to eight African countries over three years.

The border protection project will also provide equipment to the countries in question.

The EU’s multimillion action plan for the troubled area of Africa will give emergency funding to eight countries – including conflict-ridden Sudan.

Sudan is part of a key route for refugees from Eritrea, Somalia, the Democratic Republic of Congo and the Central African Republic who then head to Libya to take boats to Europe.

Sudan’s president Omar al-Bashir, who seized power in the midst of a 21-year-year civil war, is accused of organising war crimes and crimes against humanity.

The US also accuses Sudan of providing financial support to terrorists.

Documents relating to the EU project in Africa suggests Europe wants to send cameras, scanners and servers for registering refugees to the Sudanese regime in addition to training their border police and assisting with the contribution of two camps and detention rooms.

Concern over how the equipment could be used has already been expressed within the EU.

The “risks” listed in the action plan highlights equipment funded by the EU’s Emergency Trust Fund could be abused by repressive regimes in the oppression of the civilian population.

There are also concerns about to what extent al-Bashir is prepared to take action against people smugglers, with the Human Rights Watch claiming the Sudanese regime works with criminal networks.

A report by the human rights group accused the police and military of selling refugees to human traffickers.

The German Ministry for Economic Cooperation and Development has confirmed that action plan is binding, although no concrete decisions have yet been made regarding its implementation.

Marina Peter, an expert on the Horn of Africa region, said: “A regime that destabilised the region and drove hundreds of thousands of people to flee is now supposed to stem the refugee problem for the EU.”