Ethiopia rejects Egypt’s request to include WB in GERD talks

CAIRO - 21 January 2018: Ethiopian Prime Minister Hailemariam Desalegn asserted on Sunday, a day after finishing his official visit to Cairo, that Ethiopia will not accept Egypt's request to include the World Bank in 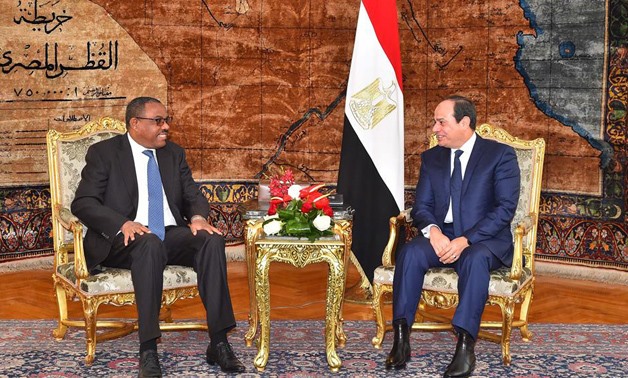 CAIRO – 21 January 2018: Ethiopian Prime Minister Hailemariam Desalegn asserted on Sunday, a day after finishing his official visit to Cairo, that Ethiopia will not accept Egypt’s request to include the World Bank in the tripartite technical committee’s talks on the Grand Ethiopian Renaissance Dam (GERD), according to the Ethiopian News Agency (ENA).

Desalegn said that Ethiopia will not accept any arbitration by a third party on the GERD issue as there is an opportunity for the three countries to resolve possible disputes by themselves.

Desalegn said “Seeking professional support is one thing; transferring it to an institution is another thing. So we told them that this is not acceptable from our side.”

He added that it is not necessary to include a third party in the negotiations because “it is possible to reach agreement, if negotiations are underway through cooperation and with the spirit of trust.” Egyptian officials are not yet available to comment.

“Based on our recognition of the importance of the continuity of the technical studies of GERD, Egypt is suggesting the participation of the World Bank at the tripartite discussions on GERD as a neutral [actor],” President Abdel Fatah al-Sisi has earlier stated.

On January 8, Egypt’s Foreign Minister Sameh Shoukry stated that Egypt has not received any official response from either Sudan or Ethiopia to its suggestion.

The Ethiopian President’s rejection of Sisi’s suggestion came after his official visit to Cairo in which he assured in a joint conference with Egypt that “[GERD] will not cause any harm to Egypt’s entity and its people,”guaranteeing that the Nile River will continue to flow between the two countries.

Desalegn stated that the Renaissance Dam, 70 percent of which is completed, “will not affect Egypt negatively and that the dam represents a development factor for both countries,” adding that “we will not cause any harm to Egypt and its people.”

“We will never cause any harm to Egypt, we will do our best to guarantee a decent life to the sons of the Nile River, my country is ready to put an end to all the problems between the two countries,” Desalegn stated.

According to ENA, Desalegn noted that there is a gap in the information regarding the GERD project on the Egyptian side, and emphasized the need to continue asserting the reality that Ethiopia’s development endeavors and the dam will not affect Egypt’slivelihood.

“Egyptians are not receiving genuine information about the source of Nile waters and the Grand Ethiopian Renaissance Dam,” he said. In this regard, successful work has been done during the visit to explain everything to the Egyptian people and the world, he added.

During the Egypt – Ethiopia joint press conference, Sisi expressed “concerns” over the lack of progress in the negotiations of the construction of GERD; Sisi explained that Egypt has never had any problems with the developmental goals of the Nile Basin states, as long as they do not harm Egypt’s interests.

Sisi said that he appreciated Ethiopia’s repeated assurances that the dam would not have a negative impact on Egypt. However, the required technical studies set as a condition to determine the dam’s operational mechanism before filling the reservoir, according to the Declaration of Principles signed in 2015 between the three states (Egypt, Ethiopia and Sudan), must be completed and all sides should abide by their findings.

The president also stressed that GERD should neither harm Egypt’s interests nor its share of Nile water in light of the brotherly relations between Egypt and Ethiopia. He said co-operation among the Nile Basin countries must not be a “zero-sum game.”

Talking to ENA, Desalegn also stated the trip was a success which enhanced consensus between the leaders and further improved the relationship between the two countries.

Egypt and Ethiopia asserted the depth of the Egyptian-Ethiopian ties by signing a number of Memoranda of Understanding (MoUs) on Thursday at Al-Ittihadia Presidential Palace on Thursday, which aim to boost the bilateral relations.

The two sides agreed to increase the economic cooperation between them in light of Egypt’s keenness to increase its investments in the Ethiopian market, and to establish an Egyptian industrial zone in Ethiopia.

Ethiopian Prime Minister Desalegn arrived in Cairo on Wednesday accompanied by a high-profile delegation to attend the sixth meeting of the joint Egyptian-Ethiopian Higher Committee. The last meeting was held three years ago and tackled bilateral cooperation in several fields, including education, health, agriculture and fisheries.

Desalegn’s three-day visit came within the framework of the joint Egyptian-Ethiopian Committee, which had been postponed several times since December.

Since May 2011, Cairo voiced its concern over how the dam could reduce the country’s annual share of more than 56 billion cubic meters of Nile water. Egypt’s average water per-capita is expected to drop from 663 cubic meters per year to 582 cubic meters by 2025, according to the Central Agency for Public Mobilization and Statistics (CAPMAS). However, Addis Ababa claimed that the dam is necessary for Ethiopia’s development and will not harm downstream countries.