The Prime Minister of Ethiopia, Hailemariam Desalegn, has resigned amid deadly anti-government protests, state TV reports. In a televised address, he said his resignation was "vital in the bid to carry out reforms that would lead 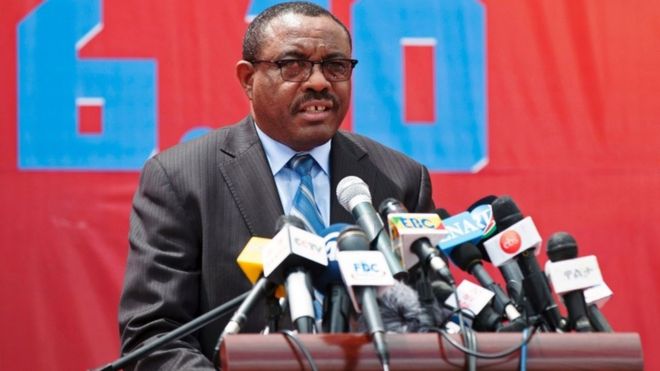 In a televised address, he said his resignation was “vital in the bid to carry out reforms that would lead to sustainable peace and democracy”.

Mr Hailemariam, who has led the country since 2012, also stepped down as chairman of the ruling coalition.

His departure follows a national state of emergency that ended last year.

In the latest violence, 10 people were killed and dozens more injured following an opposition protest.

The BBC’s Emmanuel Igunza, in the capital Addis Ababa, says the government has released thousands of opposition supporters from jail, but the protests have continued.

The country has witnessed repeated violent clashes since 2015, with protesters calling for political and economic reform, and an end to state corruption.

The ongoing disturbances have led to deep divisions in the governing coalition, says Mary Harper, Africa Editor for the BBC World Service.

Some of Ethiopia’s powerful elites have come to see the prime minister as weak and lacking in direction, she says.

A weak and turbulent Ethiopia is risky for the entire Horn of Africa, our correspondent adds, as this normally stable state is seen as key to holding the region together.

Mr Hailemariam said he will stay on as a caretaker prime minister until Ethiopia’s parliament and ruling coalition accept his resignation and choose a replacement.