Eritrea’s president says no fear of unrest after army mutiny

By Aaron Maasho (Reuters) - Eritrea's President Isaias Afewerki sought on Monday to calm fears of unrest, and in his first reaction to the storming of the information ministry ago by dissident troops three weeks, 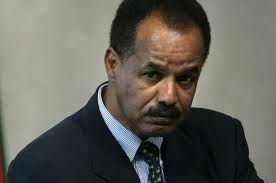 By Aaron Maasho
(Reuters) – Eritrea’s President Isaias Afewerki sought on Monday to calm fears of unrest, and in his first reaction to the storming of the information ministry ago by dissident troops three weeks, blamed “bankrupt enemies” for being behind the attack.
Eritrean soldiers, backed by tanks, took over the ministry on January 21 and obliged the director general of state television to appeal for all political prisoners to be freed.
Calm soon returned in the capital, but Eritrean opposition activists in neighbouring Ethiopia say there is growing dissent within the army, Africa’s second biggest, over economic hardship.
The incident sparked protests by exiled Eritreans in Europe, who briefly occupied embassies in London, Rome and other cities last month to express support for the mutinous soldiers.
Isaias said his administration had chosen to remain silent to avoid “serving the ploys of bankrupt enemy quarters”.
“Entertain no worry at all, as there was, and does not exist, any reason for being apprehensive,” the information ministry website quoted him as saying on Monday.
Isaias did not disclose who was behind the plot, but said details would be provided “at an appropriate time”.
Eritrea has been led by Isaias, 66, for two decades. Although the renegade soldiers did not go as far as to demand his overthrow, the protest was a rare glimpse of public discontent in one of Africa’s most secretive states.
The fate of the dissident soldiers is not known and statements about the political situation inside Eritrea are hard to corroborate. But dissent inside the one-party state is typically dealt with harshly.
Between 5,000 and 10,000 political prisoners are held in the country of 6 million people, the United Nations human rights chief said last year, accusing Eritrea of torture and summary executions.
More than 1,000 Eritreans cross over to Ethiopia and a similar number go to Sudan each month to escape conscription and unlimited service in the army, according to figures from the U.N. refugee agency.
On a strategic strip of mountainous land along the Red Sea, Eritrea has more soldiers per person than any country except North Korea.
(Editing by James Macharia and Jon Hemming)