Eritrea’s military received help from the United Arab Emirates and possibly Russian, Czech and Italian companies in the past year, assistance that would violate a United Nations arms embargo on the Horn of Africa country, 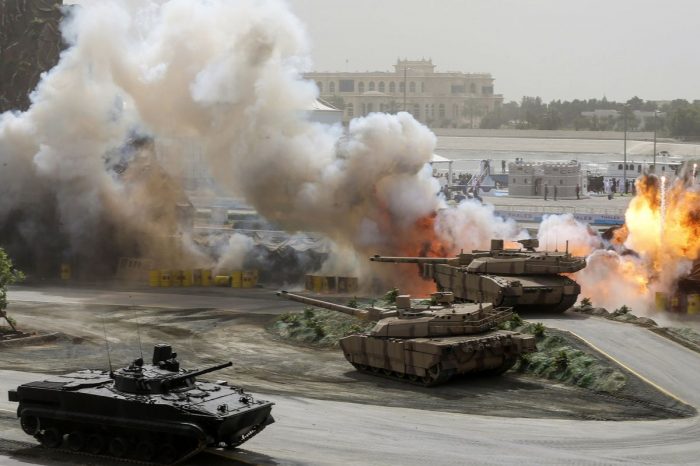 Eritrea’s military received help from the United Arab Emirates and possibly Russian, Czech and Italian companies in the past year, assistance that would violate a United Nations arms embargo on the Horn of Africa country, the organization’s investigators said.

Thirteen Eritrean air force and navy cadets received training at U.A.E. military colleges and seven at Emirati engineering institutions between 2012 and 2015, the investigators said in a Nov. 8 report to the UN Security Council, citing testimony from five cadets who defected. The U.A.E. has been building a military base in Eritrea, whose port facilities two months ago appeared to be “almost complete with multiple vessels docked,” the investigators said, citing satellite imagery.

U.A.E. tanks and artillery have been present between the port facilities and an airport that is also being developed, the investigators said. A U.A.E. Foreign Ministry official didn’t immediately respond to a request for comment. Eritrean Information Minister Yemane Gebremeskel didn’t comment directly on the allegations.

Eritrea, a one-party state that sits on a key shipping strait linking the Red Sea and Suez Canal, has been under UN sanctions since 2009, following allegations President Isaias Afwerki’s government supports Al-Qaeda-linked rebels in Somalia. UN monitors said two years ago that the Saudi Arabia-led coalition fighting in Yemen may have been offering Eritrea monetary compensation for the use of its land, airspace and territorial waters.

In an emailed response to Bloomberg’s questions, Information Minister Gebremeskel criticized “unwarranted sanctions” based on “false allegations” it supported the al-Shabaab militant group. UN investigators said they found no conclusive evidence of support given to the fighters nor of large shipments of weapons and ammunition between the two countries.

The investigators also said Russia’s permanent mission to the UN told them the St. Petersburg Aviation Repair Co. overhauled a Mi-17 helicopter that was transported from St. Petersburg to the Ministry of Transport and Communications in Eritrea’s capital, Asmara. Satellite imagery later appeared to show the aircraft at various military sites in the country, the UN experts said.

Defectors told them all helicopters operated by Eritrea’s government are used by the national air force, although not necessarily exclusively. The repair company didn’t immediately respond to an email seeking comment.

Two Eritrean Augusta Bell AB 412 EP helicopters were overhauled over the past two years by Italian helicopter service company Airgreen S.R.L., the experts said. Airgreen, which didn’t immediately respond to an email seeking comment, told the UN it was given documentation indicating the helicopters’ registration was issued by the Eritrean Civil Aviation Authority. Satellite imagery later showed the two helicopters parked on a military apron adjacent to an Eritrean airport base, according to the report.

Czech Republic-based Zlin Avion Service s.r.o. supplied parts and training to members of the Eritrean air force, which has at least four Zlin aircraft, the experts said, citing certificates bearing the Zlin Avion logo and the signature of a flight instructor who was in Asmara in May 2016, as well as eyewitnesses.

The company didn’t immediately respond to an email seeking comment. It told the UN investigators it hadn’t entered into any contractual agreement with Eritrea’s government and that its employees hadn’t been present in the country.

— With assistance by Claudia Maedler