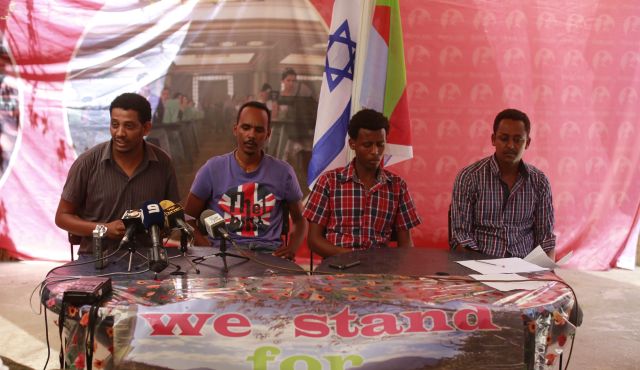 Representatives of the Eritrean community in Israel on Sunday accused Israel of crossing a “red line” after the so-called “voluntary deportation” of 14 Eritreans two weeks ago. They were sent back to their homeland from the Saharonim detention facility, where they had been detained. One of the expelled men has reportedly been tortured since arriving back in Eritrea.

At the first press conference of its kind, convened in south Tel Aviv’s Shapira neighborhood, community spokespersons decried the procedure, recently approved by Attorney General Yehuda Weinstein. Davit Damuz said the Israeli government is endangering the lives of those expelled to Eritrea.

Representatives sent a letter in a similar vein on Sunday to Prime Minister Benjamin Netanyahu.

Habtum Mehari presented evidence of the fate of the returnees to Eritrea: The brother of one of the expellees said that the connection with him had been cut. “His family tried to check with the authorities as to what happened to him after he landed at Asmara airport, the Eritrean capital. Eritrean army sources told the family that he is imprisoned in a detention facility in the south of the country and is being seriously tortured,” he said. “We have additional details. Unfortunately, I can’t tell you more than that because it’s dangerous for the man and his family.”

Mehari said that community representatives in Israel spoke to one of the 14 Eritreans who returned home two weeks ago as a “voluntary returnee.”

The Eritrean ambassador to Israel, Tesfamariam Tekeste, accompanied the flight. “The ambassador told them during the flight, ‘We’ll give you four months of quiet and then we’ll take you back to the army and it will be hard for you there.’ Although the expellees were afraid to give us information over the phone, one of them said that the government is closely observing and keeping track of all of them.” He added that this behavior is typical of the Eritrean government: “They create a number of positive cases in order to overturn other negative reports.”

Mehari told of additional cases in which Eritreans who had fled from their country were sent back by the Egyptian and Sudanese governments. “Submitting a request for asylum in a country outside Eritrea is considered an act of treason by the Eritrean government, so anyone returned to Eritrea is considered a traitor and is harshly treated,” he said, criticizing the policy of the Israeli government. “In the past decade there has been almost no expulsions to Eritrea, especially not from developed and democratic countries. In most Western countries – in Europe and the United States – they are aware of the fact that it’s impossible to expel Eritreans to their [old] country. Israel is unable to understand that.”

“Journalists and political activists are arrested and imprisoned,” Damuz added. “The families don’t know where the people are taken and whether they will return some day. Every person in Eritrea has to be conscripted without knowing [when they] will be discharged. In the army, soldiers are slaves of the government. If a male or female soldier talks or asks questions, he or she is taken to prison.”

Damuz asked to send a message to the Israeli public, particularly to the residents of south Tel Aviv: “We didn’t come to Israel in order to harm you or destroy your home; we aren’t your enemies. We hear the cry and the pain of the residents here – in the Shapira neighborhood, the Hatikva neighborhood and Neve Sha’anan. We see the situation here. We aren’t blind. It’s important to us that you know – this difficult situation isn’t our fault. We all came to south Tel Aviv after being released from [the detention center] without anything – without a work permit and anything.

The law determines that the migrants can be arrested based on the crime of entering Israeli without a permit. An additional procedure, “for handling infiltrators involved in a criminal proceeding,” allows for the imprisonment of African migrants suspected of committing a crime, based on administrative evidence only, even if it is insufficient for a criminal trial.