Israel accused of coercing Eritrean refugees to ‘volunteer’ for deportation

Local UN official, NGO claim Israel tells Eritrean nationals that they can either go back to home, where their lives would be in danger, or remain in jail. Eritrean refugees imprisoned in Israel are being coerced 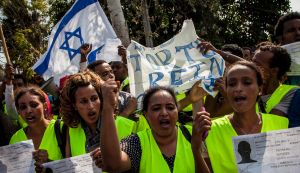 Local UN official, NGO claim Israel tells Eritrean nationals that they can either go back to home, where their lives would be in danger, or remain in jail.

Eritrean refugees imprisoned in Israel are being coerced into signing “voluntary” departure forms to return to Eritrea – where the UN says their lives would be in danger – or go to another country, according to the UN refugee agency here and the Hotline for Migrant Workers.

Local UN officials say the Eritreans are denied their right to seek asylum. They are being told they can either go back home or stay locked up in Israel for at least three years.

A group of Eritrean nationals is expected to be flown soon either to Eritrea or to another country willing to receive them, say officials who visited the prison near Kibbutz Mishmarot where they are being held. Israel has not confirmed this.

If the reports are true, this will be the first time Eritreans are returned at Israel’s initiative to their country, which the UN High Commissioner for Refugees has classified as a totalitarian state that severely violates human rights. The Eritrean government imprisons and tortures dissenters, drafts men into the army for decades, and has shut down human rights and non-governmental organizations.

Israel grants Eritreans group protection due to the situation in their country, although it does not recognize them as refugees. Israel does not deport the Eritreans because it has signed the United Nations Convention Relating to the Status of Refugees.

Despite the UN’s position and Israel’s policy not to deport Eritreans, Israel maintains diplomatic relations with Eritrea and an Eritrean ambassador is stationed here.

A group of Eritreans who recently left the prison for one day reportedly said on their return that they had met the Eritrean ambassador in Israel. The Eritrean embassy refused to comment on the “voluntary return” scheme.

Foreign Ministry officials said there was “no legal obstacle to a person’s voluntary return to his country, if he wants to do so.”

According to the Population Registrar, Eritreans comprise more than 60 percent of the people who have entered Israel illegally.

Sharon Harel, a senior UNHCR official, told Haaretz the UNHCR’s main fear is that many Eritreans are not given the option to ask for asylum.

Until last June, Eritrean and North Sudanese nationals who entered Israel were released from prison. Since then the law has been amended to enable the authorities to incarcerate African migrants and refugees for three years or more.

“We are concerned that people who fear persecution if they return to their homeland want to ask for asylum are not permitted to do so,” she says.

“In practice, they are not given an option for asylum. On the other hand, the people are held in prison, while the immigration officials offer them either to ‘leave voluntarily’ or remain at least three years in prison,” she says.

“People call us alarmed over the very idea of returning to Eritrea. They have no hope of being released, they don’t know [asylum] is an option at all, or that if they applied and it wasn’t considered they are entitled to be released,” she says.

Gabriel Tatela of Hotline for Migrant Workers recently visited the prison. “Officials told the people they have two possibilities – either to sign a ‘voluntary return’ or stay in prison at least three years,” he says.

He said one Eritrean prisoner told him, “‘Today they called me and gave me a handwritten form in Tigrinya [Eritrea’s predominant language], saying ‘I came from Eritrea to Israel illegally and now I want to go to Uganda of my own free will. I ask the Eritrean embassy to issue me a passport and all the required documents.’ They asked me to sign it and wanted to videotape me.”

MK Dov Khenin (Hadash ) sent the head of the Population and Immigration Authority an urgent request to stop the deportation back to Eritrea and to stop signing the refugees on the return documents.

“Returning asylum seekers to Eritrea is a clear and blatant violation of the ‘no return’ principle in the Refugee Rights Convention,” he wrote.

Attorney Reut Michaeli of the Hotline for Migrant Workers said “the fact that Israel prevents refugees from applying for asylum shows how obtuse we’ve become. Sending people in this situation back to their country means deportation – deportation to where their lives are in danger. There’s nothing voluntary about that.”

Neither the immigration authority nor the Justice Ministry reacted to the accusations.