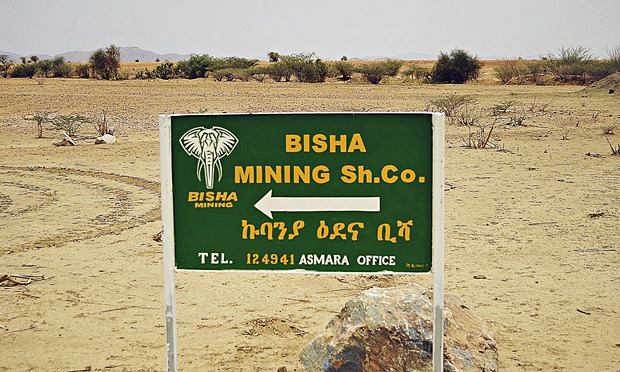 Three Eritrean refugees have filed a lawsuit against a Canadian mining firm over claims that it conspired with the Eritrean government to force them and other conscripted workers to work at a copper mine for long hours while receiving little pay and living in squalid conditions.

The men, who now live in an Ethiopian refugee camp, say they were conscripted into the Eritrean army before being made to work “unfairly long hours without enough salary, proper medical services, good shelter [or] enough food”. They worked for the Bisha Mining Share Company (BMSC), which is operated jointly by Vancouver-based Nevsun Resources and Segen Construction, an Eritrean state-owned contractor.

Eritrea’s harsh national service programme, which requires all citizens over the age of 18 to enlist in the military or work for state-run companies, was linked to the exploitation of workers in the country’s mining sector in a 2013 report by Human Rights Watch (HRW). The Eritrean government holds a 40% stake in Bisha mine (pdf).

One of the refugees involved in the lawsuit, Gize Yebeyo Araya, said through his lawyers that he worked at Bisha until March 2011. He said Segen paid him less than 500 nakfa (£20) a month to dispose of dangerous chemicals, including sulphur, that were generated during the mining process. “[My] work consisted of laying a large plastic sheet on the ground to hold the toxic chemical waste,” he said. “The heat was extreme when working. I got serious burns from the sun. I still have the scars from some of these burns on my face. Because of these conditions, and because of how little we were fed, I was always weak and exhausted.”

Foreign mining firms eyeing Eritrea’s mineral reserves are in danger of “walking into a minefield of human rights problems”, the HRW report said. Nearly the entire workforce is enrolled in the country’s national service programme.

At Bisha, Gize said workers were separated from foreign staff at the mine. “We were constantly being watched by security personnel and were strictly ordered by our commanders not to tell anyone that we were conscripts.”

In response to HRW’s report, Nevsun commissioned an independent report (pdf) into working conditions at Bisha. “Since 2009, BMSC has implemented screening procedures and dialogue with the management of its main suppliers, contractors and subcontractors to implement the prohibition against using national service programme workers at the Bisha mine,” the report said.

Nevsun’s CEO, Cliff Davis, said: “We are confident that the allegations [in the lawsuit] are unfounded. Based on various company-led and third party audits, the Bisha mine has adhered at all times to international standards of governance, workplace conditions, and health and safety. We are committed to ensuring that the Bisha mine is managed in a safe and responsible manner that respects the interests of the local communities, workers, national governance, stakeholders, and the natural environment.”

Despite the denials that conscripted labour is used at Bisha, Gize said it was “openly known” that Eritrean staff at the mine were soldiers. The Canadian company should have insisted on better working conditions for local workers, Gize said. “Nevsun … could have given us protection from such exploitation, but it never did. It is due to this reason that I felt I needed to sue Nevsun.”

Canada-based lawyer Joe Fiorante, who is representing the Eritreans, said: “We assert that Nevsun should be held accountable for the tremendous harm suffered not just by the plaintiffs but all those coerced by its local contractor into working at the Bisha mine site.”

Nevsun’s refusal to acknowledge the use of conscripted labour at Bisha casts doubts on the legitimacy of its efforts to have a positive impact on the country, said Chris Albin-Lackey, author of HRW’s report. “Nevsun claims to have put new systems in place that will prevent any future use of forced labour at its mine site. It will be hard to take any of that very seriously if the company reacts to this lawsuit by insisting that the problem never existed to begin with.”

In the first case of its kind, another Canadian mining firm, Hudbay Minerals, is facing legal action in an Ontario court (pdf) over claims that widespread human rights abuses were carried out at its mine in Guatemala. Hudbay responded to the allegations saying they were without merit and detailing its former operations in the Central American country. Yet the case could set a legal precedent that holds Canadian companies accountable for human rights abuses carried out at their overseas mines, according to Renu Mandhane, director of the University of Toronto’s international human rights programme.

“That is a very significant finding and bodes well for the plaintiffs in this action [against Nevsun],” said Mandhane. “I do think that Canadian courts are going to see more and more of these types of cases if the government does not begin to regulate our companies more closely.”