Officials make it difficult for them to obtain legal status, which affects their chances of work. Jimmy left home for South Africa a decade ago because of the fear and abuse he suffered in Eritrea’s compulsory 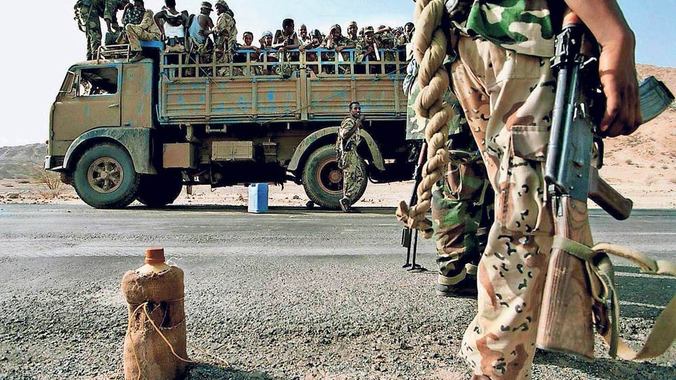 Officials make it difficult for them to obtain legal status, which affects their chances of work.

Jimmy left home for South Africa a decade ago because of the fear and abuse he suffered in Eritrea’s compulsory national service. He is part of a generation that has been required to work for the state indefinitely at a pay so low that their parents have to subsidise them.

National service was extended indefinitely after a border war with Ethiopia from 1998 to 2000. Any sign of resistance or dissatisfaction with national service is met with swift retribution.

“Whenever you ask questions, the next day you’re gone,” he says during an hour-long interview at a café in Cape Town’s Greenmarket Square.

He says he has explained this repeatedly to South African immigration officials but, after 10 years, his status is still “asylum pending”.

The uncertainty makes it difficult to hold down a job, as do the three-or four-day absences every six months when he has to renew his temporary permit. The best he can find is a job as a waiter in a small restaurant.

Meanwhile, life has been difficult. In 2008, during an outbreak of xenophobic violence, he was assaulted by three men as he walked through Green Point on his way home from work. One stabbed him in the leg before pressing a knife into his back, while the others took his wallet, his identification and his money. They shouted insults at him for being a foreigner and told him to leave the country.

He says he often thinks about leaving. The most viable option is to pay smugglers to go through South and Central America to the United States, but the costs are prohibitive – as much as $30 000.

Another Eritrean, Jamal, whose father was a life-long liberation fighter who died in the border war in 1999, says he was arrested in his home country after he offered food and washing powder to elderly prisoners, jailed because their children had fled the country and unable to pay exorbitant fines.

“Why are you doing this?” the jailers asked.

“These are families who served their country,” he responded. “This is my turn to help them.”

It was personal for Jamal, part of being a good neighbour, as others had been for his family when his father was killed. For him, it was not a political act.

But the security people didn’t see it that way and they made him sign a paper promising “never to do it again”. He left them questioning the legitimacy of the regime and its repressive rule.

He was imprisoned a second time when he was doing his national service as a rural elementary school teacher – he had refused to turn over a class list to officials who wanted to identify pupils older than 18 to be taken out of school for national service.

Children of poor farmers often attend school part-time so they can help with planting and harvesting. Many are 18, 19 or 20 before they finish school. They had a right to an education, too, he says.

Jamal fled in 2008; his status in South Africa is also “pending”.

Typical stories
Jamal’s and Jimmy’s stories are typical of many Eritreans who fled political or religious persecution, forced labour and arbitrary imprisonment over the past 15 years, only to find themselves the targets of anger and hate merely for being foreigners. Many are confused by this because they expected a different reception.

When pressed, most voice a wish to return home, but only when conditions change. But their options are limited.

Semere was born in Ethiopia and only saw Eritrea for the first time in 1997. A year later, when war broke out, he was called up for military service. Four years later, when he tried to leave, he was thrown into prison without a trial or a chance to contact his family. He escaped to Sudan after six months and made his way to South Africa.

“I knew no one here,” he says during an interview in a noisy café in a Johannesburg mall. “I heard it was better than Sudan, a little bit far but safe. Also, there was freedom.”

But the small tuck shop he opened in 2007 was burnt down a year and a half later during a spate of xenophobic attacks. He rebuilt it, but gangsters looted it in 2013, while shouting anti-foreigner slogans.

Now he struggles as a street vendor and has given up on trying to get asylum. He has not been back to the immigration authorities for almost three years, leaving him without a valid residence permit, and afraid of imprisonment or, worse, deportation.

Semere is active in the main Eritrean opposition group in South Africa, the Eritrean Movement for Democracy and Human Rights, and he says that, if the government in Eritrea changes, he will go back. This is as far as he can see into the future.

Ruth, whom I met in Pretoria, says she did everything her government asked her to do, except renounce her faith. She spent eight years in the army and the civil police before being released in 2005 after marrying and having a child.

But when authorities found out her husband was a Pentecostal pastor, whose faith had been banned in 2002, they arrested him and came for her. Members of the national security service ransacked her home, taking books, a laptop and family photographs, but they did not find her.

Six years later she left with her daughter for South Africa.

“It’s also bad here – no job, no support system. Being a single mother, raising my daughter, it’s really tough. But at least there’s the freedom to practise my faith.” She doesn’t want to go anywhere else while waiting for her husband’s release. He was sentenced to 14 years in jail.

Some success
Not all the refugees have met with frustration and disappointment, however. Some, mainly those who came as students in 2000 and 2001, have carved out a place for themselves, and have used their success and status to help those who followed. Bereket, who runs a Greenmarket Square café, is a case in point.

Born and raised in the Eritrean capital, Asmara, he dropped out of a programme in advanced mathematics at a post-secondary institution in Ethiopia in early 1991 to join the Eritrean People’s Liberation Front during its final push for independence from Ethiopia.

Afterwards, he enrolled at the re-opened University of Asmara and was set to graduate in 1998 when war broke out again. And again he dropped out to serve, working as an auditor for the army.

But he frequently argued with commanders and questioned what he took to be poor decisions, and it was not long before he paid the price – reassignment to do reconnaissance alone and in front of the trenches, an almost certain suicide mission. Instead, he left – not the country, just his post.

Bereket then offered himself to the ministry of marine resources that was piloting several innovative development schemes and environmental preservation projects. But when the minister, the liberation war hero Petros Solomon, was arrested in September 2001 during a sweeping crackdown on dissent, it was the final straw and Bereket, too, began to look for a way out.

The opportunity came when he learned that his high grade average at the university qualified him for a World Bank-sponsored scholarship to South Africa. He left that November. Soon after, his wife Feven and their two children joined him at the University of Stellenbosch.

The next two years were a shock for being so normal. “Stellenbosch was very good for us,” says Bereket.

A local church offered support to the families of foreign students, and they made friends quickly. Church members organised weekly outings for foreign students’ wives and children, introducing them to one another and to South Africa. The congregation also helped to cover school costs when the Eritrean government cut the programme two years later after students began publicly criticising the regime’s human rights policies.

“It was very nice,” says Feven. “We met so many people from different cultures.”

But, with the drop in subsidies, it became increasingly difficult to afford Stellenbosch. At the end of 2003 they moved closer to Cape Town while Bereket finished his master’s degree and searched for jobs. He came close to getting one with Maersk Sealand for which his advanced studies in maritime economics qualified him, but his uncertain asylum status got in the way. The company didn’t want to take a chance on him if he might not be able to stay.

Faced with this, he, like many Eritrean refugees, turned to petty trading, “throwing my degree aside”, he says. He worked as a street vendor selling clothing, T-shirts and bags.

But ever an ideas man, he soon saw and seized an opportunity to expand his business and to help other vendors by organising a supply chain and opening a small shop of his own.

Next came a second shop in Cape Town, which Feven runs today. Then a Greenmarket Square restaurant, a coffee shop and an internet café. In 2008, he got formal refugee status.

Today, the family is prospering. Their two boys, now 14 and 15, are doing well in school, especially in maths and science. But throughout their trials and their success, Feven and Bereket have longed for home.

“I don’t want to live in any other country,” says Feven. “That’s why we stay in Africa.”

“I would go back tomorrow,” adds Bereket. “But I have to smell the fruits of real change – freedom of movement, free expression. I don’t need any more than that.”