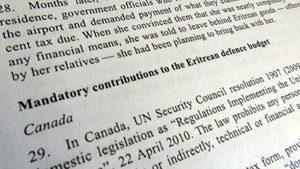 There are calls to expel Eritrea’s top diplomat in Canada because he presides over a system that’s milking money from the Eritrean community in this country.

Evidence obtained by CBC News suggests Consul Semere Ghebremariam O. Micael is again soliciting taxes despite a threat by Canada eight months ago not to renew his credentials if he kept at it.

But one Eritrean in Toronto, who has asked not to be identified, tells the CBC it was business as usual just a few weeks later when he had to pay