Approximately 1,000 East African asylum seekers protest ahead of expected forced removal to third countries Chanting “We are human beings!” and “Remember your history!”, more than 1,000 Eritrean asylum seekers gathered outside of the Rwandan embassy 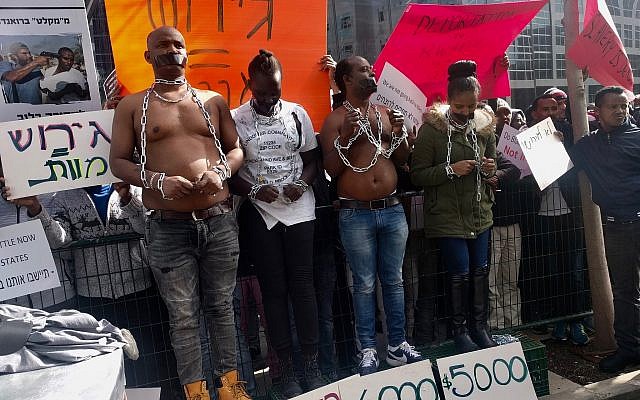 Chanting “We are human beings!” and “Remember your history!”, more than 1,000 Eritrean asylum seekers gathered outside of the Rwandan embassy in Herzilya on Monday to protest planned forced deportations of African refugees to third countries said to be Uganda and Rwanda.

Last month, the Knesset approved an amendment to the so-called Infiltrator’s Law mandating the closure of the Holot detention facility and the forced deportations of Eritrean and Sudanese migrants and asylum seekers starting in March.

“We are here today to demonstrate against the arrangement between Israel and Rwanda to deport us for money,” said Halefom Sultan, a 33-year-old father of two from Eritrea who has been in Israel since 2009. “We cannot go back to Eritrea, and Israel knows this, but we should not have to go to Rwanda. Israel has the ability and responsibility to give us safety,” he said.

There are approximately 38,000 African migrants and asylum seekers in Israel, according to the Interior Ministry. About 72 percent are Eritrean and 20 percent are Sudanese, and the vast majority arrived between 2006 and 2012. Many live in south Tel Aviv, and some residents and activists blame them for rising crime rates and have lobbied the government for deportation.

Prime Minister Benjamin Netanyahu on Sunday said the tens of thousands of Africans who are living in Israel illegally are not legitimate refugees or asylum seekers, but instead are economic migrants.

“They aren’t refugees,” Netanyahu told his ministers at the start of the weekly cabinet meeting. “Or at least most of them aren’t.”

“Most of them are looking for jobs,” he asserted.

Sultan said he wasn’t surprised to see the large turnout of refugees in front of the Rwandan embassy. Sultan graduated with a bachelor’s in business accounting and worked as an accountant in Eritrea before fleeing in 2008, but many Eritreans, including Sultan, work minimum-wage, manual labor jobs, since they do not have legal work permits. He said the situation has made refugees depressed and terrified, so many left work in the middle of the day to demonstrate.

“We have power as a community and together we will stop the deportations,” one of the protest leaders yelled into the megaphone, leading the demonstrators in chants as they raised their arms above their head in imaginary handcuffs. “We are not poor and weak, we are strong together. We are not infiltrators. We are human beings, we are asylum seekers,” the crowd chanted in unison.

Organizers also held a mock “sale” of refugees in the style of a slave auction. Just three residents of South Tel Aviv who support the deportations showed up to counter-protest, but their voices were quickly drowned out.

“I want to tell the Israeli public they shouldn’t keep quiet, each person needs to play their part in showing compassion and humanity to helpless and vulnerable people, to give shelter to disadvantaged communities, because we have no one else,” said Sultan. Sultan said he believes Netanyahu is manipulating weak communities in Israeli society, such as Israeli residents of south Tel Aviv, in order to shore up support for his government.

“My heart goes out to the [veteran Israeli residents] of south Tel Aviv,” said Sultan. “Remember, we didn’t choose to be here, the government sent us here, by giving me a bus ticket directly to south Tel Aviv. The government denies us driver’s licenses and work permits, which means I am dependent on buses and employment agencies, both of which are in the area of the Central Bus Station, so that’s where I need to be, too. It’s not our choice to live here; we’re forced into south Tel Aviv.”

Sultan believes the slogan used by veteran Israeli residents who support the deportations, “Rehabilitation begins with deportation,” is misleading. “Even if we’re forced to go, it will still be a bad situation in south Tel Aviv. It was bad before we came.”

“The government is manipulating people about the hard life of [Israelis] in south Tel Aviv rather than improving the situation,” he added.

About 100 Israelis joined in the protest, including 10 students in a pre-army preparatory year in Jerusalem who are organizing a demonstration against deportations in Jerusalem for February 1.

“We’re really trying to raise the awareness of people in Jerusalem, because a lot of people in Jerusalem don’t feel connected to the issue at all,” said Amit Shamir, a 19-year-old participant in the Yerushalmit Mechina. “People think because it’s not in their backyard it doesn’t concern them,” said Shamir. “Because this issue is felt so much more in south Tel Aviv, they think, ‘this is their problem.’ But we need to bring awareness to Jerusalem too, because that’s where the Knesset is.”

Many of the demonstrators held signs of Eritrean refugees who were deported from Israel to Rwanda and died while trying to get to safety in another country. There are no records of refugees who have successfully stayed in Rwanda. Asylum seekers and migrants deported to Rwanda have told The Times of Israel they are placed in transports and dropped off at an international border in the middle of the night, without documents, and told to cross illegally.

Helen Kidane, the director of the Eritrean Women’s Community Center, said they think 10 to 20 Eritreans who were deported from Israel in the past years have died while looking for safety in another country. “If Rwanda is so safe like Israel says, then why don’t refugees stay there?” she asked.

Two deported migrants were killed by the Islamic State terror group in Libya, on their way to attempt a dangerous Mediterranean sea crossing to Europe.

Kidane said she was heartened by local initiatives such as the Anne Frank Home Sanctuary Movement. Last week, Rabbis for Human Rights, led by activist Rabbi Susan Silverman, announced that they would personally hide asylum seekers facing deportation in their homes. The movement has inspired a fierce debate in Israel about whether the initiative’s use of Holocaust references and Anne Frank is appropriate or divisive.

Many demonstrators on Monday carried signs with photos of concentration camps or other Holocaust references.

“[The Anne Frank Home Sanctuary Movement] shows that a lot of Israeli people support us and feel the meaning of refugees,” said Kidane. “We know that this abuse doesn’t come from the people, but from the government.”

Also on Monday, three El Al pilots announced on Facebook they would refuse to fly deported asylum seekers to their destinations. German pilots used the same tactic to stop 222 planned deportations from Germany to places like Afghanistan. The act is mostly symbolic since El Al does not fly directly to Rwanda or Uganda, and deported migrants usually fly on other airlines through Ethiopia or Jordan. Netanyahu said in November he hopes to start direct flights from Tel Aviv to Kigali.